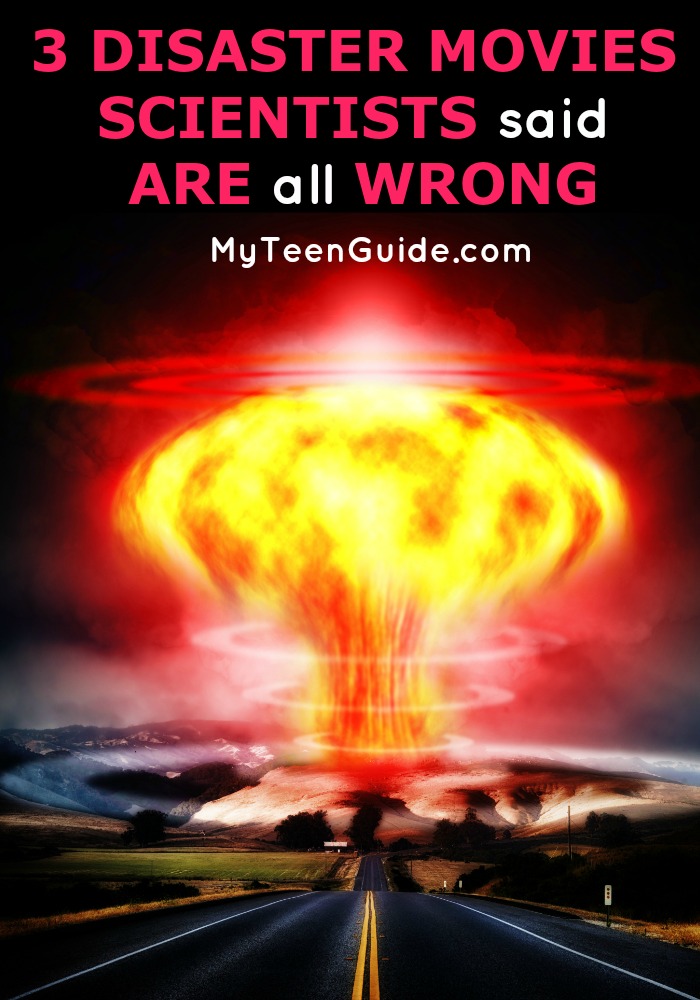 If you are a fan of disaster movies or love a good science fiction movie, then you may not know that the science in these movies can  sometimes be horrible. While some movies simply bend the rules of science, others movies are completely ignoring science! I have a hard time watching movies that just don’t make sense. I’m cool with movies that lay down a set of science rules and then follow them (hello magical fantasy movies!), but you have to follow your own movie rules consistently! Here are some disaster movies that scientists said are simply all wrong. Some of these have real palm-face moments!

Volcano is a 1997 disaster movie, starring Tommy Lee Jones, Don Cheadle, and Anne Heche. Jones plays the role of Mike Roark, the head of the Los Angeles County Office of Emergency Management, who tries to redirect the lava flow path of a volcano that is flowing through Los Angeles. The scientific problem with this movie? It is not possible for a volcano to form underneath the city of Los Angeles. Ronald Charpentier, a United States Survey geologist, said, “Volcanoes are located where there is a source of magma…Los Angeles and Southern California may have a lot of potential for earthquakes, but are probably safe from volcanoes for a while.”

Related: 5 Good Movies With Endings That Are The Absolute Worst

Armageddon is a 1998 science fiction, thriller, and disaster movie. It starred Bruce Willis, Ben Affleck, Liv Tyler, Billy Bob Thornton, Will Patton, Owen Wilson, Michael Clarke Duncan and Steve Buscemi. Armageddon showcases a team of deep-core drillers that are sent by NASA to stop a large asteroid from colliding with Earth. While the movie’s director, Michael Bay, did consult with NASA on this movie, the scenario regarding the huge asteroid is pretty far-fetched. Scientist David Kirby stated, about the fact that the asteroid is said to be the size of Texas and is due to strike Earth in 18 days, “That line of dialogue is just crazy. Any astronomer would tell you, if you have an asteroid the size of Texas, it would have been visible probably years before.”

Related: How Many Action Movies Like Independence Day: Resurgence Have You Seen?

San Andreas is a 2015 disaster movie, starring Dwayne Johnson, Carla Gugino, Alexandra Daddario, Paul Giamatti and Will Yun Lee. Dwayne Johnson stars as Ray Gaines, a member of the Los Angeles Fire Department Air Rescue, makes the harrowing journey across California, with his ex-wife Emma, played by Carla Gugino, to rescue their daughter, Blake, played by Alexandra Daddario, after an earthquake hits. Dr. Lucy Jones, an expert seismologist with the United States Geological Survey, stated about the tsunami that occurred after the earthquake, “One: It can’t happen at all from the San Andreas fault. Two: It was way too big. There’s no way there will ever be a tsunami that hops over the Golden Gate Bridge.”

Have you watched these disaster movies? Did you notice the terrible science? Are there any disaster movies that miss the science so badly it makes you cringe? Tell me what you think down there in the comments