The “Angelina Jolie Leg” was in full effect at the 2016 #Oscars. And other fashion trends: https://t.co/1RFcLq7mSf pic.twitter.com/ZGt3lgM0h6

Chris Rock, tonight’s host of the 88th Annual Academy Awards , does his open monologue. Okay, I understand that there were no black nominees in this year’s Oscar Awards but Chris Rock has gone too far if you ask me. His entire monologue was about black people and white people. I am extremely disappointed! It is fine for him to mention the fact about the nominees but to make the whole show about it is just wrong! I think that some of the statements he made were just rude, like “The White People’s Choice Awards” and “I counted at least 15 black people in that montage.” 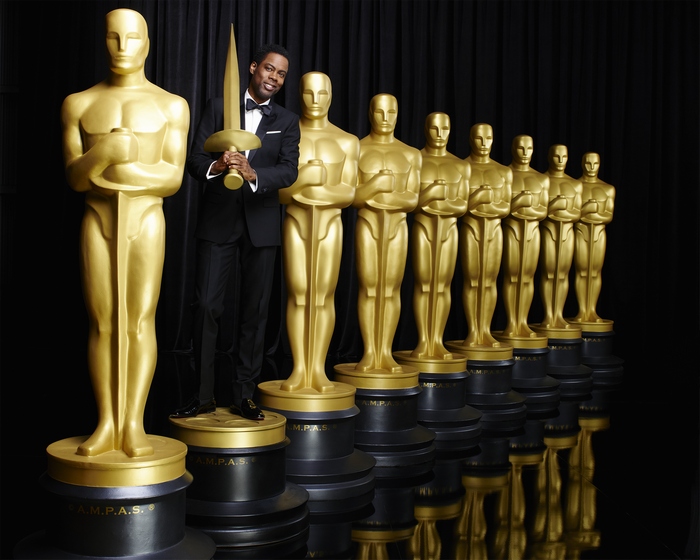 The first presenters of the 88th Annual Academy Awards  are Emily Blunt and Charlie Theron, presenting the award for Best Original Screenplay, presented to Spotlight. I actually saw this movie and thought it was very good but controversial at the same time.

Sarah Silverman introduces one of the nominees for Best Original Song, Sam Smith for his song Writings on the Wall from the movie Spectre. He did an amazing job. I love his voice and his talent.

Henry Cavill and Kerry Washington showcase 2 of the nominees for this year’s Best Picture: The Martian and The Big Short. Both amazing movies!

J.K. Simmons presents the award for Best Supporting Actress to Alicia Vikander for her role as Gerda in The Danish Girl.

Cate Blanchett presents the award for Best Costume Design to Mad Max: Fury Road. Haven’t seen this movie yet and it’s really not my kind of movie but I do have to admit, it has great costume design.

The award for Best Makeup and Hairstyling was presented by Margot Robbie and Jared Leto to (wait for it) Mad Max: Fury Road. Wow, was this movie really that good?

Benicio Del Toro and Jennifer Garner showcase 2 of the nominees for this year’s Best Picture award: Mad Max: Fury Road and The Revenant. I love The Revenant and I love love love, Leonardo DiCaprio.

Rachel McAdams and Michael B. Jordan presented the 7th award of the night for Best Cinematography to The Revenant. OMG! No Mad Max here! So happy for The Revenant, though.

The award for Best Film Editing was presented by Liev Schreiber and Priyanka Chopra to Mad Max: Fury Road. (And the trend continues). I love Priyanka for her role in the TV show Quantico.

Andy Serkis, remember him as Gollum from The Lord of the Ring movies, presented the award for Best Visual Effect to Ex Machina. Honestly, I have never even heard of this movie until now.

Guess who is on stage to present the award for Best Animated Short Film? THE MINIONS! I love them! Anyways, the award went to Bear Story.

Oh hey, it’s Woody and Buzz Lightyear from Toy Story! I can’t believe it has been 20 years since the first Toy Story movie came out. WOW! Anyways, they presented the award for Best Animated Feature Film to Inside Out! That is such a good movie. If you haven’t seen it yet, you really need to.

Kevin Hart takes the stage to introduce another nominee for Best Original Song. The Weekend sings his song Earned It from Fifty Shades of Grey. I like The Weekend but I really didn’t like the movie.

Reese Witherspoon and Kate Winslet showcase 2 more nominees for Best Picture: Bridge of Spies and Spotlight! I love Spotlight. Good movie. I haven’t seen Bridge of Spies but I love Tom Hanks. Such a talented actor.

The award for Best Supporting Actor was presented by Patricia Arquette to Mark Rylance for his role as Rudolf in Bridge of Spies. I was really hoping that Mark Ruffalo would win. He is so talented.

Louis C.K. presents the award for Best Documentary- Short Subject to A Girl in the River.

The award for Best Documentary- Feature was presented by Daisy Ridley and Dev Patel to Amy. I saw this documentary, about the late Amy Winehouse and it was really good. Well-deserved award!

Louis Gossett Jr. introduces Dave Grohl, from Nirvana and The Foo Fighters, who plays guitar during the In Memoriam segment, which showcases those we have lost recently including Christopher Lee, Alan Rickman, Wes Craven, David Bowie and Lenard Nimoy. Very emotional yet beautiful piece.

The 17th award of the night for Best Live Action Short Film was presented by Jacob Tremblay and Abraham Attah to Stutterer. Tremblay and Attah are both young and very talented actors.

Sophia Vergara and Bhung-hun Yee presented the award for Best Foreign Language Film to Son of Saul. Son of Saul is a Hungarian film.

Vice president Joe Biden takes the stage to introduce Lady Gaga. She is nominated and performed her song, for Best Original Song, Till It Happens to You from The Hunting Ground. WOW, what an emotional and deep performance. At the end of the performance, campus rape survivors appeared on stage. Lady Gaga is so amazing. She is so talented and emotional in her performances.

Quincy Jones and Pharrell Williams present the award for Best Original Score to The Hateful Eight.

The award for Best Original Song was presented by Common and John Legend to Sam Smith for Writings on the Wall from Spectre. I was really hoping Lady Gaga would take this award.

The awards are already on overtime and it is time for the final 4 awards of the night.

JJ Abrams presents the award for Best Director to Alejandro G. Inarritu for The Revenant. This is a good sign that the movie might win for Best Picture. Fingers crossed!

Eddie Redmayne presents the award for Best Actress to Brie Larson for her role as Joy “Ma” Newsome in Room. She is talented and did a great job in the movie.

Julianne Moore presents the award for Best Actor to Leonardo DiCaprio for his role in The Revenant as Hugh Glass. OMG! Are you kidding? This was such a long time coming and so well deserved.

Morgan Freeman presents the award for Best Picture to Spotlight! I am not sure anyone was expecting this. I was thinking The Revenant or Room would win.

“The Hunting Ground” – “Til it Happens to You”

“Boy and the World”

“When Marnie Was There”

“The Look of Silence”

“Embrace of the Serpent”

“We Can’t Live without Cosmos”

“Chau, Beyond the Lines”

“Claude Lanzmann: Spectres of the Shoah”

“A Girl in the River: The Price of Forgiveness”

“Everything Will Be Okay (Alles Wird Gut)”

Did you catch up on The 88th Annual Academy Awards? What was your favorite moment?