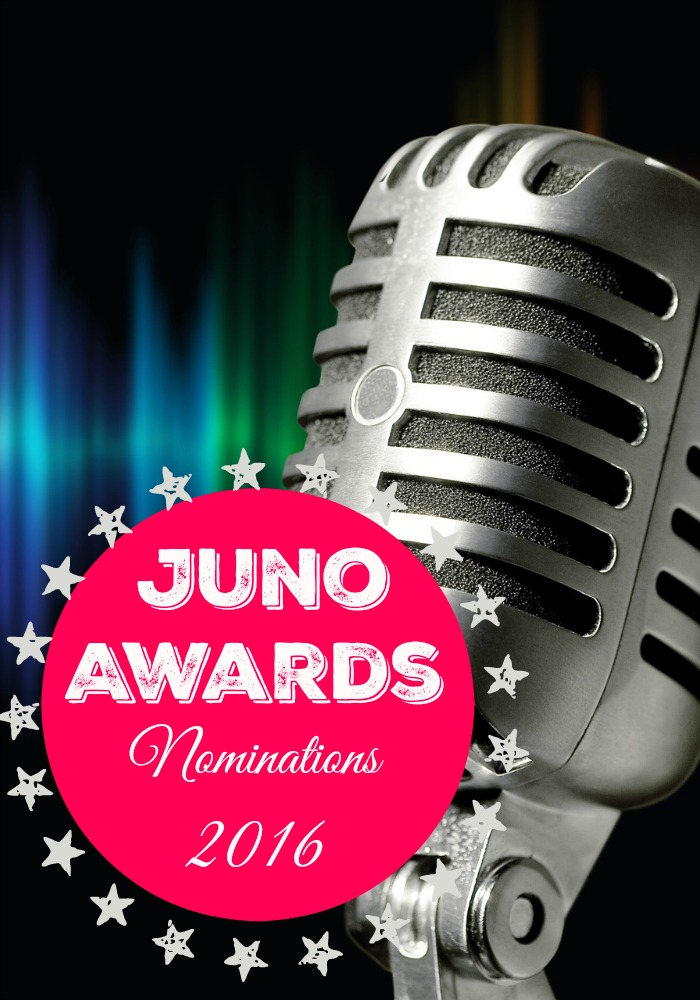 The 2016 Juno Awards nominees are in, and we have all the details! The Juno Awards is a MAJOR Canadian music awards show. Canada has such an amazing music scene. If you are not familiar, there are so many good Canadian musicians both well known and indie that you should catch. Are you a fan of Justin Bieber? What about Drake and Carly Rea Jepsen? Check out all the nominations for these prestigious awards, and I’m sure you will recognize a few amazing artists who are up for an award this year.

Here are some details on the 2016 Juno Awards show! The 2016 Juno Awards will be held April 2 and April 3 of 2016. The ceremony is held at the Saddledome in Calgary and includes some megastars this year. Some of the artists who will be performing at the awards including new sensation Alessia Cara, Bryan Adams, Dean Brody, Shawn Mendes, and The Weeknd. The nominees for the Juno Awards were announced on February 2, 2016, and below we have the full list of all of the 2016 Juno Awards Nominees.

Looking at the list a bit this year, I was a bit confused. We seem to be having trouble here, where are all the GIRLS?!?! Canada’s Juno Awards 2016 nominations def seem to be a bit heavier on the guys this year and I’m not the only one noticing. The lead of the music group Grimes took to Twitter to express her frustration with the lack of women. Others are criticizing Grimes of throwing a public fit online. Thoughts?

Leading the pack this year for the most nominations include Weeknd, Drake, Justin Bieber & Shawn Mendes. Weeknd picked up six nominations while Drake and Bieber each scored themselves five nominations. Shawn Mendes and Alessia Cara both are next in line with four nominations, including a breakout artist nod for Alessia Cara.

It was so cool that astronaut Chris Hadfield announced the 2016 Juno Awards fan choice award! Though the astronaut is not a professional musician, I think singing David Bowie from The International Space Station broadcasted around the world through social media makes him more than qualified! If I were making a prediction, I would say it is probably down to Bieber, Shawn Mendes and Drake, but I may be surprised. I love The Weeknd, Alessia Cara is rocking her own sound pretty hard, and Walk Off The Earth also kills it pretty hard.

I also LOVE Cœur de pirate (translated: Heart of A Pirate.) Their sound is so chic and cool, though with some other bigger names I think they may be knocked out of this race. The music is amazing and totally transcends language which is what good music should do!  You can’t miss the meaning of this video, even if you don’t speak French! Tres cool!

SINGLE OF THE YEAR

Just in case you haven’t heard Bieber’s song, I’m throwing it in here for our listening enjoyment. This category is a tight race, but I think it’s probably between Bieber, The Weeknd and Drake. Shout out to Alessia Cara, I like her sound too.

INTERNATIONAL ALBUM OF THE YEAR

TBH, Adele has to have this. Her album gives me chills every time. I live many of the other artists listed her also; I think Megan Trainor or One Direction is probably sliding into second place, but I don’t have a crystal ball. I will be sad if Adele misses this one! For your ears, I couldn’t resist:

ALBUM OF THE YEAR

I want to root for The Weeknd because their music is more my style, but Drake is killing it. Someone called me on my cellphone; he may be taking some 2016 Juno awards home this year.

I’m not sure I can even comment here. So.Many.Good.Artists!

GROUP OF THE YEAR

Anyone else rooting for Hedley? I am for their quirky pop style Three Days Grace is a rock force that’s hard to argue with. Metric has a fun style too that really picks you up.

BREAKTHROUGH ARTIST OF THE YEAR

BREAKTHROUGH GROUP OF THE YEAR

SONGWRITER OF THE YEAR

COUNTRY ALBUM OF THE YEAR

Team Dean Brody all the way, I love Bring Down The House. “Y’all hashtag this” Buwahahaha, this artist is awesome. I’m not sure if he is going to win the 2016 Juno awards, but I had to shout out to my fav.

ADULT ALTERNATIVE ALBUM OF THE YEAR

Anyone else out there hoping Whitehouse will take this one? I’m keeping my fingers crossed. I like Mo Kenney’s indie sound also.

ALTERNATIVE ALBUM OF THE YEAR

POP ALBUM OF THE YEAR

It is going to be a tough fight in this category with lots of competition from Bieber and Shawn Mendes. I srsly hear Shawn Mendes song “Stitches” everywhere, and it never feels overplayed which is the mark of a good song.

I think Walk Off The Earth has a fighting chance. If you haven’t seen their YouTube channel, they do hilarious covers of other bands and comedy videos.

ROCK ALBUM OF THE YEAR

Nickelback is up again? Who knew! I’m rooting for The Sheepdogs though I like Matthew Good’s music quite a bit too. Matthew Good’s sound reminds me a bit of the smooth sounds Coldplay has, but with his own twist.

VOCAL JAZZ ALBUM OF THE YEAR

JAZZ ALBUM OF THE YEAR: SOLO

JAZZ ALBUM OF THE YEAR: GROUP

INSTRUMENTAL ALBUM OF THE YEAR

FRANCOPHONE ALBUM OF THE YEAR

CHILDREN’S ALBUM OF THE YEAR

CLASSICAL COMPOSITION OF THE YEAR

RAP RECORDING OF THE YEAR

DANCE RECORDING OF THE YEAR

R&B/SOUL RECORDING OF THE YEAR

REGGAE RECORDING OF THE YEAR

ABORIGINAL ALBUM OF THE YEAR

CONTEMPORARY ROOTS ALBUM OF THE YEAR

TRADITIONAL ROOTS ALBUM OF THE YEAR

BLUES ALBUM OF THE YEAR

CONTEMPORARY CHRISTIAN/GOSPEL ALBUM OF THE YEAR

WORLD MUSIC ALBUM OF THE YEAR

JACK RICHARDSON PRODUCER OF THE YEAR

RECORDING ENGINEER OF THE YEAR

RECORDING PACKAGE OF THE YEAR

VIDEO OF THE YEAR

ELECTRONIC ALBUM OF THE YEAR

HEAVY METAL ALBUM OF THE YEAR

ADULT CONTEMPORARY ALBUM OF THE YEAR

So lovelies, which are your fav bands? Did you discover any new music to add to your playlist? What are your predictions for the 2016 Juno Awards winners? Tell me in the comments!