These 9 IT movie quotes are so terrifying that they’ll make you want to hide your eyes before you even see the movie! Check them out! 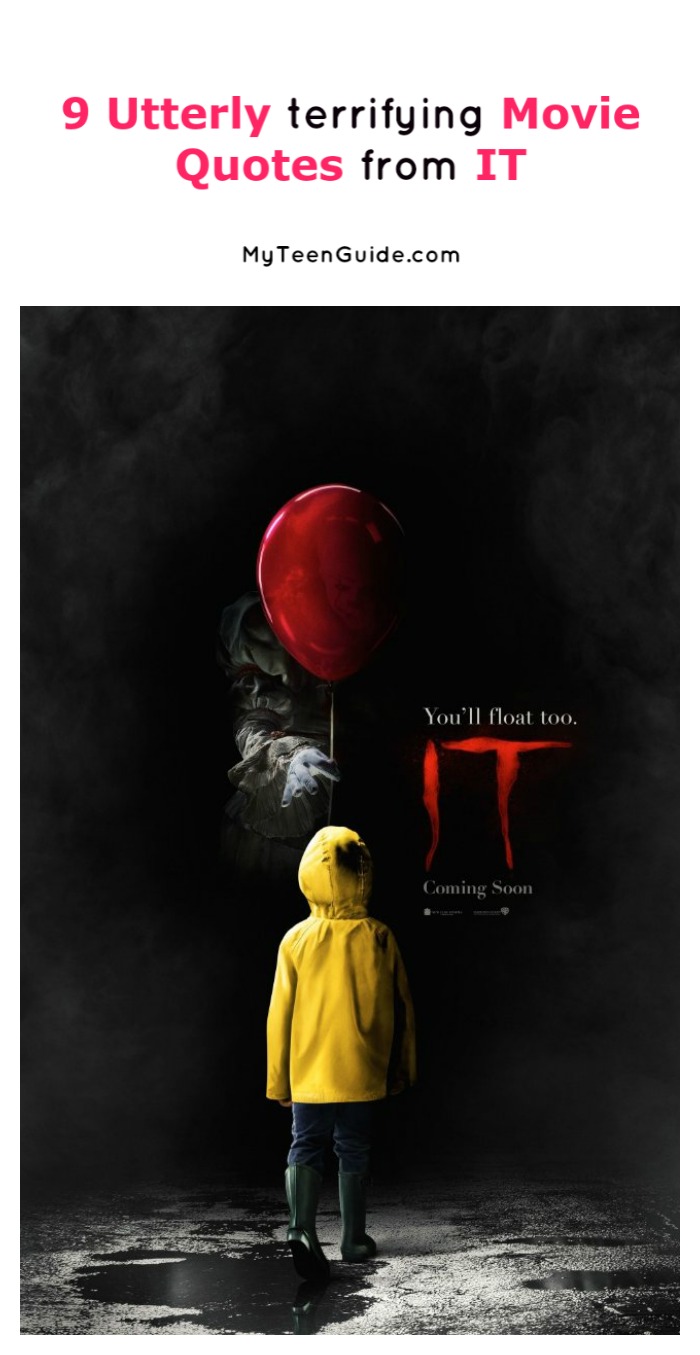 IT is a supernatural horror movie that will be released in theaters on September 8, 2017. The movie is based on the popular 1986 book- of the same name- by Stephen King. The original movie terrified me so much that I literally slept with the lights on for a year. I can’t even imagine how horrifying this one will be! Check out the trailer, then read on for some quotes from the 2017 movie trailer as well as from the 1990 miniseries.

IT Movie Quotes from the 2017 Trailer

1- Conversation, in the opening of the movie trailer, between Bill Denbrough and his younger brother, George Denbrough:

Bill- “There you go. She’s already captain.” As he hands George a paper boat he has made for him.

2- Ben Hanscom, in a voiceover, talking about the fictional town of Derry, Maine:

Ben- “Derry is not like any town I’ve been in before. People die or disappear, six times the national average. And that’s just grown-ups. Kids are worse. Way, way worse.”

The role of Ben is played by Jeremy Ray Taylor.

3- A creepy, young girl, as a voiceover:

Young girl- “We all float down here.”

4- Conversation between Bill Denbrough and Eddie Kaspbrak, after a group of boys, known as The Losers because they are outcasts, go looking around the sewer:

Bill- “I saw something. There was this…”

The role of Eddie is played by Jack Dylan Grazer.

5- Bill Denbrough, talking to the rest of The Losers, as they look at a map of the town on a movie projector:

Bill- “Look, it’s all connected by the sewers. That’s where IT lives!”

6- Beverly Marsh, as the movie projector starts flipping through the slides on its own:

The role of Beverly is played by Sophia Lillis.

7- Conversation between “George” Denbrough and his older brother, Bill Denbrough, as Bill sees the ghost of George in their home’s flooded basement:

George- “Bill? If you’ll come with me, you’ll float too.”

Quotes from the 1990 Miniseries

“I’m every nightmare you’ve ever had. I’m your worst dream come true. I’m everything you ever were afraid of.”

In the miniseries, Tim Curry played the role of Pennywise.

9- Conversation between Pennywise and Bill Denbrough:

Pennywise- “Take your pick, B-b-b-Billy boy. Oh, except for the one on the end, that’s already taken. Sorry.”

Bill- “I remember you, and I remember we beat you. I’m not afraid of you.”

Richard Thomas plays the role of Bill in the miniseries.

Well, now, I’m adequately terrified, how about you? Remember, IT opens on September 8th. I highly recommend grabbing your movie tickets before you go so you’re not stuck waiting in line! Especially if the line is outdoors. You don’t want to get stuck standing too close to a sewer grate!

Do you have any favorite IT movie quotes from either version? Share below!