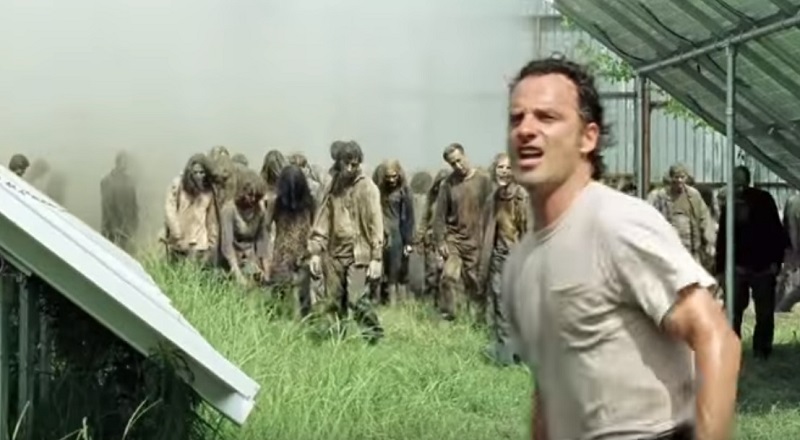 Last night’s Walking Dead season 6 episode 8 was the last new episode until February. And as with all other winter and season finales, they didn’t disappoint! Miss it? Check out our recap and get caught up!

So the episode starts off with the tower falling (this was the end of last week’s episode) and the walkers making their way into Alexandria. Rick tells the residents to get off the streets and into their homes. Everyone makes it into their homes, except for Rick, who is shooting the walkers and Deanna, who falls down and ends up getting bit by a walker and a few others. Now, I don’t know about anyone else but I saw this coming, sort of. It was kind of written in black and white that at some point Rick was going to become the new leader of Alexandria. Anyways, Maggie gets attacked by walkers but she is not bit and ends up kicking them away and getting to safety unharmed.

So, remember at the end of the episode two weeks ago where someone can be heard calling for help? That was Eugene calling for help. Eugene, Rosita and Tara hide inside a garage.

Rick is tending to Deanna, while Jessie is shooting the walkers that are attempting to approach them. Wow, way to go Jessie.

Glenn and Enid know about the walkers invading Alexandria. Glenn wants to go inside but Enid doesn’t. Glenn is determined to go in because Maggie is in there and she is pregnant with his child so one way or another he will get in.

Denise, meanwhile, is in the basement with the Wolf. Turns out the Wolf wasn’t bitten but he just has some sort of infection. He got cut when trying to break into a vehicle.

So, as we all know, if you are bit, you won’t survive so Deanna’s fate is pretty much sealed. Even as she was dying, Deanna was smiling and being thoughtful of others. She talks to Michonne about what she wants for herself, Michonne doesn’t really know and Deanna tells her she better know.

Ron is upset because he thinks Enid is dead. He blames Carl’s dad for people getting killed, calling him a killer. Carl responds by calling Ron’s dad a killer too. Not exactly the appropriate time to have this little spat. Carl, clearly the level headed one of the two, says they need to work all this out. Ron and Carl end up getting into a fight, Ron picks up a shovel, swings it into the glass and lo and behold here come a bunch of walkers. Rick shows up just in time to help the boys fight off the walkers. However, it doesn’t end the bickering between Ron and Carl. So, bottom line is that Carl didn’t like Ron’s dad and Ron doesn’t like Carl’s dad.

Rick sees Deanna leaning over Judith’s crib, he thinks she has already turned but in actuality, Deanna just wanted to see Judith before she passed on. She tells Rick that her plans are now his and her people are now his people. She gives Rick something she wrote for both Spencer and Maggie.

Carol makes her attempt to get to the basement to take out the Wolf. Really Carol? I am pretty sure that since the town is now being overrun by walkers, this time could be spent trying to kill them. I mean seriously, the Wolf can wait a few. The two end up getting into a struggle, Morgan knocks out Carol and then the Wolf knocks out Morgan. The Wolf then picks up a knife and points it right at Denise. Okay, so maybe Carol should have killed him.

The walkers finally gain entrance to the house, with Rick, Michonne and Father Gabriel ready to do battle with them. When they realize there are too many to fight off, they realize they need to leave and fast. And that means leaving Deanna there in the house, she knows she needs to be killed but she insists on doing it herself. Before they leave, Deanna tells Michonne to go get the walkers and win this.

The Wolf ends up using the knife to free himself, Denise begs him not to kill anyone. Then, Eugene, Tara and Rosita appear, guns drawn. But, since the Wolf has a knife held to Denise’s throat, he makes them surrender their guns. UGH! Why in the world does the bad guy always win? I mean come on, he has a knife, they have guns. Geez!

The group in the house, you know Rick and all them, have covered themselves in walker guts in order to disguise themselves. Okay, that is totally gross but it makes sense I guess.

Finally, Glenn and Enid climb a tree so they can get a view of what is going on in town and Glenn sees Maggie is surrounded by walkers.

And, instead of Deanna shooting herself, she decides to use the bullets to kill walkers that are approaching her. Hmm…does that mean she will become one of them now?

The Walking Dead will return with new episodes on Sunday, February 14th.

Did you catch Walking Dead season 6 episode 8? What did you think of this mid-season finale?