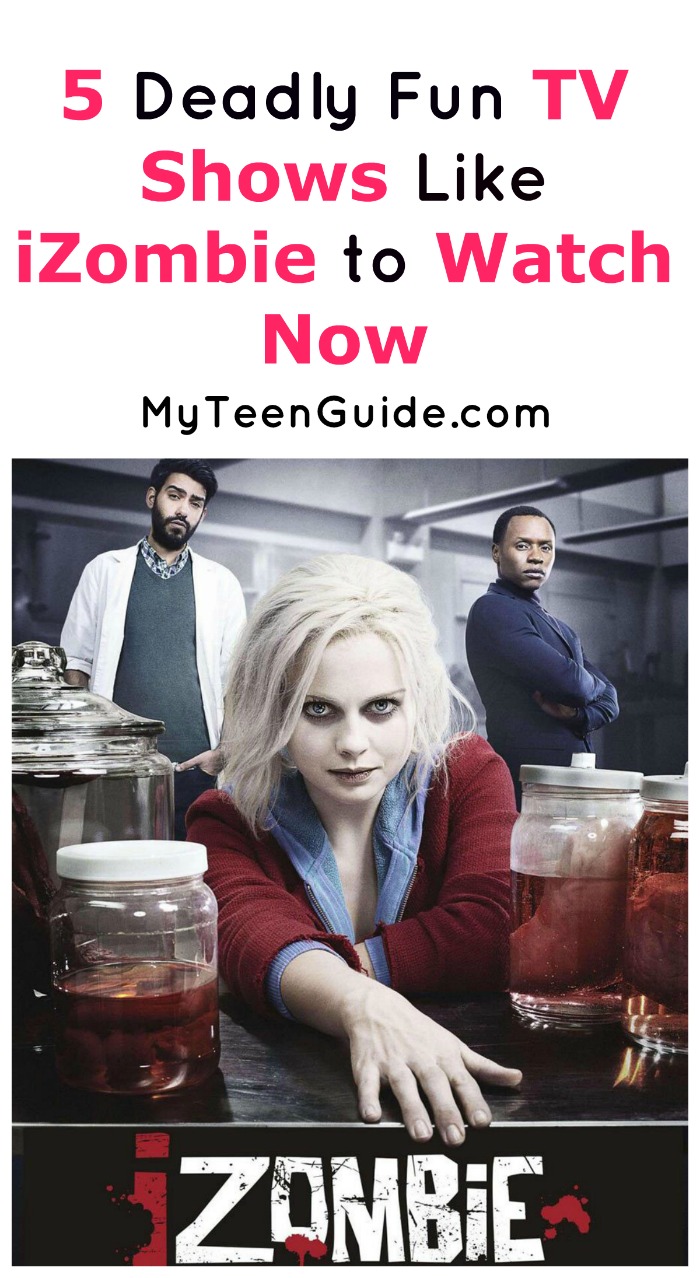 Looking for more deadly fun TV shows like iZombie? We’re sharing give of our favorites that we think you’ll love!  iZombie is a crime, horror, drama, comedy television series that has aired on The CW for 2 seasons, premiering on March 17, 2015. It is loosely adapted from the DC comic book of the same name by Michael Allred and Chris Roberson. The series focuses on Olivia Moore, a medical resident who is transformed into a zombie while on a boat party. iZombie stars Rose McIver as Olivia. Here are some other TV shows like iZombie.

is a television series that combines action, horror, comedy and drama. It has aired on Syfy for 3 seasons, premiering on September 12, 2014. The series is set three years after a zombie virus has killed most humans in the United States, except for one person, Alvin Murphy. Now, a group must take him from New York to a California lab. Z Nation stars Keith Allan as Murphy.

is a horror drama television series that has aired on AMC for 7 seasons, premiering on October 31, 2010. It is based on the comic book series of the same name by Robert Kirkman. The series focuses on Rick Grimes, a Sherriff deputy who awakes from a coma to learn a zombie outbreak has taken over the world. Now, he must lead a group of survivors to stay alive. The Walking Dead stars Andrew Lincoln as Rick Grimes.

Fear the Walking Dead is a post-apocalyptic horror drama television series that has aired on AMC for 2 seasons, premiering on August 23, 2015. It is the prequel to AMC’s series, The Walking Dead. The series focuses on a group of people trying to survive the zombie apocalypse. Fear the Walking Dead stars Kim Dickens as Madison Clark, Cliff Curtis as Travis Manawa, Frank Dillane as Nick Clark, Alycia Debnam-Carey as Alicia Clark, Mercedes Mason as Ofelia Salazar and Ruben Blades as Daniel Salazar.

is a supernatural, drama, horror television series that aired on BBC for 2 seasons, premiering on March 17, 2013 and ending on June 8, 2014. The series centers on Kieren Walker, a reanimated teenager who returns to his small village in Lancashire. In the Flesh stars Luke Newberry as Kieren.

is a fantasy, comedy, drama television series that aired on Showtime for 2 seasons, premiering on June 27, 2003 and concluding on October 31, 2004. The series centers on the life of Georgia Lass, who dies and comes back as a grim reaper. Dead Like Me stars Ellen Muth as Georgia. If you love sardonic humor, it’s a must-watch!