If you’re searching for epic spring party games for teens (and adults!), you’re going to love this list!

The right party games take your bash from “hey, that was a nice party!” to “wow, that was epic!”

Not only do they keep your guests entertained, but they also make for some monumental Instagram-worthy photo ops.

Read on for 20 hilarious, fun and (perhaps most important) easy spring party game ideas to play with your friends. 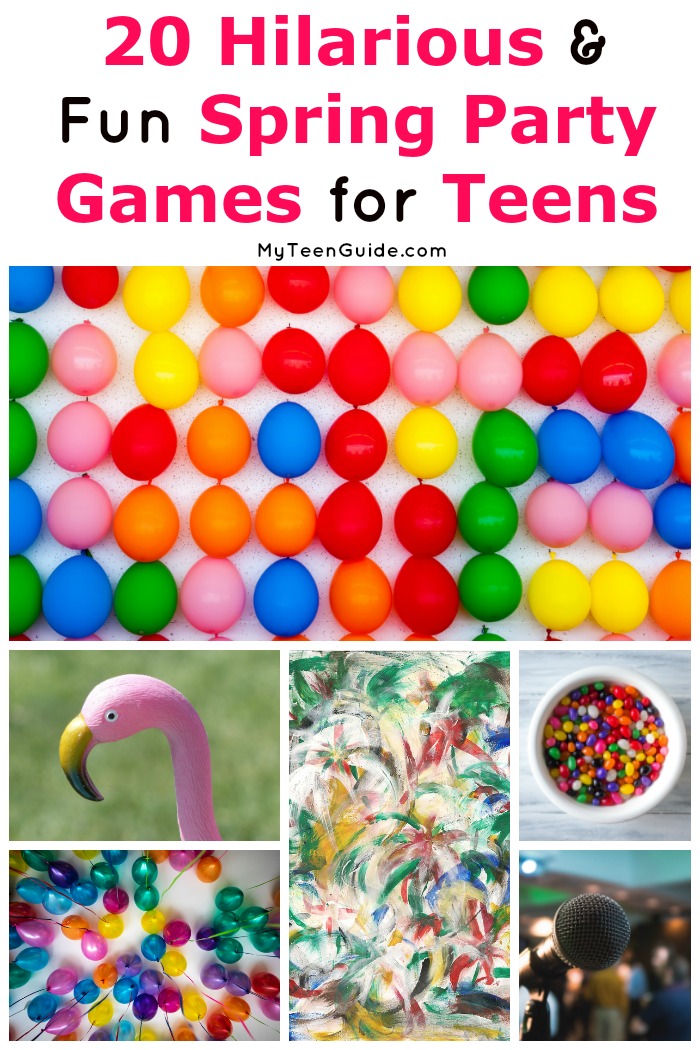 Since spring is pretty well-known for rainy days, we’ll break this up into two sections: indoor spring party games and outdoor games to play.

That way, if Mother Nature decides to throw a tantrum on party day, your bash won’t get ruined, check my site.

Affiliate links included below. If you make a purchase through these links, we earn a small commission at no extra charge to you. Thanks! 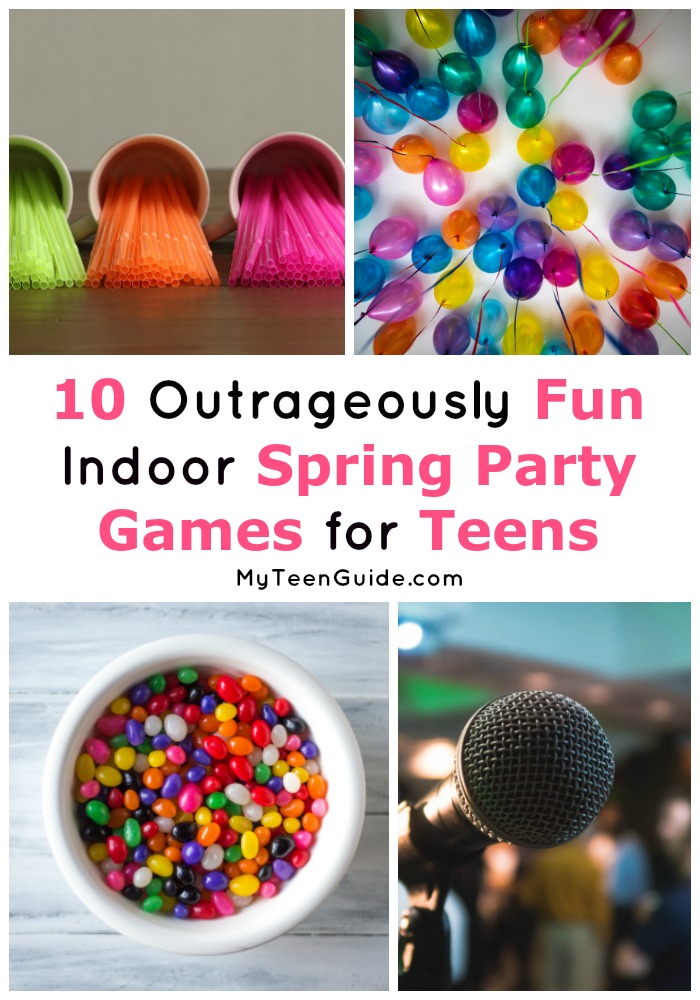 These 10 ideas are crazy fun yet easy on your home.

This party game has a lot of different names, including “Heads Up.” It’s an easy and cheap game that actually lasts throughout the whole party.

Another game with a myriad of options, “mouth only” races require participants to use, you guessed it, just their mouths to move an object.

Now, I’ve seen this played with everything from candy to paper bags. Please make sure it’s something sanitary! You don’t want your guests going home with the plague!

One idea that I love: a candy race. Here’s how to play:

Super important: throw out the candy when you’re done so no one accidentally eats someone else’s slobber. Ewwww!

3. Balloon Pop with a Twist

We’ve all played balloon pop at some point or another. You know, the game where you try to pop a balloon by sitting on it?

Well, same concept, but with a twist. Each balloon will hold a funny activity that the popper must do!

By the time the last balloon pops, everyone will be rolling on the floor laughing!

A twist on the giant tape ball game, this one requires a bit of work to prepare before the party, but it’s so much fun! Visit  swipenclean.com .

Thanks to Karaoke apps for smartphones, you don’t have to spend a fortune renting a machine for this fun spring party game!

Load up the playlist with songs that either have the word “spring” in the title or incorporate something from the season (garden, rain, flowers, etc).

A twist on the “corn pickers” game in the video above, this one uses jelly beans instead.

This is similar to the toilet paper mummy wrap game, except you’ll be using spring-colored streamers

(which are a lot cheaper than TP!)

8. Apples to Apples Board Game

This one does require buying the Apples & Apples

board game, but it’s so worth it.

First, though, let me say that this is my all-time favorite party game and I play it every chance I get. It’s so much fun to see how well you know your friends & family!

Basically, one person throws out a green card with a word on it, then players have to throw in a red card that they think most describes the green card.

The catch- they have to think like the other person. The “green card” player decides which red card best describes their opinion or definition of the word.

It’s hard to describe, but it’s crazy fun and everyone will be laughing by the end!

Let’s be honest: doing a jigsaw puzzle isn’t the most exciting party game…unless you turn it into a race!

For this game, you’ll need a couple of children’s spring jigsaw puzzles (find them at the dollar store), preferably either all the same or with the same number of pieces.

Charades is probably the easiest game on the planet to play, which is why it’s one of the most popular indoor party games!

For this version, make a list of spring-themed clues for people to act out! Some ideas include: 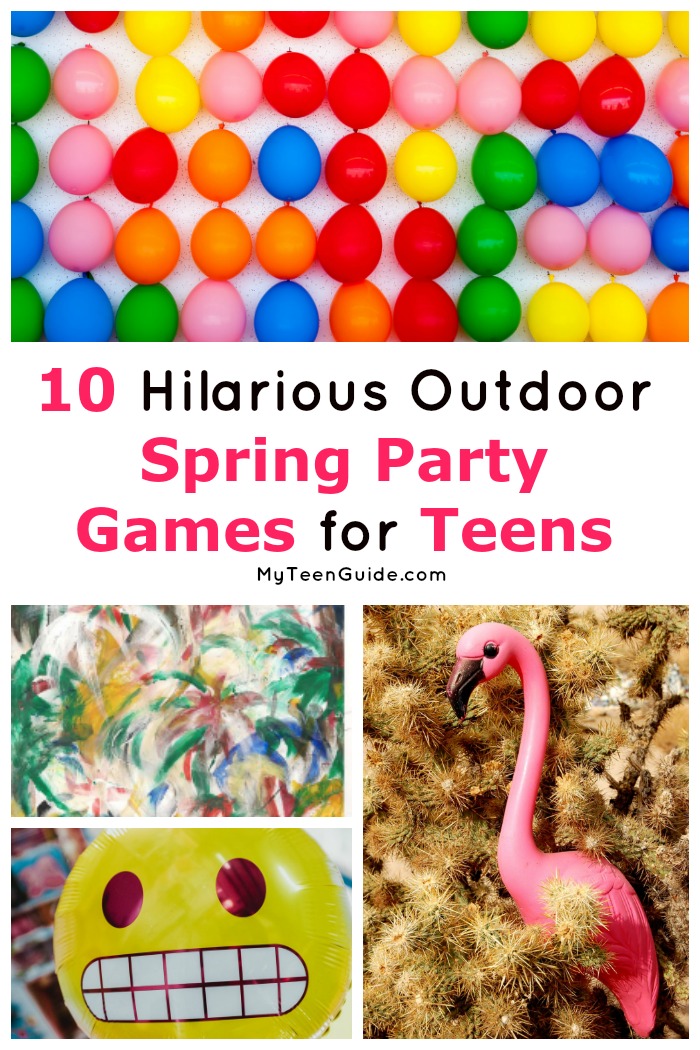 Outdoor spring party games leave a little more room for creativity because you don’t have to worry about messing up your house! I love to play these games with my friends and family!

Take advantage of the fresh spring air and newly sprouting buds for a fun scavenger hunt.

This one is a messy party game, but it’s SO much fun!

You can also do this with plain whipped cream, but the icing makes it a lot trickier.

I’m so disappointed because I thought I invented this myself, but it turns out it’s actually a popular outdoor party game!

Check out this video on how to build a backyard slingshot:

Kerplunk gets an outdoor spring party game makeover when you use bright-colored “ball pit” balls, some cheap chicken wire, garden stakes and a easy DIY base.

As always, these games are more fun (not to mention hilarious) when played with a blindfold on!  Learn how to make it here.

Nothing says spring to me quite like Alice in Wonderland, and we all remember that croquet scene played on with the poor flamingos!

Well, this version doesn’t use real flamingos, but it’s still hilarious and fun!

Check out the video below to learn how to play croquet:

Seriously, as long as you attach the balloons to something sturdy, anything goes. You can even use thick cardboard!

FYI, this is one game you should NOT play blindfolded! You can make it more fun by using water balloons, though!

In true carnival game fashion, you need prizes that no one would actually spend $15 on, yet can’t resist when it’s at a carnival. At least they don’t have to pay for these!

Here’s how to set it up with prizes:

Make giant scrabble tiles out of cardboard, then challenge players to get the highest score. The catch, they can only use words associated with spring.

Have an impartial judge on hand to work out disputes.

Another super messy game, this one is best played toward the end of the party. Here’s how:

Rubber duckies are another thing that reminds me of spring. Maybe it’s because the real ducks return to our lake during the season.

For this game, you’ll need some small or medium rubber duckies and a baby pool filled with water.

The goal is to get your duck to the other side the fastest just by blowing on it (hence then need for the smaller duckies).

I love this one because it’s easy to clean up.

All of these indoor and outdoor spring party games are sure to make your bash a blast! The hardest part is deciding which ones to play first!

Do you have any favorite spring party games? Share below!