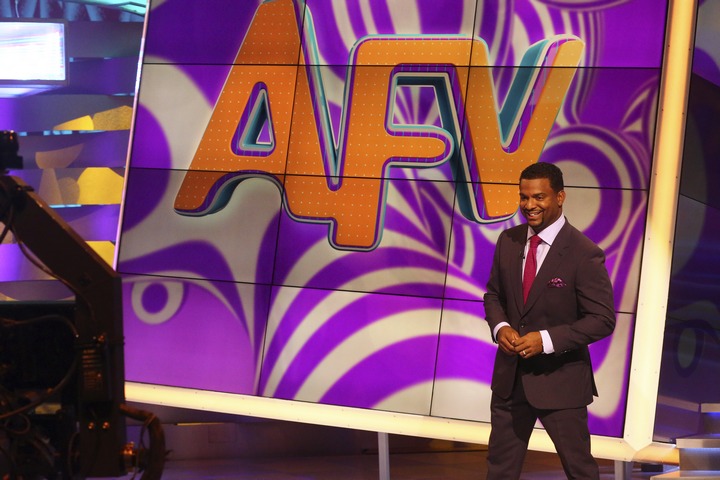 Last night’s episode of America’s Funniest Home Videos Season 26 Episode 5 was hilarious as usual! In case you missed it, we’re here with a recap to give you the highlights from night’s round of funny videos.  In addition to the “AFV” debut of Alfonso’s famous “Carlton” dance (loved it!!), this week’s video highlights include a couple attempting to take a seaside selfie when they are surprised by a wave, a man who thinks he is shooting video of a moose but doesn’t realize he’s actually recording himself, a man who has fallen asleep with a mouthful of popcorn, and more! Let’s check out the America’s Funniest Home Videos Season 26 Episode 5 recap and highlights!

Some of the funniest home videos of the night:

In a series of slow motion clips, two kids are playing on a slip n slide. One boy is on all fours backwards and the other boy tries to slide under him. Only he doesn’t slide all the way under him, instead he bumps him and knocks him over. Also, people were playing a game of volleyball. One person hits the ball over the net and it smacks the person on the other side of the net in the face.

In a montage of people getting shocked, a woman picks up a red camera from a table, looks at it and suddenly it shocks her. Also, a guy is sitting outside playing with a bug zapper on his chest when the zapper zaps his chest. And two guys are working on a light switch, when one guy pretends to get shocked, scarring the other guy.

Alfonso Does the Carlton!

As we know, Alfonso played Carlton on the TV hit show Fresh Prince of Bel-Air. People have been sending him messages for weeks to do his famous Carlton dance. He says he will do it tonight but only if the audience does it with him. The audience and Alfonso take part in the Carlton dance.

Tonight’s game is called Who’s Making That Racket? A sound is played and the players need to guess which of the three videos matches the sound. There are two players from the audience: Renee and Nivea.

Renee guesses #3, Nivea guesses #1 but the correct answer is #2.

Renee guesses #3, Nivea guesses #2 and the correct answer is #3, with Renee as the winner.

Renee guesses #1, Nivea guesses #2 and the correct answer is #2, with Nivea as the winner.

Both players get an AFV T-shirt!

Animals are so Funny!

In a segment with animal clips, there are two bears on a hammock in someone’s backyard when they both tumble off. Also, some ostriches are eating from a bucket that someone is holding when suddenly one of them grabs the wig off the woman.

In a montage video about cats, grandpa is sitting in the cat’s favorite chair. He shows his disapproval by sneaking up quietly on grandpa and jumping on him, startling him. Also, a cat is sitting on a window inside the home when another cat appears at the window on the outside. They both try attacking each other with the window being in the way.

A chinchilla is trying to climb on the toilet paper roll in the bathroom, when he slips and falls in the trash can, then quickly jumps out.

*A family is feeding a giraffe some carrots through their vehicle’s sunroof at a drive-thru safari. After having too many carrots, the giraffe drools all over the family and the vehicle’s interior.

In a series of clips with dogs playing with babies, a baby is in the bathtub with his dog and his rubber ducky toy. He puts the rubber ducky in the dog’s face and starts laughing hysterically. Also, a baby is sitting on the floor with his dog, his dog is catching bubbles in his mouth and the baby is laughing. And a baby starts babbling, making his husky dog start howling every time.

And the Winners Are…

So it is time for tonight’s finalists. I have placed an asterisk next to tonight’s top three finalists!

Clown Face Flip-Out is the winner!

Did you catch last night’s America’s Funniest Home Videos Season 26 Episode 5? What was your favorite clip?