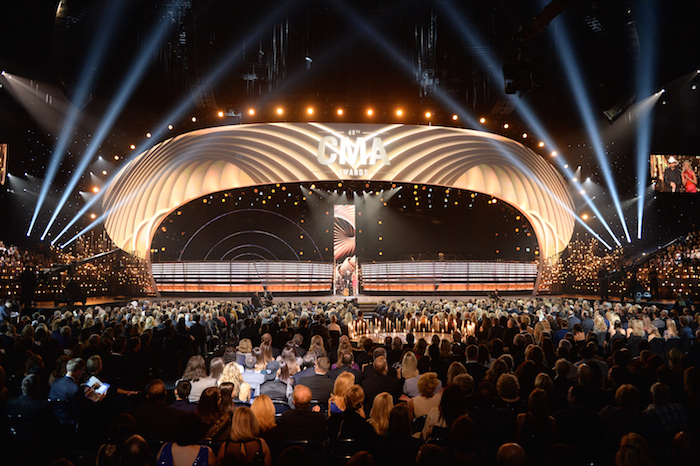 Before I get into my recap of the 49th Annual CMA awards show, I wanna ask what everyone else thought of the show? Is it just me or was the most of the performances awful tonight? And don’t even get me started on Brad and Carrie’s hosting duties tonight. And what about some of the winners? More specifically, who is Chris Stapleton and why did he win awards tonight that should have gone to someone else? I don’t know, maybe it is just me. Let me know your thoughts. I have added the list of nominees and the winners below the 49th Annual CMA awards recap!

So the opening of the show features Carrie Underwood and Brad Paisley in a Star Wars theme skit. She was Princess Carrie Fisher (get it??) and he was Hero Guitar Solo. We saw Darius Rucker as a Storm Trooper and Luke Bryan as Garth Vader. Weird! Not sure of the purpose of this!

The 49th annual CMA show’s opening act was Hank Williams Jr and Eric Church performing a cover of Neil Young’s song Are You Ready. I am not a fan of either of them but it was a decent performance.

Next up was John Mellencamp and Keith Urban, who performed Mellencamp’s song Ain’t That America. Mellencamp is aging, but he can still sing great.

Carrie Underwood and Brad Paisley are announced as the hosts. They start off with a duet that is a take on Willie Nelson’s Crazy, but they call it Cray Cray instead. They included the fact that McDonald’s does breakfast all day now and that Bruce Jenner is a babe now. I thought that their openings in previous years were so much better than this. There was no punchline like they usually have. Next, they talk about couples who split this year like Ben Affleck and Jennifer Garner and Kermit the Frog and Miss Piggy. Brad says that on an unrelated note, he wants to say hi to Blake Shelton. I liked that and Blake just laughs it off. They talk about the positives like Kenny Chesney, Jason Aldean and Kelsea Ballerini.

Steve Martin and Eddie Brickell are the presenters for Single of the Year, which went to Little Big Town for Girl Crush. I love that song, and the award was well-deserved.

Brad and Carrie do a short skit about Little Jimmy Dickens, including a montage of videos featuring Dickens.

Zac Brown Band takes the stage to perform Beautiful Drug. I wasn’t impressed with this performance even though I like them. I thought it had rough vocal patches.

Kenny Chesney is next to take the stage with his son Save It For a Rainy Day. I liked this performance and loved the tiki hut that was displayed on the screen behind him.

Next up on stage was Sam Hunt, singing his hit song Take Your Time. Performance was lovely but didn’t like the outfit he was wearing, donning a priest-like collar along with black shirt over a white shirt.

Miss America Betty Cantrell and Darius Rucker took the stage to present the award for Song of the Year, which went to Little Big Town with Girl Crush. This award actually goes to the songwriters: Lori McKenna, Liz Rose and Hillary Lindsey.

Little Big Town takes the stage to perform Girl Crush, kind of ironic since that song just now won Song of the Year. As always, they played the song amazingly well. I loved how the four of them all matched with some sort of silver and black in their outfits.

Brett Eldredge and Cam are onstage to present the award for New Artist of the Year for the 49th CMA award show, which went to Chris Stapleton. Now I am a huge country music fan and I have never heard of him. I am disappointed that he won over Sam Hunt and Thomas Rhett. Not to mention radio doesn’t even play Stapleton’s songs.

Beautiful Carrie Underwood takes the stage singing her new hit song Smoke Break. I love this video but I am not really crazy about this song live.

Chris Stapleton and Justin Timberlake perform onstage. I know that many people liked this song and this performance but I just wasn’t feeling it. Stapleton begins with his song Tennessee Whiskey, with wife Morgan singing on background vocals and Justin coming in on the second verse. The two then sing Timberlake’s song Drink You Away.

Florida Georgia Line is up performing their new single Confession. I am a huge, huge fan of FGL but what the heck was that they were singing? Very disappointed.

Cole Swindell and two women from the U.S. Women’s Soccer Team were presenters of Duo of the Year award, which went to Florida Georgia Line. Well- deserved of course.

Eric Church takes the stage for his performance of Mr. Misunderstood. He has a surprise album out today. This song is typical Eric Church, a song with country-rock roots.

Keifer Sutherland and Lee Ann Womack presented the award for Album of the Year to Chris Stapleton’s Traveller. Again, what? How did he win against greats like Jason Aldean and Little Big Town? Am I missing something here?

Brad Paisley performs his song Country Nation. I think his voice got lost in the instruments. I did like the mascots on the bleachers behind him. Cute!

Blake Shelton is onstage singing his new song, Gonna. WOW! I think this is the first performance of the night I really liked, I mean really, really liked. Great song Blake!

Maddie and Tae take the stage for their song Girl in a Country Song. Again not impressed.

Luke Bryan takes the stage to sing his hit song, Strip It Down. I love this song, and I love Luke, but he sounds a bit flat in some spots.

Miranda Lambert (love her) is onstage performing Bathroom Sink. This is not Miranda at all. She looks tired and emotional and run-down. This is a great song and one she wrote herself.

My man Jason Aldean takes the stage to perform Gonna Know We Were Here. Again, love him but wasn’t impressed with the performance. He sounded like he couldn’t keep up with the song and the instruments were louder than he was singing.

Kacey Musgraves was on stage with her song Dime Store Cowgirl. I like this song, and I like her. She writes most of her songs herself.

Dierks Bentley is up with his song Riser, accompanied talented violinist Lindsey Stirling. I love Dierks and I love this song of his. Lindsey has so much talent on the violin.

Charles Kelley from Lady Antebellum and Hannah Davis, a model presented the award for Female Vocalist of the Year, which went to Miranda Lambert. Miranda said during her acceptance speech that she needed a bright spot this year.

Next onstage is Reba McIntire with Brooks and Dunn with a medley of Why Haven’t I Heard From You and Play Something Country. It was a fun and energetic performance.

Jennifer Nettles and Erika Christenson presented the award for Male Vocalist of the Year. Can we guess who won this award? Yes, Chris Stapleton. I just don’t get it.

The final award of the night, Entertainer of the Year, was presented by Reba McIntire. The award went to Luke Bryan. Awesome! This is the second year he wins this award.

And that is a wrap for the 49th CMA awards.

Here are the nominees and winners for the 49th annual CMA Awards:

Entertainer of the Year OF THE 49th annual CMA awards

Luke Bryan (My prediction for the winner) – WINNER!

Female Vocalist of the Year the 49th annual CMA awards

Carrie Underwood (My prediction for winner)

Luke Bryan (My prediction for winner)

Vocal Group of the Year the 49th annual CMA awards

Rascal Flatts (My prediction for winner)

Florida Georgia Line (My prediction for the winner) – WINNER!

New Artist of the Year the 49th annual CMA awards

Thomas Rhett (My prediction for winner)

Album of the Year the 49th annual CMA awards

Single of the Year the 49th annual CMA awards

I Don’t Dance- Lee Brice (My prediction for winner)

Song of the Year the 49th annual CMA awards

Like A Cowboy- written by Randy Houser and Brice Long

Like A Wrecking Ball- written by Eric Church and Casey Beathard

Musical Event of the Year the 49th annual CMA awards

Music Video of the Year

Something in the Water- Carrie Underwood

Did you watch the 49th Annual CMA Awards yesterday? Do you have anything else to add to this recap? Did you enjoy it or was it a disappointment?