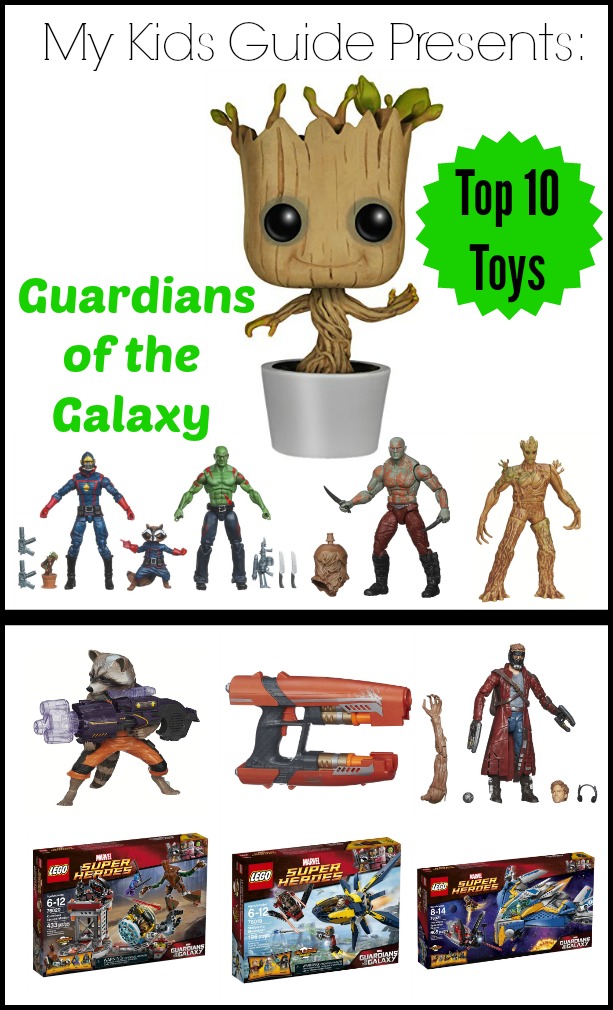 Getting ready for Christmas already? Check out our favorite Guardians of the Galaxy toys! Marvel Studios and Walt Disney Studios Motion Pictures recently released the The Guardians of the Galaxy. The main character, Peter, is abducted as a young child by Space Pirates. After escaping with a powerful infinity stone, he is pursued by Ronan, leader of the space pirates. Throughout the film he teams up with mismatched groups of people. The group must prevent the infinity stone from being used by Ronan to destroy entire planets.

Why your kids love Guardians: The Guardians of the Galaxy is comprised of characters that kids of all ages and interest can connect with. They have a genetically generated raccoon, a humanoid that looks like a walking tree, Drax the Destroyer is superhuman,and Gamora a skilled female assassin. There is a character favorite for everyone!

Guardians of the Galaxy Toys for Kids

This post contains affiliate links. Thank you for the support.

Launch into battle against the Sakaaran’s Necrocraft in the awesome Starblaster and help Star-Lord to escape with the orb! Place the Nova officer in the cockpit and launch into the sky. Fold back the wings for high-speed pursuit mode and then flip them up to activate arrest mode. Use the space blasters and boot thrusters of Star-Lord to outwit the enemy and protect the priceless orb! Includes 3 minifigures with assorted weapons and accessories: Star-Lord, the Sakaaran and a Nova officer.

This 6-inch Star-Lord figure looks just like Peter Quill and he’s ready for battle with a weapon in each hand. But he also comes with the left arm part you need to build the plant-humanoid warrior Groot! Collect all 6 parts (other figures sold separately) and complete the hero’s body! Then send your Star-Lord and other figures (sold separately) into battle at his side. The action is epic when you build your own Groot figure!

This 6-inch Drax figure is ready for battle with a dagger in each hand. He also comes with the lower torso part you need to build the plant-humanoid warrior Groot! The action is epic when you build your own Groot figure! Marvel products are produced by Hasbro under license from Marvel Characters B.V.

He’s an accomplished pilot, experienced marksman, and a skilled hand-to-hand combatant. And a raccoon. You have a problem with that? Don’t let his furry demeanor fool you. Big Blastin’ Rocket Raccoon has no problem making his presence known with his light-up spinning blaster! Press the blaster’s top for various weapon sounds and to change the light color or reload when Rocket commands it. Then use the fire button to blast the bad guys! Hold it down for continuous blasting! Big Blastin’ Rocket Raccoon recoils and shakes with the motion of the blaster, stabilizing himself with his tail and a whole lot of attitude.

Groot brushes foes aside with a sweeping branch bash. This walking force of nature is a mystery apart from one undeniable fact: he is Groot. The Guardians of the Galaxy are on a mission to save the cosmos and your Groot figure is ready to take on the enemy with his branch bash! When you squeeze this humanoid figure’s legs, he actually grows taller! The enemies of the cosmos won’t be able to handle the assault of your hardcore Groot figure! Marvel products are produced by Hasbro under license from Marvel Characters B.V.

Prepare for an epic clash between the Guardians of the Galaxy and the ultimate villain, Ronan! Ronan zooms into this epic deep-space battle in his personal Necrocraft, backed up by the Sakaaran and holding his all-powerful Cosmi-Rod ready to strike. Luckily, Star-Lord is prepared to launch a counter-attack with the equally potent Hadron Enforcer and 2 iconic space blasters. Steer the mighty Milano Spaceship into battle with Gamora and Drax, firing the stud shooters and flick missiles to repel this evil threat to the Galaxy. Includes 5 minifigures with assorted weapons and accessories: Star-Lord, Gamora, Drax, Ronan and the Sakaaran.

Create your own epic Marvel adventures with this amazing Guardians of the Galaxy set. Build the ultimate collection of Marvel Legends. There’s an entire universe of heroes waiting to be explored. Marvel characters and stories have become a timeless part of pop culture, making their mark in comic books, in movie theaters, and on TV. Join the battle and continue the story that has entertained, captivated and inspired generations of fans around the world.

Team up with Groot and Rocket Raccoon to plot an escape from Knowhere! They’ve discovered the rare orb in the mining fields, only to be ambushed by the bad guys. Evade shots from the huge bazooka assembled by the Sakaaran and the evil Nebula and return fire with Rocket Raccoon’s custom space blaster. Leap into action with the gigantic posable Groot to confront the sword-wielding Nebula. Launch a fierce counter-attack so Rocket Raccoon can get away in the mining pod with the precious orb in its grabbing claw! Includes 3 minifigures with assorted weapons: Rocket Raccoon, Nebula and the Sakaaran, plus Groot figure.

Which of these Guardians of the Galaxy toys for kids is your favorite?