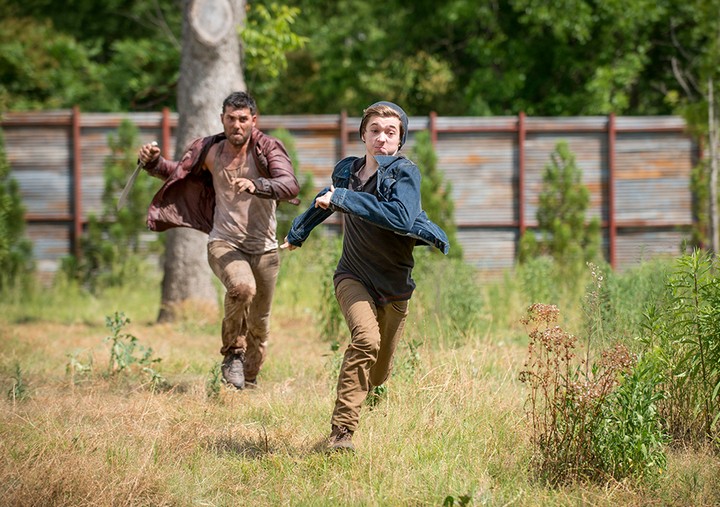 Last week, it was all about Rick and his gang but not this week. This week it is all about Carol and the rest of the gang from Alexandria. Since she arrived in Alexandria, Carol has played the role of the sweet woman who loves to mother others. But that all changes tonight when Carol transforms into a gun-happy woman.

It seems that the Wolves have arrived in Alexandria, and they are killing people in town left and right. We learn that there are the ones who sounded the horn from the end of last week’s episode. Carol is not about to let these Wolves take over the town. She arms her friends with guns and they all go on a killing spree of these Wolves. We also saw some more of Morgan in tonight’s episode. He doesn’t want to kill anyone and he even manages to convince some of the Wolves to leave town before they get themselves killed. Here is my question, though: How in the world did Morgan get back to town so fast, compared to Rick and the others? I don’t know but it seems a bit odd to me.

Okay, so for those who don’t remember who the Wolves are. Remember last season, when Rick and his gang tried to lead Noah back to his town, Shirewilt Estates? When they got there, they discovered the town was invaded upon and everyone was murdered. The Wolves were responsible for these killings, evident by the mutilated bodies with the letter W carved in their foreheads.

Carol and Morgan are not the only ones in town though. Maggie is there, taking care of Deanna, Rosita is there, Aaron is there and Carl is there, protecting his sister Judith. Jessie is also there as is Ron.

We also learned more about Enid tonight and her arrival in town. She would mark all the spots she went to, prior to Alexandria, with “JSS,” which is also the name of tonight’s episode. Enid’s parents were consumed by zombies. By the end of the episode, Enid has left town after Carl finds a note she left behind, reading “Just Survive Somehow,” which we assume is the long version of her signature “JSS.”

Tonight, we are introduced to the doctor in town, Denise. She has a bit of anxiety but Eugene works with her to build up her confidence. I thought it was nice to see Eugene have a bit more of a role in The Walking Dead.

Tonight, however, was mainly focused on Carol. It was funny how toward the end of tonight’s episode, Carl hears a kitchen timer go off, meaning that Carol’s casserole was ready. Carol is certainly her old self once again and this is not a bad thing, considering there are still thousands of zombies on their way to Alexandria.

Eventually, Carol and the others chase the Wolves out of town, well the ones that they didn’t kill. The survivors are left to deal with the aftermath of what just happened in their town.

Did you catch The Walking Dead- Season 6- Episode 2? What were your favorite moments from the episode?