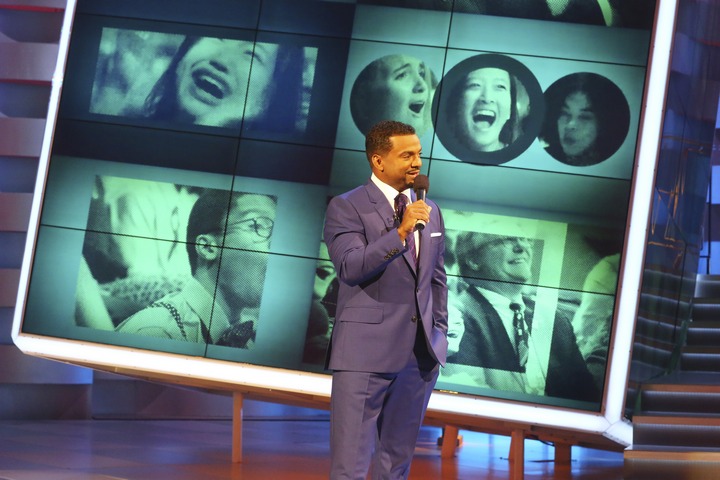 Tonight’s episode on America’s Funniest Home Videos features brand new funny and hilarious videos. I have added asterisks to the clips to keep an eye out for as winners. This episode if heating up with meltdowns, screams, and lots of laughs. Check out our recap for all the best clips.

Kids are at a birthday party. One girl is blindfolded, with a stick in her hand and is being spun around to hit the piñata. When she stops spinning, she hits the girl who was spinning her around with the stick.

A pair of dogs want to play fetch with a Halloween creature. The dogs are dressed up in people clothing and sitting outside on a chair. One of the dogs puts the ball on the creature’s lap and whines because he is upset the creature isn’t playing with him.

Grandpa is blowing bubbles with his gum while his grandson is sitting on his lap trying to pop the bubble. Instead, he smacks grandpa in the nose.

A band is practicing on the field, but it looks like someone forgot to tell the groundskeeper that practice was running late because suddenly the water sprinklers turn on. The funny thing is that the tuba player just keeps on playing.

**A mom is doing her exercise routine in just her bra and underwear in the living room and is oblivious to the fact that her son is catching her every move on his webcam.

It is time to play a game, which is always one of the best parts of the episode! Tonight’s game is Pick the Real Video. Alfonso will describe three videos that sound ridiculous, but one of them is real. Playing tonight is a married couple: Chad and Kara Take it away Alfonso!

Round 1- Pick The Real Video

Kara guesses #2, Chad guesses #3 and the correct answer is #2, so this one goes to Kara.

Round 2- Pick The Real Video

Chad guesses #1, Kara guesses #3 and the correct answer is #3, so Kara gets this one too.

Round 3- Pick The Real Video

Chad guesses #2, Kara guesses #3 and the correct answer is #2, so this one goes to Chad.

Both players win an AFV t-shirt. Way to go Kara for getting two out fo three right!

Two small dogs are patiently waiting for a dog treat. One of the dogs is so tired that he falls over while waiting.

*Dad comes into the house saying he just walked through a spider web and he is screaming. Mom and daughter scream when they hear dad scream. Daughter tells her dad that he screams like a little girl.

Five bears are rummaging through the trash in a backyard. A man runs out and yells at the bears, trying to scare them off. The mama bear begins to charge at the man, but he is able to run safely into the house.

***A little boy and his sister are in the kitchen crying. It seems that mom hide the Halloween candy in the oven but forgot it was there. So, she turns the oven on to cook dinner and all the candy melts.

The winner is Arachnophobia Dad!!!!!!!

That winning video is hilarious! The Web cam dance video was pretty funny, I really wasn’t sure who was going to be the winner, it was a close call tonight. I can not wait to see who wins America’s Funniest Home Videos next week for my week round of laughs.

So what was your favorite clip last night on Americas Funniest Home Videos: Season 26 Episode 12?