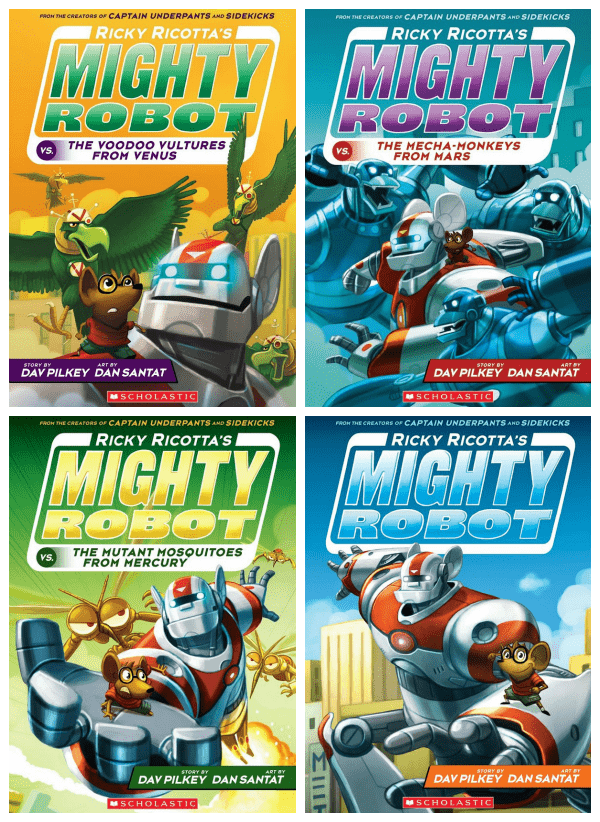 Do your children love the Ricky Ricotta books for kids? They’re going to be super excited to hear that the series got a brand new, full-color makeover! I received the first four books in the series to check out for this Ricky Ricotta review. My son is a HUGE fan of Dav Pilkey, so he was thrilled to see one of his favorite series come to life in vivid color. If you’re thinking “who is Dav Pilkey?” I have two words for you” Captain Underpants! He’s the genius behind one of the most popular series of books for kids, especially for middle-grade boys! He is, of course, also the genius behind the Ricky Ricotta books for kids! 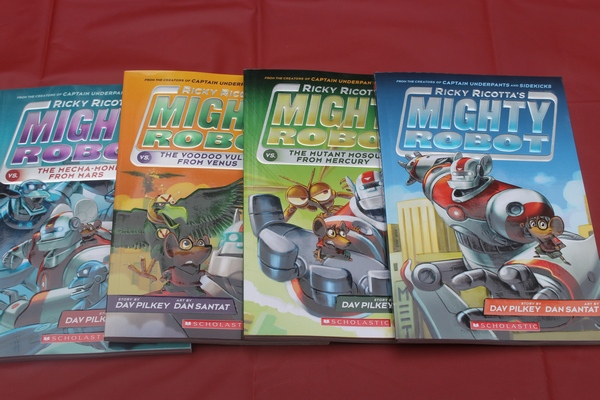 Let me tell you,when they say “full color,” they mean it! Just one glance at the covers tells you that they went all out bringing the characters to life. It’s not just the covers that impress, either. Take a look at one of the pages from the series, it gives you an idea of what to expect on every page: 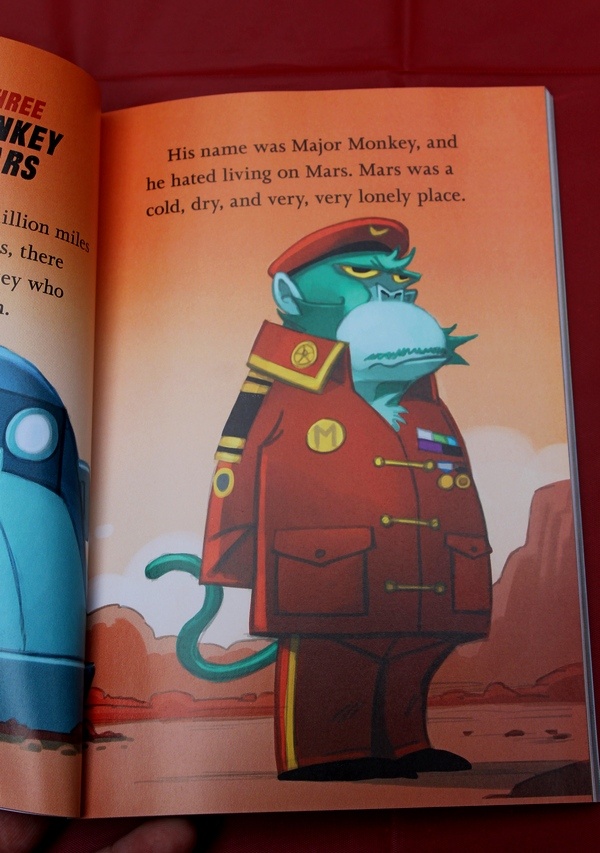 Who is Ricky Ricotta? Well, he’s an itty bitty mouse with some GIANT-sized problems! See, Ricky gets picked on by bullies every single day of his life. One day, something major happens in Squeakyville: a massive flying robot lands! Ricky and the Mighty Robot end up becoming best friends. Together, they fight bad guys to prevent the planet from getting overrun!

There are a few key points about the Ricky Ricotta series that I, as a parent, adore. First, you know that over at our sister site, OurFamilyWorld, we are very passionate about preventing bullying, so I completely empathize with Ricky. It’s hard being a little mouse in a big world, just like it’s often hard for kids to be little in a grown-up world. Second, the unlikely friendship between a tiny mouse and a giant robot shows kids that you can often find comrades in the strangest places. It’s a lesson in diversity and acceptance. Third- and perhaps most important- the series is just plain fun, so it really encourages your kids to read.

One other thing that I adore about Dav Pilkey books in general: he NEVER talks down to kids. Jacob has learned some great new “big words” from reading his books. If he doesn’t understand it, he asks me. Even when Jake was a baby, I never used “baby talk” with him. I wanted him to have a stellar vocabulary. At 3, my son had a speech delay and couldn’t talk much, but his receptive language (what he could understand) was off the charts for his age.

I feel like Dav Pilkey is a partner in helping expand my son’s language skills. The fact that he can do in in books about principals in underpants and tiny mice with giant robot friends makes him all the more impressive. The Ricky Ricotta books for kids really are FOR KIDS. Take a closer look at the synopses from each book, plus check out this cool video! 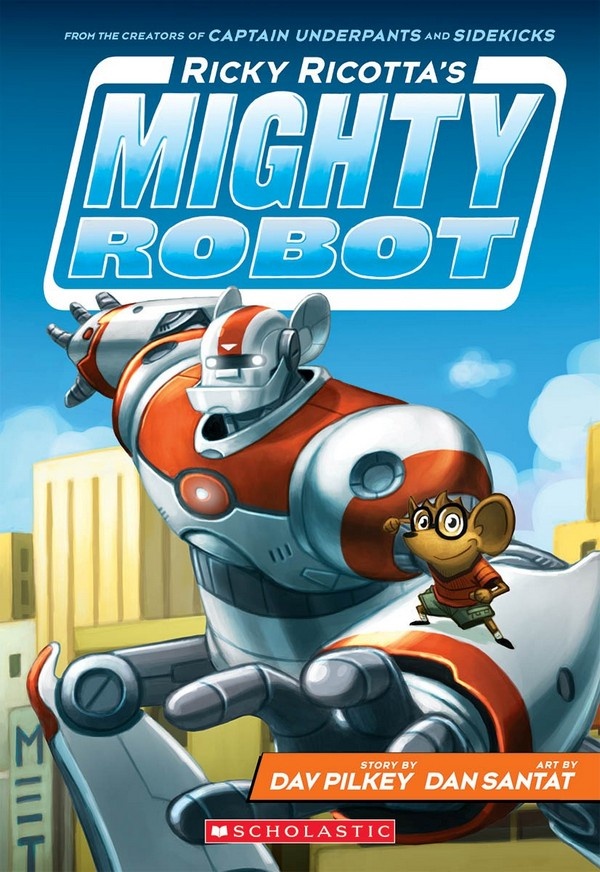 Little Ricky Ricotta has a problem: the bullies at school pick on him all the time. Until one day, he saves the life of a mighty robot. Together, Ricky and his Robot face the bullies, and save Squeakyville from a giant evil lizard monster. That’s what friends are for! 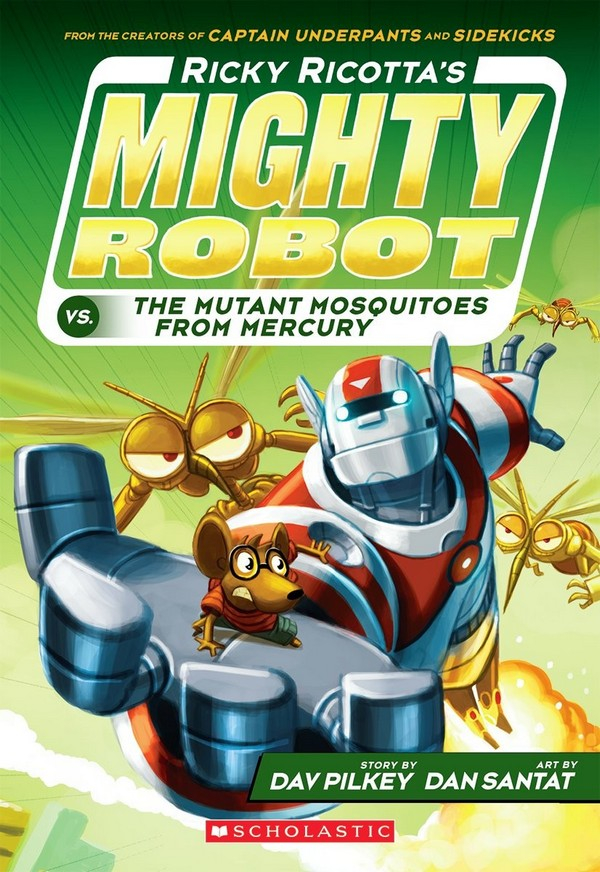 Mr. Mosquito hates Mercury. The days are so hot, they melt his flip-flops, and the nights are so cold, his toothpaste freezes solid! He’s decided to take over Earth instead. Ricky and his Robot must stop his army of massive Mutant Mosquitoes! 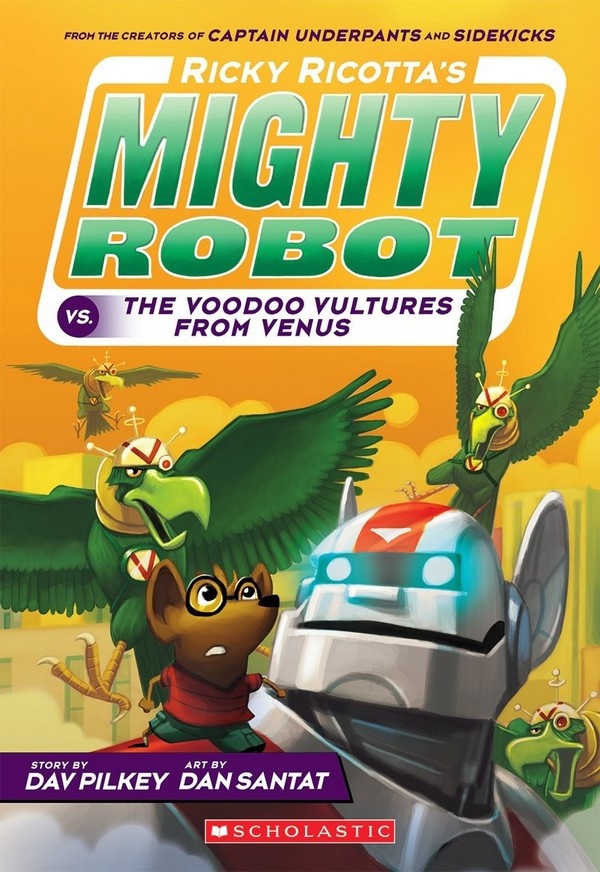 Victor Von Vulture hates Venus. His toasted cheese sandwiches are always way too gooey, and ice cream melts in a second! So he and his army of Voodoo Vultures try to cast a spell on the Earth. It’s up to Ricky and his Robot to stop them! 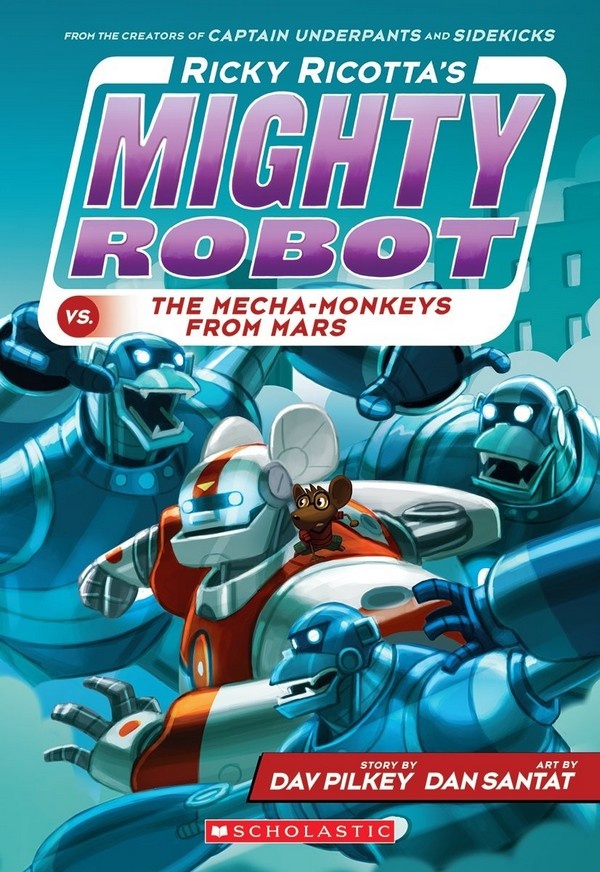 ABOUT BOOK FOUR: RICKY RICOTTA’S MIGHTY ROBOT VS THE MECHA-MONKEYS FROM MARS

Little Ricky Ricotta has a problem: the bullies at school pick on him all the time. Until one day, he saves the life of a mighty robot. Together, Ricky and his Robot face the bullies, and save Squeakyville from a giant evil lizard monster. That’s what friends are for!

Get your copies of the Ricky Ricotta series today! Just click on each picture in the collage to go to the order page on Scholastic. Affiliate links included in the collage:

Want a chance to win all four of the new, full-color Ricky Ricotta books for kids plus an awesome telescope? Giveaway includes:

Enter below on the Rafflecopter form! Giveaway is open to US residents age 18+ and ends on September 24th.   a Rafflecopter giveaway
Prizing & samples courtesy of Scholastic