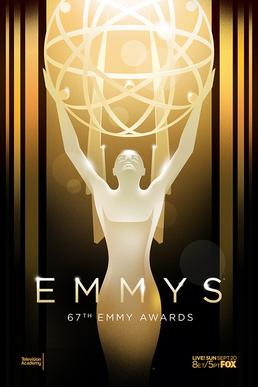 “The 67th Annual Primetime Emmy Awards Poster” by Source (WP:NFCC#4). Licensed under Fair use via Wikipedia.

The 67th Annual Primetime Emmy Awards took place at the Microsoft Theater in Los Angeles. It was hosted by Andy Samberg, who I think did the worst job of hosting ever. The show starts out with Andy sitting at the table with well-known actors and actresses asking him if he watched such and such a show. It ended with him breaking out in song about there being too many shows.

Then the jokes started, or I should say lame jokes. Here are just a few of his failures of the night. “Is it me or does Bernie Sanders always look like his flight was delayed?” “I gotta say I’m sure Donald Trump seems racist…what else?” “Racism is over. Don’t fact check that.” Really? Ugh, new host for next year please.

There were some memorable highlights of the show as well as memorable winners.

Let’s start with the winners.

Here are my thoughts on the winners.

I didn’t expect Game of Thrones to win anything since this was this worst season to date. I agree with Veep winning for comedy series but think House of Cards should have won for drama series. The Voice is one of the best reality shows of all time so I was glad it won. I also don’t agree with either of the winning lead actors. For lead actor in a comedy, it should have gone to Anthony Anderson on Black-ish and lead actor in a drama definitely should have gone to Kevin Spacey for House of Cards. As for the supporting actor and actresses, definitely Uzo Aduba deserved her win as did Tony Hale for his win. However, I think the supporting comedy actress should have been Mayim Bialik on The Big Bang Theory and supporting drama actor should have gone to Jonathan Banks from Better Call Saul.

The show was not without surprises including the presenter for the last award of the night, Tracy Morgan. He received a standing ovation when he came out on stage. He was humble in thanking everyone for their love and support. He also proved he hasn’t lost a single part of his humor when he said, “When I finally regained consciousness I was ecstatic to learn that…I wasn’t the one who messed up.”

I do have some opinions of the night. First of all, does John Stamos ever age? He is 52 and doesn’t look a day over 35. Again, I was glad The Voice won their award but I was surprised to see Carson Daly on stage to accept the award. I had no idea he was even part of that show. Apparently, he is one of the executive producers. Hmmm…who knew? Fred Savage from The Wonder Years was a presenter tonight. I have to say I had a moment of feeling old when I discovered he is now 39 years old and was only 12 when he started doing The Wonder Years.