The Walking Dead: Glenn is alive BUT #TheWalkingDead 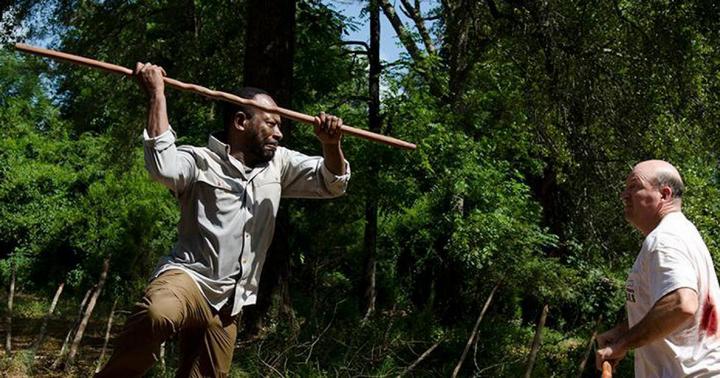 So, you are probably wondering whether or not we find out Glenn’s fate this week (during The Walking Dead Season 6 Episode 7) since the show has kept us in limbo for the past few weeks. Well, the good news is yes we did find out and yes Glenn is still alive. I knew it all along while somewhere saying that he wasn’t alive. He is too important of a character to kill off. So it turns out that Glenn did use Nicholas as a shield when he fell on him. Then, Glenn was able to get under the dumpster to hide. It turns out that the walkers were distracted by sounds of a can rolling on the ground and Glenn is able to escape from under the dumpster. While he is dehydrated, tired and bloody, the good thing is that he is alive. Enid shows up and gives him a bottle of water.

Let’s see what happens during The Walking Dead Season 6, Episode 7

So, apparently that answers the question as to where Enid disappeared to. Glenn suggests that she go back to Alexandria with him, but she says she never wants to go back there. When Glenn tries to make her go back with him, she pulls a gun on him.

Back in town, we get a look into what next week’s winter finale will entail. The church tower is falling apart because a truck had driven into it when the Wolves did their attack. However, no one seems to pay attention to the fact that this tower is going to come down and soon, even when they are constantly checking the walls.

Morgan is in Dr. Denise’s office, trying to score some antibiotics. And Deanna is suddenly happy and cheerful once again. Strange since she has been borderline crazy for the past couple weeks. If you ask me, she has lost touch with reality and has no clue what is going on around her.

While everyone is trying to figure out how to get the walkers away from the wall, Spencer thinks he has a plan. He tries to shimmy himself over the wall and onto another building. He thinks if he can find a car, he can distract the walkers away. However, things don’t go as planned when the rope doesn’t hold. Tara risks her life to save Spencer by shooting the walkers and holding onto him. Rick, Tobin and Morgan show up and get Spencer to safety. Rick is upset with Tara for risking her life for Spencer and she responds by flipping him off.

Rick and Carl are teaching Ron how to shoot. Not sure if this is a good idea since Ron is out for revenge and will stop at nothing to get it. Rick gives him an unloaded gun, which Ron quickly fills with bullets after stealing some from the armory. Later, we see Ron creeping up on Carl, gun in hand. It seems that even though he is seeking revenge on Rick for killing his father, he does so with Carl, the thing that Rick cherishes the most.

Glenn and Enid find the green balloons and fill them with helium as they make it back home. The problem is that there is a load of walkers standing between them and home. Glenn releases the balloons, which is a signal to those inside the walls that he is still alive. Maggie sees the balloons and is excited as can be.

The Walking Dead Season 6 Episode 7 ends with the church tower finally crumbling and crashes down over the wall, making a huge hole in the wall, not to mention a way for all those walkers to get into Alexandria.

Did you catch up on the Walking Dead Season 6 Episode 7 yesterday? Who do you think will survive the tower fall? Tell me.

5 thoughts on “The Walking Dead: Glenn is alive BUT #TheWalkingDead”