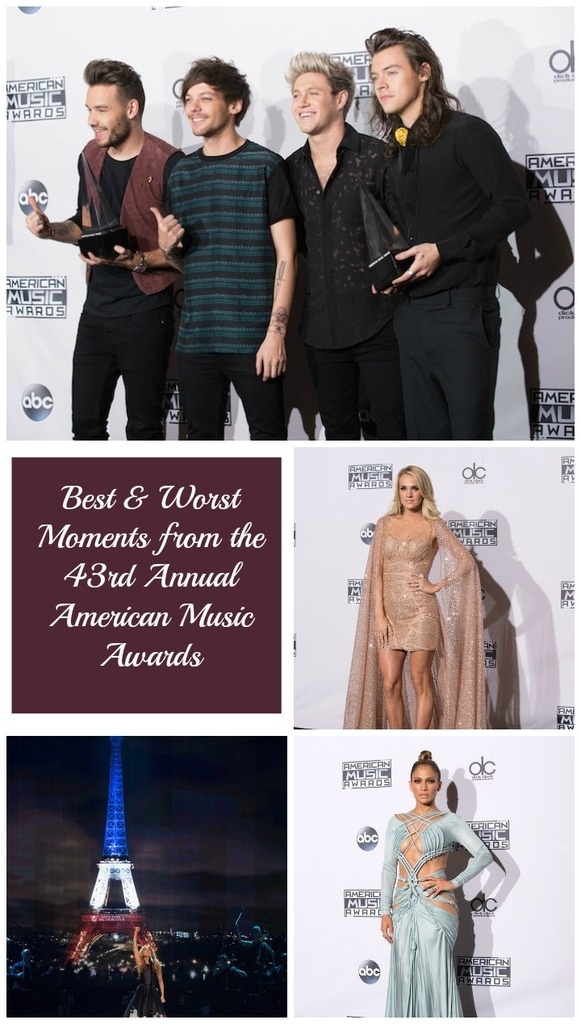 Yesterday, the 43rd Annual American Music Awards were held in Los Angeles. This year, we have Jennifer Lopez hosting the ceremony. She also is the one opening the show, staring off by singing her song, Waiting for Tonight and then sings a medley of hit songs from this year’s nominated songs. It was a good number, complete with an array of dancers. 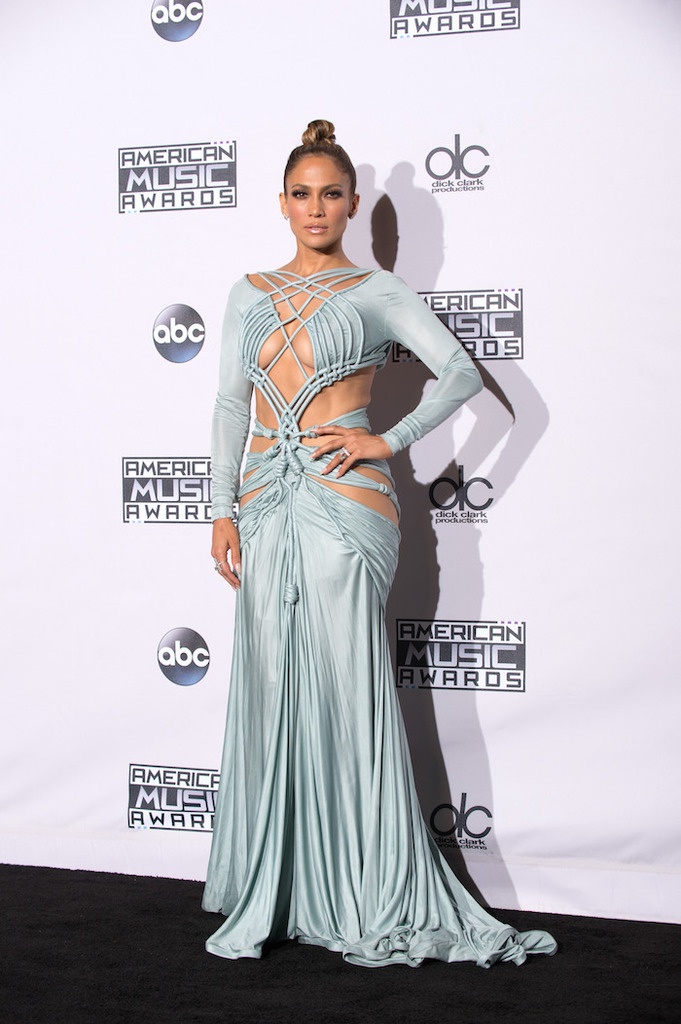 The first award of the night is presented by Prince. He is wearing sunglasses. Really? He does know that he is inside a building right? I always found him to be strange. The award is Best Soul/R&B Album, which does to The Weekend for the album Beauty Behind the Madness.

After Lopez talks about how she always had a dream of hosting the AMA’s, Hannah Davis and Wiz Khalifa introduce the performance of 5 Seconds of Summer, who perform Hey Everybody. While they are great performers, they certainly are no One Direction.

Next up to perform is Selena Gomez, singing her hit song Same Old Love. I love this song, I love her voice, I just love her. I loved the long staircase for props.

Nicki Minaj is next to present Best Pop/Rock Duo or Group. I love Nicki, while I get that many people don’t. She is a bit rough around the edges at time but she is genuine. I had no doubt that One Direction would win this and they did. This is their third year winning this award. 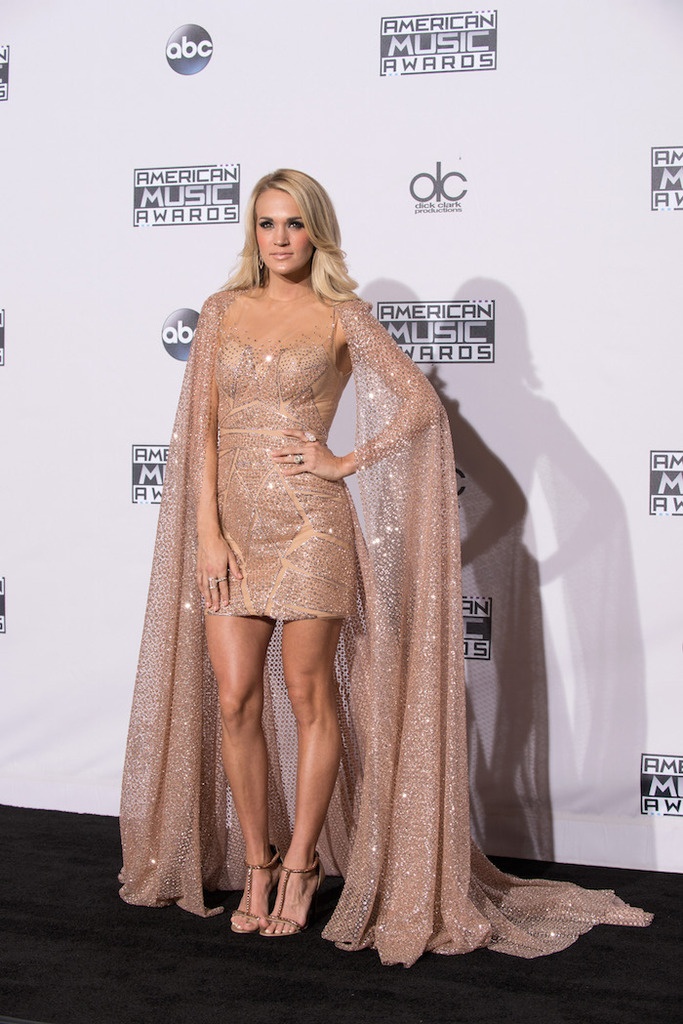 Demi Lovato performs her song Confident. She looks like a cross between a 40’s burlesque star and a Goth girl. Not sure if I like what she is wearing but she does have a gorgeous voice.

Chloe Grace Moretz and Nick Robinson introduce Meghan Trainor and Charlie Puth. Trainor takes the stage first to sing Like I’m Going to Lose You and then Puth appears to sing a duet with her, Marvin Gaye. When the song ends, the two share a long, long kiss. Are these two dating? I certainly hope they are and that she doesn’t just kiss everyone like this.

Kelsea Ballarini and Florida Georgia Line present the award for Favorite Country Male Artist. The award went to Luke Bryan. While I like Luke, I so think Jason Aldean should have gotten the award.

Ariana Grande takes the stage to perform her song Focus. Not a huge fan of hers but the song has a couple of high notes that she hits so well.

Tyrese Gibson (with his adorable daughter) and Wilmer Valderrama present the award for Top Soundtrack. The award was given to Pitch Perfect 2, which is fitting since it is a movie where they sing a lot.

Gigi Hadid and Kylie Jenner present the award for Favorite Rap/Hip-Hop Album. Okay, is there any show that doesn’t involve a Kardashian or a Jenner? They seem to be everywhere, on almost every show. Anywho, Nicki Minaj gets the award for PinkPrint. Well, no surprise there. I knew she would win over J. Cole and Drake.

Zendaya introduces One Direction, who perform their song Perfect. I love these guys. It is too bad they are taking a break. I just hope they are not splitting up for good. They have so much talent. 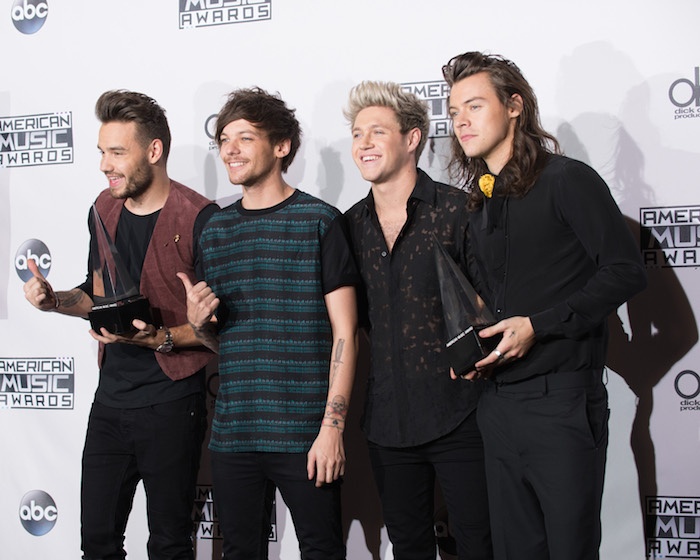 Alicia Silverstone and Jeremy Sisto introduce Gwen Stefani, singing Used to Love You. Thought we would see a shot of Blake Shelton in the audience but I don’t think he was there.

Okay I have to admit that the Jonas Brothers were my obsession, specifically Nick. Little Nick is all grown up now and singing solo. The band DNCE introduces him and he performs a medley of his songs including Chains, Levels and Jealous. It was a great performance until a gospel choir appears to sing Jealous. It was a bit odd I think.

Jennifer Lopez presents the award for New Artist of the Year to Sam Hunt. Wow! I am surprised a country star won this. Not that I am complaining since I am a huge fan of country music.

Hailee Steinfeld and Shawn Mendes introduce Walk the Moon, who perform Shut Up and Dance. Interesting song for a rather interesting group.

Fall Out Boy introduces Coldplay, who sing Adventure of a Lifetime. Yeah, this song is an adventure alright. Let me lay this out for you. The performance consisted of psychedelic stuff in the background, pastel balloons and confetti in the audience and dancing gorillas onstage. Yes, dancing gorillas. Well, they weren’t actual gorillas but still. Ok, we can move on from this performance anytime now.

Norman Reedus presents the award for Female Country Female Artist to Carrie Underwood. Again this was extremely predictable although I thought Miranda Lambert had a decent chance of winning too.

Ashley Benson and Tove Lo introduce The Weekend, who performs The Hills. I was surprised to see all the pyrotechnics here since I didn’t think the network would allow all of that. But, all in all it was a great performance.

Puff Daddy, Diddy, Sean Combs, whatever he calls himself today presents the award for Collaboration of the Year to Skrillex, Diplo and Justin Bieber for Where Are You Now. I have to say I have never heard the song before in my life. I was hoping that See You Again would win this but no such luck.

Little Big Town introduces Luke Bryan and Karen Fairchild who sing their duet, Home Alone Tonight. She has such a beautiful voice and combined with Bryan’s vocals, makes for an amazing performance.

Taylor Lautner and Terry Crews introduce Macklemore and Ryan Lewis, along with Leon Bridges performing the song Kevin. If you have never heard of this song, and many haven’t since it is fairly new, you need to listen to it. It is a powerful song about holding big pharmaceutical companies responsible for the deaths of prescription drug addicts. They totally have the best performance of the night in my opinion.

Fifth Harmony presents the award for Favorite Alternative Artist to Fall Out Boy. I have to admit that even though I like their music, I never knew they were alternative. I always considered them mainstream rock. Guess I learned something new.

Anna Kendrick introduces the duet featuring Alanis Morisette and Demi Lovato, singing Morisette’s hit song You Oughta Know. I liked this song decades ago when Alanis released it but adding Demi to the mix just wasn’t a smart move.

Ellie Goulding and Julianna Hough present the award for Favorite Rap/Hip-Hop Artist to Nicki Minaj. Again this is no surprise since there was no way that Drake or Fetty Wap were gonna win.

Jared Leto introduces Celine Dion, who gives an emotional performance tribute to those affected by the recent Paris attacks. The song was in French but I don’t think there was a dry eye in the house, or anywhere for that matter. 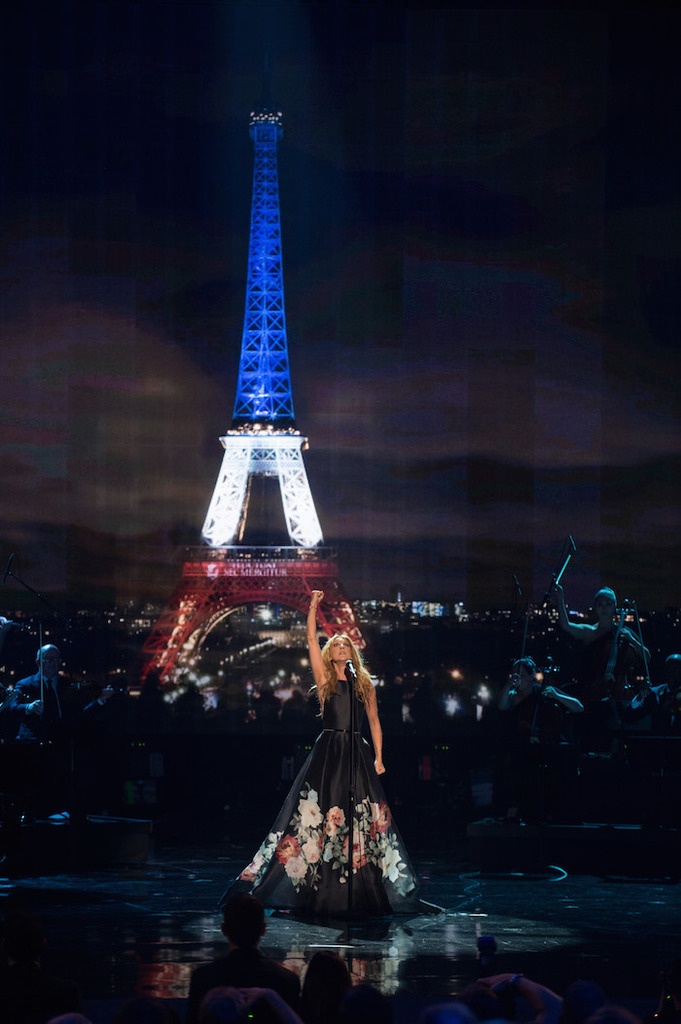 A new scene from the upcoming movie Star Wars: The Force Awakens is shown. Harrison Ford introduces Pentatonix, who performs the score from Star Wars. Wow, they are all in costume and are joined by an orchestra during the song. These guys can sing let me tell you.

Miss America, Betty Cantrell and Kevin O’Leary present the award for Favorite Soul/R&B Male Artist to The Weekend. His second win of the night.

Jeremy Renner presents the last award of the night for Artist of the Year to One Direction. This is their second year winning this award. So predictable though.

Ciara introduces the final performance of the night, Justin Bieber. He starts off performing What Do You Mean with an acoustic guitar. Kind of slow and boring. Justin really isn’t an acoustic type person. However, he then performs Where Are You which is much better. However, he was dressed in torn jeans and a hoodie. He does know this is an award show right?

Here is a recap of all the winners, along with the award given off-air!

NEW ARTIST OF THE YEAR PRESENTED BY KOHL’S

SONG OF THE YEAR

COLLABORATION OF THE YEAR UN-LEASHED BY T-MOBILE