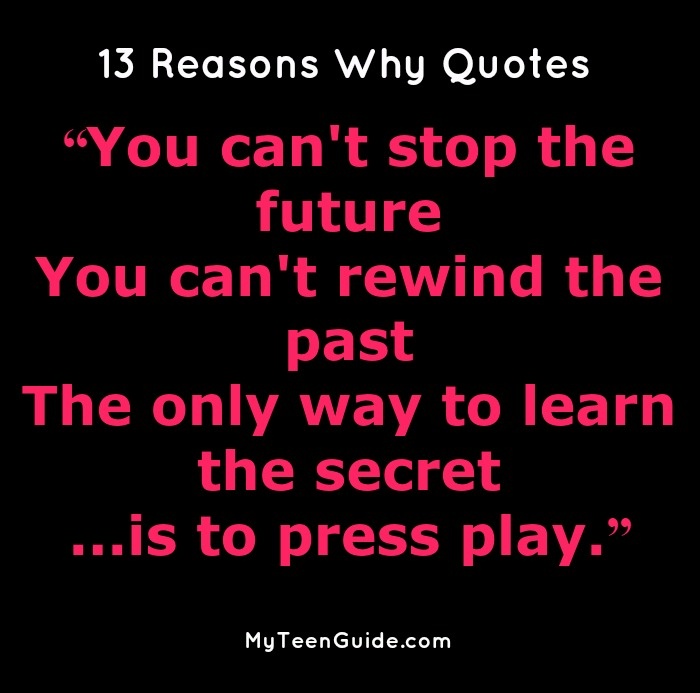 Looking for the best 13 Reasons Why quotes? I’ve got you covered. Like most of you, I binge-watched the Netflix Original over the course of just a few nights. Three nights, actually. For those of you doing the math, I dedicated probably around 4.25 hours a night to watching the show until it reached its incredibly distressing and depressing conclusion. No spoiler here, you already know what is going to happen to Hannah. She kills herself. That’s not really the surprise. What she leaves behind, and the mystery of WHY she did it: that’s what you find out throughout the 13 cassette tapes.

13 Reasons Why Quotes You Need to Read

We use words like “need to read” a lot. In the case of these 13 Reasons Why quotes, though, you actually DO need to read them. I think everyone needs to read them because they mean something. They’re not just witty bits of dialogue or catchphrases that look good on a meme. They are thought-provoking and emotional. The series itself has mixed reviews, but these quotes definitely get you thinking about the way we treat each other. Read on to see what I mean. I am including quotes from the book, as well, because in some cases, author Jay Asher just plain said it better. 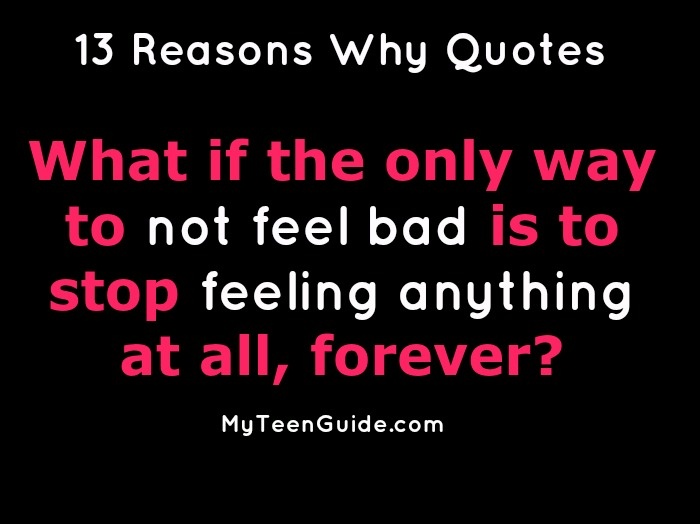 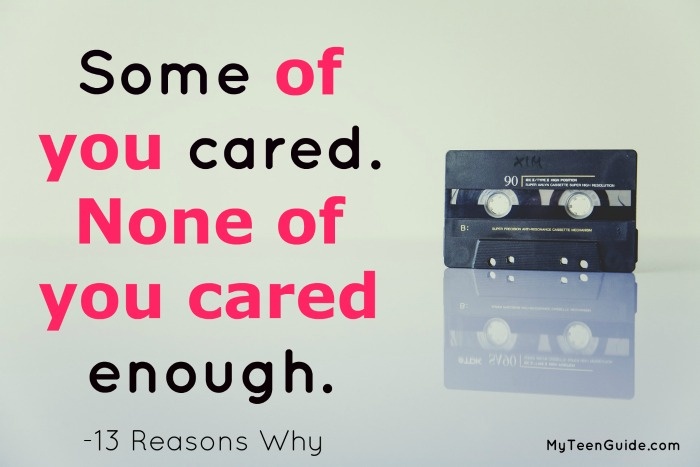 “Some of you cared. None of you cared enough.” The sad thing about this statement, there were at least two people who really DID care enough…her parents. 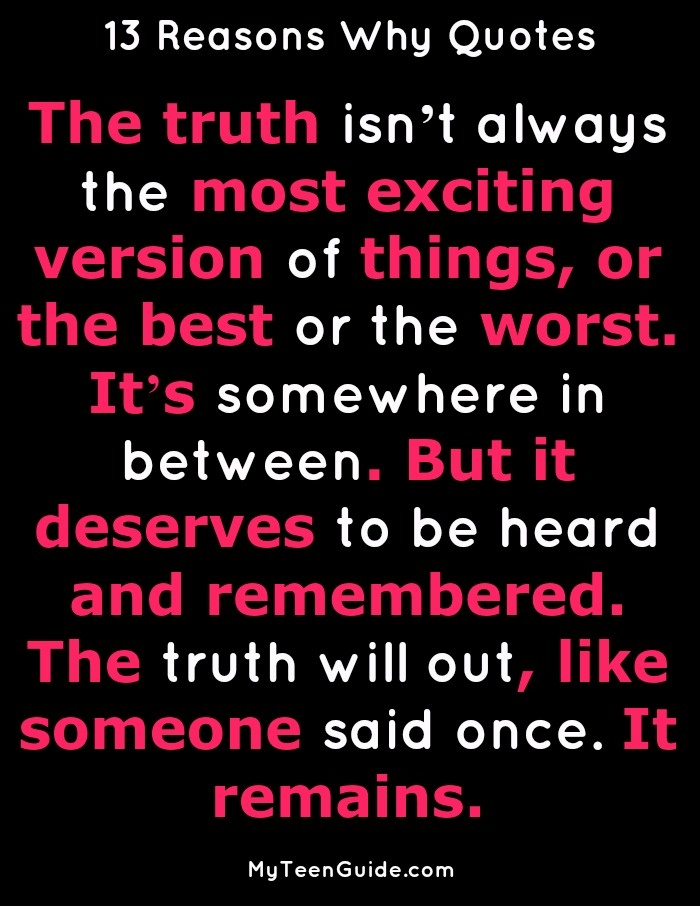 “The truth isn’t always the most exciting version of things, or the best or the worst. It’s somewhere in between. But it deserves to be heard and remembered. The truth will out, like someone said once. It remains.”

“You can’t stop the future
You can’t rewind the past
The only way to learn the secret
…is to press play.” 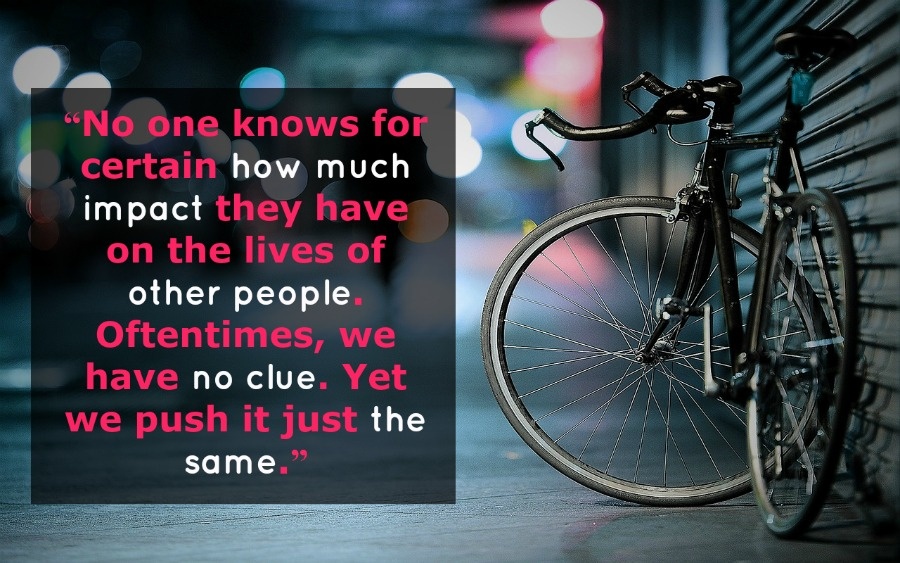 “No one knows for certain how much impact they have on the lives of other people. Oftentimes, we have no clue. Yet we push it just the same.”

“When you try rescuing someone and discover they can’t be reached, why would you ever throw that back in their face?” 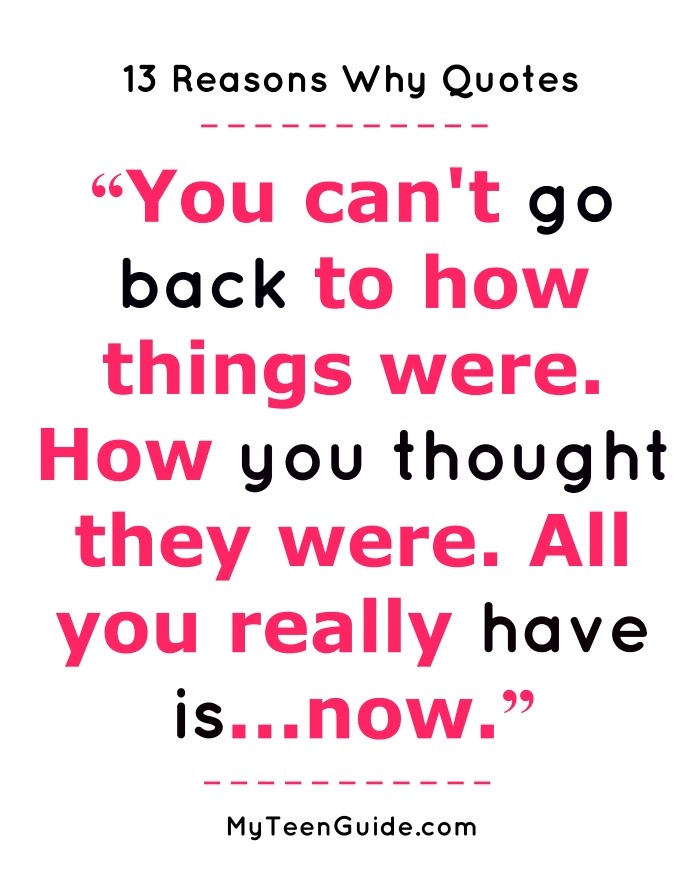 “You can’t go back to how things were. How you thought they were. All you really have is…now.”

“I hope you’re ready, because I’m about to tell you the story of my life. More specifically, why my life ended. And if you’re listening to these tapes, you’re one of the reasons why.” 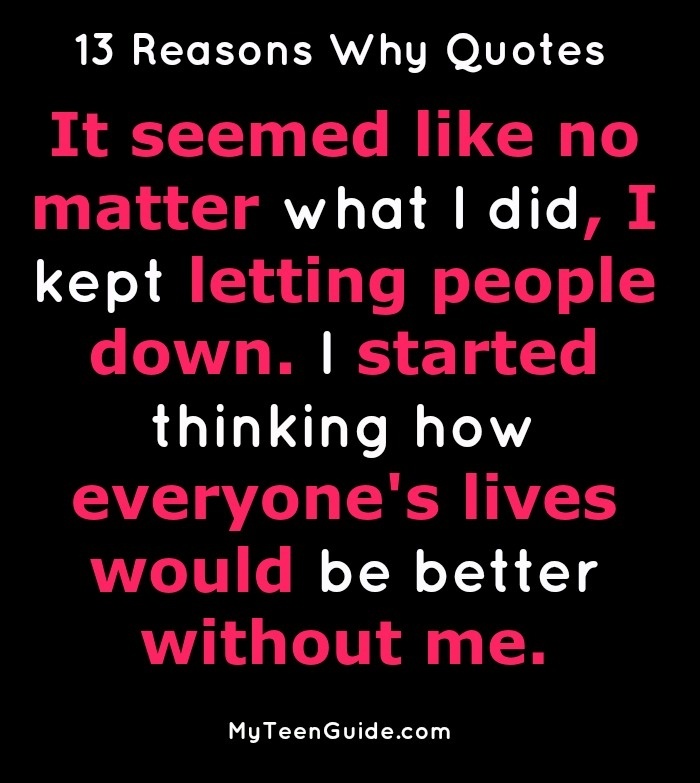 “It seemed like no matter what I did, I kept letting people down. I started thinking how everyone’s lives would be better without me.”

“A flood of emotions rushes into me. Pain and anger. Sadness and pity. But most surprising of all, hope.”

“You can hear rumors. But you can’t know them.” – This is so incredibly true. A rumor is just that, someone’s idea of what happened. No one knows the truth except the people who were actually involved.

“But sometimes there’s nothing left to do but move on.”

Do you have any favorite 13 Reasons Why quotes that I missed? Share below!