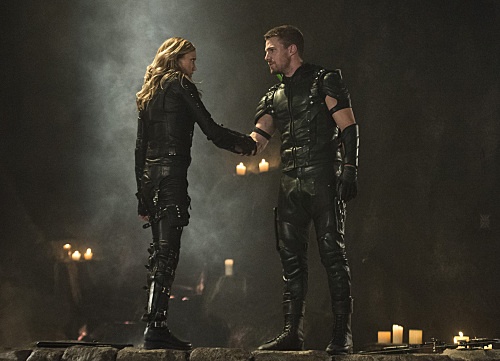 Busy last night? We’ve got your Arrow Season 4 Episode 5 recap right here to get you all caught up! “Haunted” was another terrific episode! It seems like the CW is really pulling out all the stops this season! Remember, which each episode, we’re getting closer to finding out who was in that grave at the end of the season premiere!

Check out this great clip from inside Haunted:

If you recall last week, the last thing we saw was that Sara was missing. This episode opens with two criminals targeting a woman in a back alley, where Sara ends up swooping in to save the day. Here we see the first indication that she might remember who she is as her fighting skills are up to par as usual and she’s doing the right thing, which suggests she might not be all bad. Although you initially think she is doing good, she then immediately turns and attacks the woman she was protecting and starts yelling in a different language, speaking in tongues if you will. She takes off when the police show up, but there is a lot left open in this scene for thought!

We get to see more of a glimpse into Oliver’s political career in this episode when he has hired a political strategist. The strategist recommends he distance himself from Laurel because she is a reminder of his past in regards to his image, and a rich party boy likely wouldn’t win over the hearts of the city.

Again, we see a scene this week with Felicity and Kurtis working together. Felicity tells Kurtis that she has listened to the recording of Ray but that something sounds off about it. She suggests there is another layer to the recording that she can’t hear and Kurtis agrees to clean it up for her so they can listen to the full recording.

Detective Lance meets again with Damien who hands him a small electronic device that he asks him to plug into a computer in a federal facility. Because of the hold Damien has on him, he doesn’t really have a choice, so he realizes he will likely have to reach out to The Arrow Crew for help.

Meanwhile, The Arrow Crew is hunting down a blonde woman who is killing people all over the city. Finally, Felicity locates her and The Arrow Crew deploys to the area. Laurel is also searching for who she knows is Sara to keep her away from her father, Detective Lance, but ultimately Oliver spots her and realizes who she is.

Detective Lance reaches out to The Arrow Crew for help because of what Damien handed him to plug in to a federal facility. Felicity discovers it’s a virus created to delete certain pieces of data, though they aren’t sure which. Detective Lance and Diggle make a trip to the facility together so they can figure out what Damien’s plan is.

Felicity tells oliver about the recording from Ray and talks about grief and reliving it. Oliver says that he misses all the people in his life that he has lost, but that was is going on with Sara is much different because she isn’t healing anyone’s pain, but instead killing people. During their chat, they realize that there is a pattern to the women she is going after — and they all look like Thea! I think ultimately they will “put her down” as Damien suggested because she is so far gone and now she is a threat to Thea’s safety. Oliver calls Thea where his call is ignored and Sara ends up breaking into Thea’s apartment! (PSA: Always answer your phone, am I right?) There is a huge fight scene (probably one of the most epic of the season so far) and Thea ultimately ends up tricking Sara and getting away. 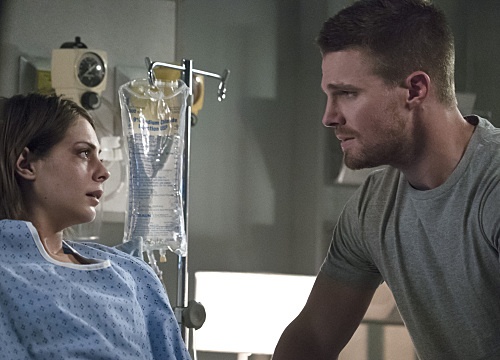 Flash to Thea being in the hospital and extremely sore where she mentions that she is going through the same thing as Sara because of The Pit. Laurel and Oliver have a chat in the hallway about The Pit and what it’s done to their sisters. Laurel feels hurt and like she isn’t treated equally because Oliver always keeps secrets from her for such long periods of time. Because he didn’t tell her about what was happening to Thea, she made the decision to also take Sara to The Pit not knowing that it would do this much damage. I really feel for Laurel because it just seems like she can never catch a break. She’s VERY emotional in episodes as of late and some may find that annoying, but my heart breaks for her! I might be biased because Black Canary is one of my favorite characters ever, but my opinion still stands!

In an earlier discussion between Oliver and Felicity, he mentions that there are forces in the world that can’t be explained but many people are too scared to believe in. In this, we know he is speaking of the Lazarus Pit, but are unsure what else he is talking about. In an island flashback, we learn that he witnessed “magic” on the island as well. A man who has showed up on the island finds a manhole in the ground that leads down into the darkness.

Thea reveals that Sara can be made whole again by killing who killed her. Laurel says if killing Thea is the only way to cure Sara, it’s no cure at all. Later, Sara goes into Thea’s hospital room, starts speaking in tongues again and begins to choke her. Meanwhile, Laurel is standing outside the room talking to Oliver. When they go in the room to find Thea being choked, Oliver looks Sara in the eyes and realizes her soul is not there.

Detective Lance pays a visit to Damien and makes it known that he knows the names being erased from the database were all military, including Diggle’s brother. He asks why Sgt. Diggle was killed and Damien discusses the political nature of the decision and that it involved drugs. This is the first real glimpse we have into any reason for his death.

Thea agrees to be bait to attract Sara who seems to have a connection with her so she is able to sense her and find her. The Arrow Crew is on standby and quickly takes her down thanks to Oliver and his tranquilizer arrow. Laurel said she needed to be killed, that she had no soul, but Oliver replied with “let’s get it back”. I don’t think he’s intending on letting her kill Thea to gain her soul back, so my hope is that he has another route. He contacts the man we saw on the island who showed him magic on the island and requests a fulfillment of a favor that he owes him – I’m assuming this man has a way to get Sara back and that’s pretty awesome!

The next scene shows the man in the Arrow Lair and he talks about a ceremony they can perform to restore her soul. The whole crew is there, including Detective Lance. He says he is going to transport himself and two others to another realm, and Oliver and Laurel volunteer. They lock hands and the man says that whatever has locked her soul away is not going to give it back without a fight. 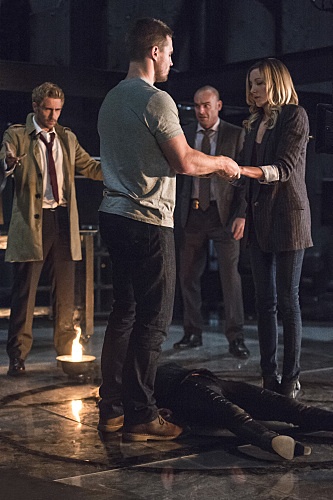 They get transported and find Sara but she is heavily guarded and stuck in The Pit. Oliver and Laurel work to get her out while the man who came with them fights the guards. They work to get Sara out and are able to get her successfully and are immediately transported back to their normal time. Sara wakes up and seems to be herself again! This is such a happy moment in the show and season for me because I have been rooting for her to come back! Before he leaves, the man warns Oliver the Damien is a force to be reckoned with and cautions him to leave town while he still can.

During another flashback to the island with this man and Oliver, he transfers a tattoo from himself to Oliver, noting that it is insurance against the leader of the soliders on the island who he warns him is not on the island just for narcotics like they say.

The episode wraps up with Oliver in office talking to his political strategist when Laurel shows up (like he recommended against). Oliver stands up for Laurel and says he won’t distance himself from friends like he originally said he would. Laurel and Oliver have a nice heart to heart about Sara and their friendship. Detective Lance shows up on Diggle’s doorstep saying he thinks he owes him something about his brother. It’s a classified file full of information about his brother and Detective Lance says reading it could change his perspective of his brother, so he cautions him against reading it.

Finally, Kurtis and Felicity meet up again and he has cracked the remaining pieces of the recording and cleaned them up so they could understand it. The episode closes JUST after Ray says “I need you to know, I’m alive and I need help.” I am practically jumping for joy at this point because I felt we had far too little time with Ray on the show! This puts the Olicity love in a weird spot, but certainly opens up the story quite a bit! What a gamechanger this episode was in so many ways. Sara has returned anew, Ray is alive, and Laurel and Oliver have renewed their friendship! Overall, this was a great episode that you don’t want to miss!

What did you think of this episode of Arrow? What about that shocking revelation at the end? Do you think it will affect Oliver and Felicity’s relationship? Tell us in the comments!