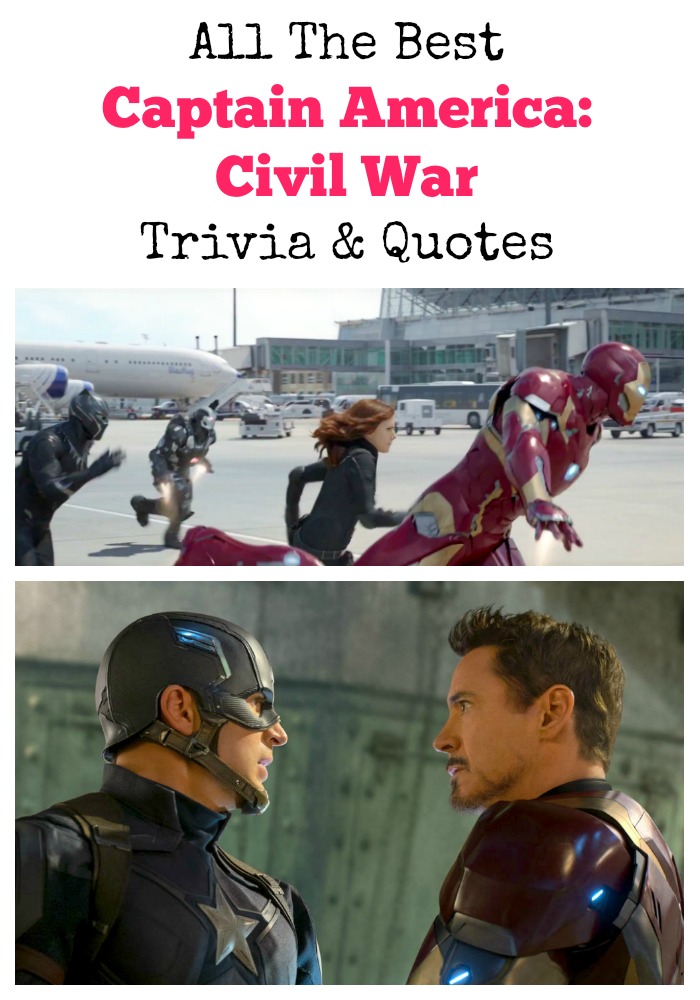 Every time I see an awesome movie to be excited about like Captain America Civil War, I always look for some trivia and quotes before I go. I’ll admit it when we’re sitting comfy in our seats watching the pre-show I like to be the smartie pants. I like to bring up little tidbits of info that Bae doesn’t know. I totally look like a badass bringing some of this up in casual conversation, and you can too! Check out all of the best Captain America Civil War trivia and quotes below!

All The Captain America: Civil War Trivia And Quotes You Need

So here are the deets about this movie. Captain America: Civil War is a superhero movie that is set to hit theaters on May 6, 2016. The movie will star Chris Evans as Captain America and Robert Downey Jr. as Iron Man. The cast will also include Scarlett Johansson, Sebastian Stan, Anthony Mackie, Don Cheadle, Jeremy Renner, Paul Rudd, Emily VanCamp and Paul Bettany. In this movie, an act that is designed to regulate superhuman activity, separates the Avengers into two opposite teams, one team led by Captain America and the other led by Iron Man. Here are some great Captain America: Civil War trivia and quotes.

Steve- “Sorry, Tony. You know I wouldn’t do this if I had any other choice. But he’s my friend.”

Natasha- “Are we still friends?”

Clint- “That depends on how hard you punch me.”

Sam- “I just want to be sure you’ve considered all our options. Because people who shoot at you, usually wind up shooting at me too.”

Steve- “I’m sorry, Tony. If I see a situation pointed south, I can’t ignore it. Sometimes I wish I could.”

Tony- “Sometimes I wanna punch you in your perfect teeth.

So lovelies, tell me which of the Captain America: Civil War Trivia And Quotes you liked best? Are you going to see this movie when it arrives in theaters?