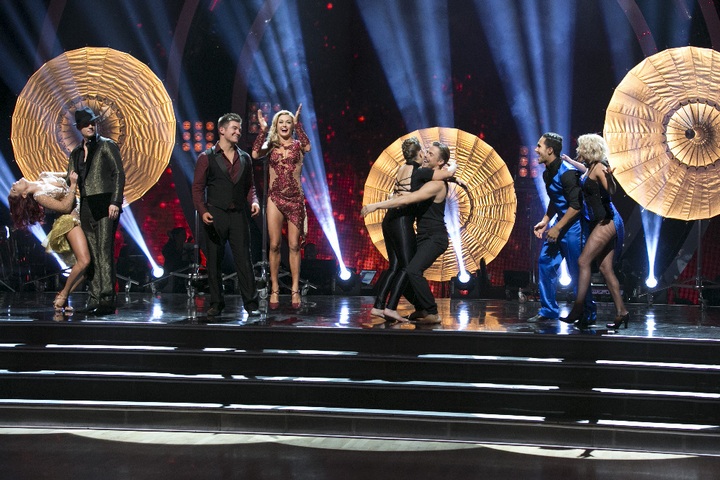 Miss last night’s Dancing with the Stars Season 21 Week 10 episode? Check out our recap to get all caught up on the greatest dances and latest scores! This is week 10 of DWTS and is also the semi-finals, meaning we will crown a winner next week. So, Tamar has been forced to withdraw from the competition. As you remember, she was hospitalized last week and arrived at the show just minutes before she was scheduled to dance.

After the show, Tamar went back to the hospital and it was discovered that she had blood clots in her lungs, forcing her to leave the competition. Because of Tamar’s exit, there likely won’t be an elimination tonight so the four remaining couples will go on to compete for the season champion next week. Next week, will be a two-night event, Monday and Tuesday. Tonight featured three rounds of dancing: individual dances, dance-off challenge (Alek competes against Carlos and Bindi competes against Nick) and trio dances (couples plus a professional dancer).

I love this dance. Bindi and Derek have such high energy here. She is doing an excellent job keeping up with him in this fast-paced dance.

Alek has improved so much since week 1. He has gone from someone who has never danced to a real contender in this competition. Lindsay did a great job with the choreography as it suits Alek well. The waltz is a simple yet elegant dance and Alek nailed this one perfectly.

This routine had the dance moves along with some accompanying performance value. Carlos did an excellent job expressing his emotions throughout the dance.

I really like Nick but unfortunately, this was not his best performance, and since this is the semi-finals, I expected him to give it his all, which he didn’t do. Sharna is seen giving him a pep talk halfway through the dance, since Nick seemed a bit lost. He made a couple of mistakes, which shouldn’t happen at this point in the competition.

Alek and Lindsay vs. Carlos and Witney- Cha Cha Cha

Alek and Lindsay are up first. While Alek didn’t make any mistakes on the routine, it was kind of the same old Alek stuff. Carlos and Witney did so much better. Carlos had some nice dance moves here.

Bindi and Derek vs Nick and Sharna- Samba

Bindi and Derek are up to bat first. Bindi looked like one of the professional dancers out there on the dance floor. Her steps were on-target, and her moves were impressive. Nick is up next, and he does really well too, but his routine didn’t seem to have the wow factor that Bindi’s did.

Bindi and Derek with Mark- Jazz

How can Bindi go wrong when she has two of the best professional dancers and choreographers with her? This dance was just beyond amazing. The three of them were totally in-sync together. Great performance by Bindi here.

Well, as if we didn’t know that Alek would choose his crush, Emma. I like this dance much better than Alek’s dance-off challenge. Lindsay and Emma did an amazing job with the choreography here too. Alek does some great kicks and nice lifts.

Carlos and Witney with Karina- Charleston

I am not a huge fan of Karina’s, never have been real. This is the first time any of them has performed the Charleston on the show. While the three of them did well together, Carlos stood out on his own here.

Nick and Sharna with Peta- Salsa

Wow, Nick really stepped up his game for this dance. I think that come next week, it will be a tough choice for the Mirror Ball Trophy between him and Bindi.

So, for the end of week 10, with three rounds of dancing and a maximum score of 63, here is what the judge’s leaderboard looks like:

What did you think of Dancing with the Stars Season 21 Week 10? Were you surprised by any of the scores? Tell us in the comments!