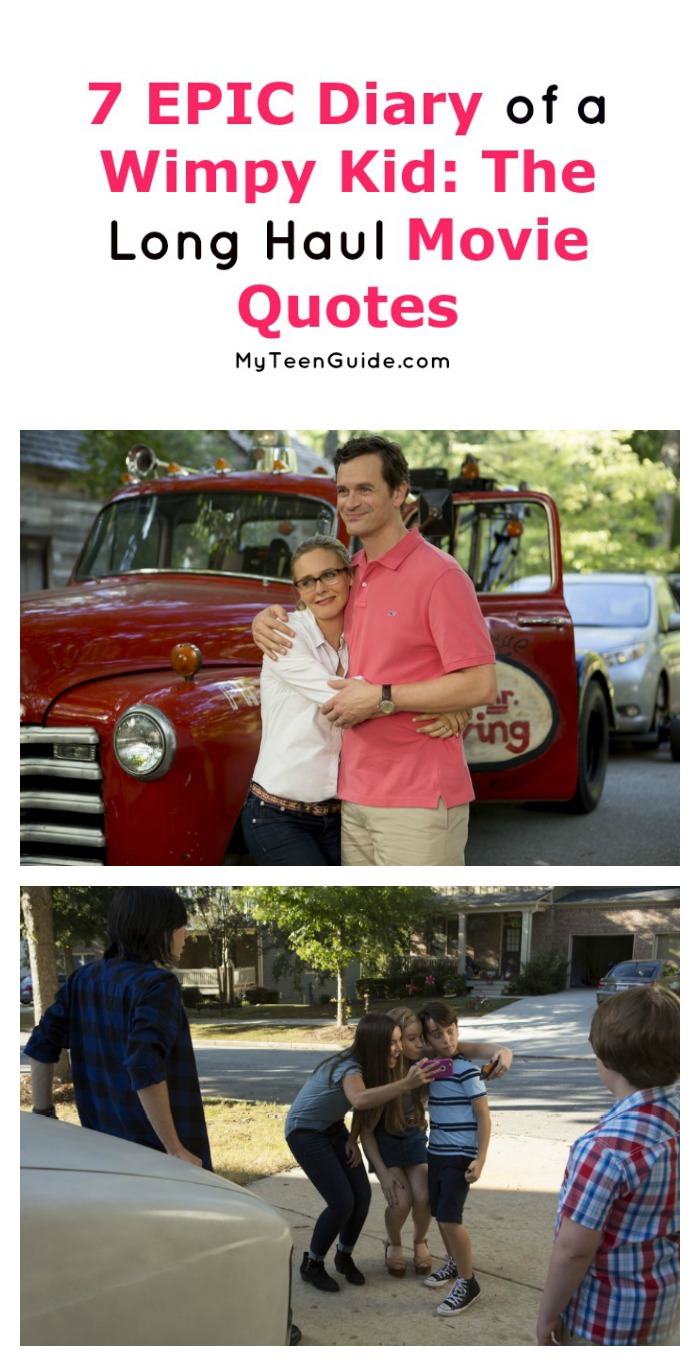 Some movie lines are just made for repeating, like these 7 Diary of a Wimpy Kid: The Long Haul Movie quotes! If you checked out our Wimpy Kid trivia post yesterday, you know that The Long Haul is an upcoming family road comedy movie that is set to hit theaters on May 19, 2017. It is based on the 2014 book of the same name by Jeff Kinney and is the sequel to the 2012 movie Diary of a Wimpy Kid: Dog Days. Here are some quotes from the upcoming movie as well as one quote from each of the past 3 movies in the series.

Diary of a Wimpy Kid: The Long Haul Movie Quotes

Voiceover, from the movie trailer:

Voiceover- “There are caped crusaders, galactic guardians and amazing web slingers. But for over a decade, only one hero dared to be wimpy. He is the wimpy kid.”

The voice of Greg Heffley, the wimpy kid, from the movie trailer:

Greg- “There’s one thing that I learned in my years of being a kid and that’s that you have zero control over your own life.”

Susan Heffley, talking to her family: Frank, Rodrick and Greg:

Voiceover, from the movie trailer:

The family is planning a road trip to visit grandma for her 90th birthday. However, Greg and Rodrick have other plans: attending a video game convention.

Quote from the 2010 Diary of a Wimpy Kid

Conversation between Greg Heffley and his best friend, Rowley Jefferson:

Greg- “I heard someone in the hallway saying that Bryce Anderson has a cute butt. What does that even mean?”

Quote from the 2011 Diary of a Wimpy Kid: Rodrick Rules

Conversation between Grandpa Heffley, Susan Heffley and Greg Heffley, as they are celebrating Grandpa’s birthday:

Grandpa- “Next year, I want a chocolate cake!”

Greg- “That is if you’re alive next year.”

Quote from the 2012 Diary of a Wimpy Kid: Dog Days

Conversation between Rowley and Greg, as they are about to take off on a carnival they think is scary:

Rowley- “In case we don’t make it, there’s something I have to tell you. One time I went to the bathroom and I didn’t wash my hands.”

Greg- “One time, I used your toothbrush to get dog poop off my shoe.”

Have you heard any other great Diary of a Wimpy Kid: The Long Haul movie quotes? Share them below!