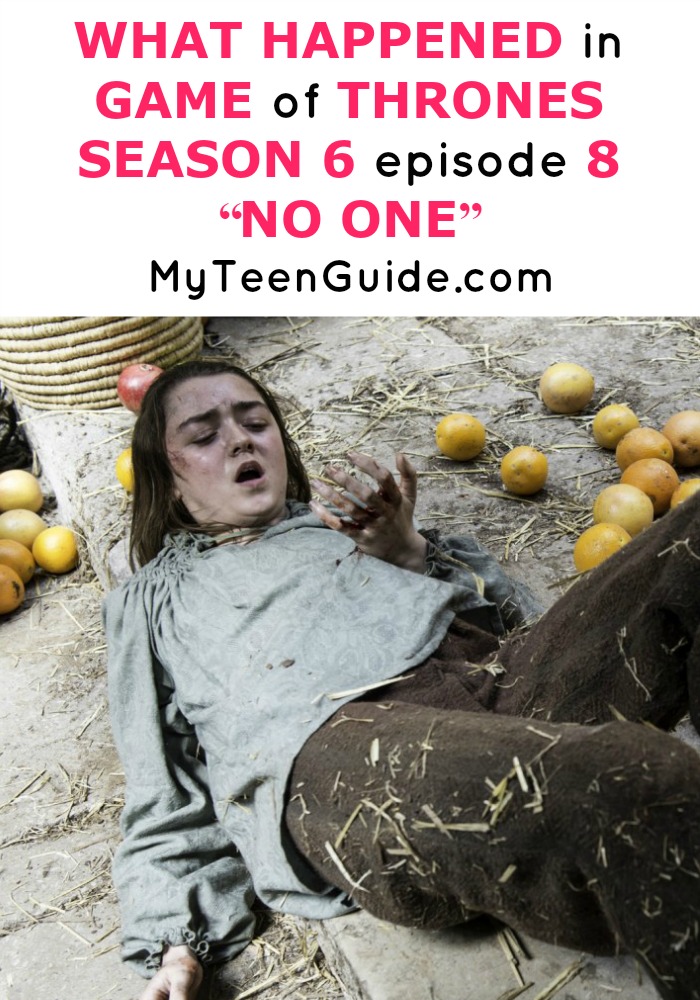 So what did happen in Game of Thrones Season 6 Episode 8? We saw a whole lot of Arya! While last week’s episode 7 was all about The Hound, most of the action this week happened with Arya’s character. There were some other rumblings happening in Meereen and the Riverlands. This episode felt like it was setting us up for more to come. Don’t worry, because the revelation we (finally!) saw with Arya is worth the watch. Plus there were more dragons which always make things amazing! Check out what happened in Game of Thrones  Season 6 Episode 8!

What Happened In Game of Thrones Season 6 Episode 8 Recap? “No One”

So we jump into things right away with Arya! The actress that was supposed to be killed by Arya ends up saving her. Arya appears backstage seriously wounded following the Waif stabbing her. She provides Arya with a place to sleep and treats her wounds. The actress is killed later on by the Waif, which I don’t think we would have anticiapted back in Episode 6.

Meereen appears more lively again as Tyrion and Varys discuss as Varys sets off to find friends in Westeros.

In the Riverlands, Brienne attempts to negotiate with the Blackfish but fails after he refuses to help Sansa and Jon retake Winterfell. As a result, Jamie discusses with Edmure, and it goes dark and threatening, Edmure as the lord of the castle is set free and gives the order to surrender the castle to the Lannisters. Blackfish is then killed refusing to surrender himself to the Lannisters.

Back in Meereen, the slavers are launching a massive attack against them. They disagree over how to handle the attack of the sea assault. While they are discussing, they hear a noise on the roof, and they all prepare for an attack. As they check it out, Daenerys emerges, and her dragon is seen flying off behind her.

She is amazing. I've just begun the first season and she is totally a badass, I can't wait for her to arrive at #kingslanding. #gameofthrones #got #kahleese #daenerys #daenerystargaryen #targaryen #dragon #hbo #emiliaclarke #kahldrogo #jonsnow #wolves #stark #ironthrone #sansastark #lannister #got1

The Hound tracks down the group of people who slaughtered his villager friends who he has been hiding out with for a considerable amount of time. He also regroups with some older acquaintances, including a person who he battled with a few seasons back and seemed convinced on rejoining with them.

The Waif chases Arya around Bravos until finally Arya enters her hiding place. The Waif enters and Arya draws her blade just before she uses it to very epicly cut the candle and then the screen goes dark.

#GoTGrids • ? In the A Song of Ice and Fire novels, Arya dubs a woman from the House of Black and White as "the waif" for her appearance. She appears to be a pale little girl with a gaunt bony face and dark eyes that look as big as saucers. The Waif was the only child of an ancient noble house, her father's heir. Her mother died when she was little and when she was six years old her father remarried. Her stepmother treated her well until she gave birth to a daughter of her own, then, she wanted The Waif to die, so her own daughter would inherit the Waif's father's wealth. The stepmother approached the House of Black and White, but could not bear the sacrifice asked of her. She then tried to poison the Waif and she also didn't succeed. When the healer in the House of the Red Hands told the Waif's father what the stepmother had done, her father offered a sacrifice of two thirds of his wealth and the Waif to the Many-Faced God for his wife to receive "the gift" of the god. His prayer was answered and the Waif came to the House of Black and White to serve. The poison, however, stunted her growth, causing her small and boney appearance. She only looks like a young child, but is actually 36 years old. In the TV series, the Waif technically breaks one of the Faceless Men's rules, not seeking personal kills, as she is shown to quite enjoy stabbing Arya and is pleased when Jaquen allows her to. #GameOfThronesSeason6 #GoTSeason6 For awesome ASOIAF and AWOIAF edits, don't forget to follow the amazing ? @asoiafedits @asoiafedits ⠀⠀⠀⠀⠀⠀⠀⠀⠀⠀⠀⠀⠀⠀⠀⠀⠀⠀⠀⠀⠀⠀⠀⠀⠀⠀⠀⠀ ATTENTION! ⚠ Please, give the credits in every pic if you want repost my grids! ❄? Tag your friends who love Game of Thrones and the world of Ice and Fire! ? DM me if you want to see an character here! #got #gameofthrones #gameofthronesfamily #gameofthroneshbo #hbo #asongoficeandfire #asoiaf #georgerrmartin #westeros #waif #thewaif #noone #facelessman #thehouseofblackandwhite #braavos #manyfacedgod #valarmorghulis #valardohaeris #fayemarsay

Following this, we see Jaqen following a trial of blood into the hall of faces. At the end of the trail, he can see the face of the Waif on the wall. Arya appears behind them, and after he tells her, she can finally be no one. She declares she has Arya Stark and is going home.

Let's appreciate the scene where this is from. Arya was able to defeat The Waif in the dark because when she was blind she trained with the Waif and because of this she knew how to fight her without seeing anything unlike Waif who hasn't had this training – – #aryastark #gameofthrones #follow #fandom #fangirl #epic #sad #thewaif #maisiewilliams #thewaif #faye #ashildr #doctorwho #noone #braavos #stark #direwolf #needle #blind

All the rumblings we saw this week look like they are breaking into full-on battle next week! Check out the preview for next week’s Game of Thrones Season 6 Episode 9!

So what did you think of Game of Thrones Season 6 Episode 8? Were you happy to see Arya victorious and embracing being “The One?” Tell us what you think in the comments!