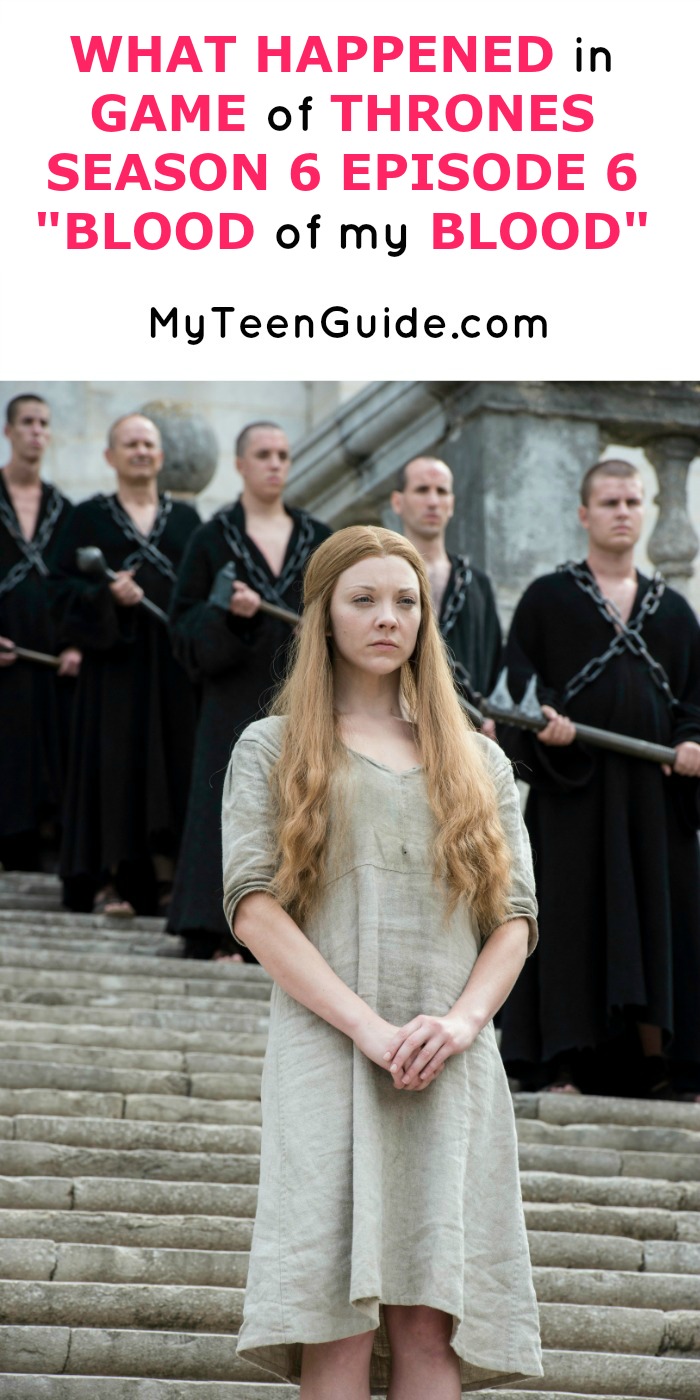 After last week’s intense episode, I’m ready to find out what happened in Game of Thrones Season 6 Episode 6. We’re so lucky this week as Game of Thrones has traditionally skipped making an episode on Memorial Day weekend, but this episode was intense enough they kept the regular schedule. So pop your popcorn and get ready an awful lot of revenge, some seriously intense atonement and a super uncomfortable in-law meet-up that makes most family dinners look positively pleasant. Spoilers are ahead my lovelies, as we see what happened in Game Of Thrones Season 6 Episode 6.

Bran continues within his visions from last week’s Game Of Thrones episode 5. This time, there appears to be a large series of events. Meera struggles to carry Bran without the support of our beloved Hodor. Bran wakes to tell Meera they’ve been found, and the Walkers appear quickly. Luckily before harm comes to them, unidentified riders appears with a flaming weapon to defend them. The rider takes Bran and Meera on his horse, and they ride away. It is revealed later on the episode the rider was sent by the three-eyed raven, who now lives again. The rider is also later identified as Benjen Stark (who we haven’t seen since season 1, so I’ll forgive you if you say wait who’s that again?). We see Benjen explain his story and warns of the future to come. Benjen is the last surviving member of the Stark family. His disappearance during season 1 at the wall, after convincing Jon Snow to leave his family, has been a long dangling plot line that we’re happy to see finally have some resolve especially after Jon Snow’s return this season.

Sam and Gilly are on their way to Sam’s parents. They discussed the “terms” of their arrival at his families place which is pretty fancy. Gilly appears very blown away by the welcoming presented, and that she has to lie and say Sam is the father of her child. Gilly is dressed up and later attends dinner with Sam and his family. Sam’s father disrespects Sam. When Gilly stands up to defend him and reveals, she is a wildling. In the end, his father lets them stay, excluding Sam. Sam instead decides to leave and steals his father’s sword.

Back in King’s Landing the high sparrow and the King discuss Margaery Tyrell’s upcoming walk, much like Cersei’s atonement walk at the end of the last season. The High Sparrow then allows King Tommen to see Margaery. Tommen seems shocked by the comments made by Margaery regarding the high Sparrow and his “view” on the world.

Arya is back watching a play and is intent on killing the actress with her. We see Arya poison the bottle that her target drinks from, but as Arya exits the lady stops her and talks to her. Just before she drinks from the poisoned bottle, Arya slaps the drink from her hand. Arya then reveals to the actress who sent her to kill her. The Waif witnesses everything thing and reports it. We then see the Waif permitted to find and kill Arya.

In King’s Landing it’s atonement time for Margaery, As the High Sparrow is making his remarks, the Tyrell army arrives with Jamie. Jamie demands that Margaery and her brother be released, but the High pSarrow refuses at first. After more direct threats, the High Sparrow gives in and claims Margaery already atoned. King Tommen emerges and announces an agreement between the Crown and the faith. In response, Tommen removes his uncle…erm.. father… from the King’s guard. Jamie takes the head of the Lannister army and is ordered to help take the Riverlands back.

Walder Frey demands his children take back the Riverlands despite the seemingly impossible odds against them.
With Daenerys and her Dothraki companions, the group continues heading to Meereen. Daenerys stops and discusses ships and strategy needed to take Westeros. She notices something up ahead and orders everyone to wait. It turns out to be her dragon which she rides and lands in front of the group. Daenerys then gives a stellar speech about going to war with Westeros, which they strongly seem to support.

Drogon is back. The troops are ready. Mereen is waiting. Conquer that and then it's a one way ticket to Westeros for Dany. Be scared, be very scared. Khaleesi is coming. #gameofthrones #bloodofmyblood #daenerysstormborn #motherofdragons #khaleesi #housetargaryen

Phew and that wraps up what happened in Game Of Thrones Season 6 Episode 6! they are setting us up big for the next episode as everyone is getting ready for war. Tell me your thoughts about this weeks episode in the comments!