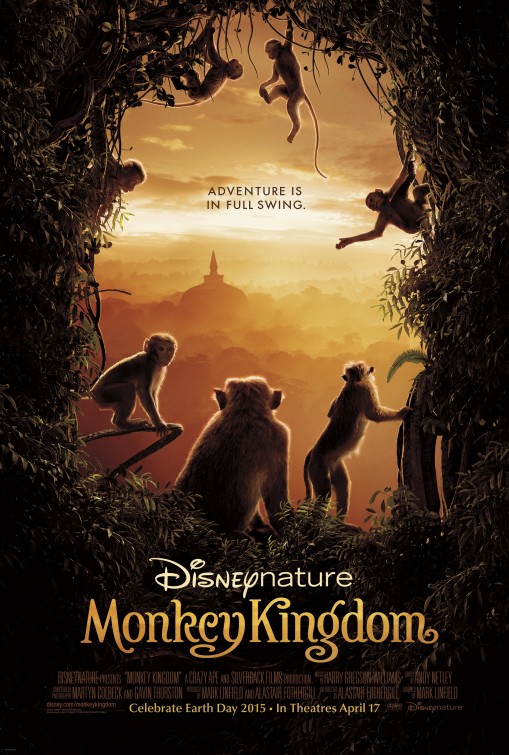 The new nature documentary from Disneynature will be released in April and it follows a family of monkeys. “Monkey Kingdom” introduces us to a number of macaque monkeys in Sri Lanka and we get to watch the daily lives of this adorable group of creatures. Let’s get to know the characters just a little so you’re ready and already in-the-know when “Monkey Kingdom” is released.

First, check out the trailer to see some of these adorable Monkey Kingdom characters in action! Then head over to Disneynature and check out their great resources for parents and educators, including an awesome downloadable worksheet kit! 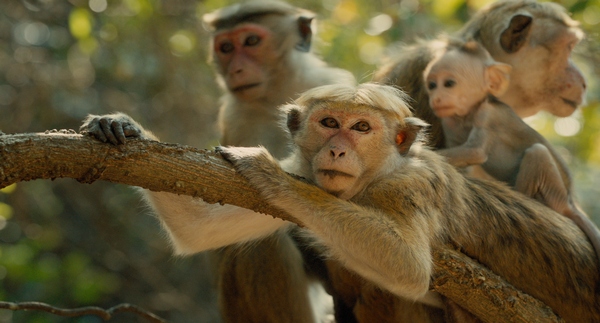 Maya is the main character in this tale of monkeys. She is a new mom and is part of the family of macaques that have set up housekeeping at Castle Rock. A new group of monkeys moves in and evicts Maya and her family, but Maya doesn’t them to decide upon her destiny. This determined mom shows courage and ingenuity as she teaches her young son about life.

Maya has distinctive looks, making her easy to identify among the other monkeys. She has a bob of blonde hair on the top of her head and three spots on her nose.

Kip is Maya’s baby and his curiosity is typical for a youngster. He is a quick learner and with Maya as his teacher, this playful little guy may just be the king over his own family of macaques someday.

Raja has the role of alpha male in our story. He is the head guy and knows it. Being alpha male doesn’t mean just sitting around while everyone else takes care of him, though. Raja is responsible for his monkey family and takes the job seriously by perching high in a fig tree to watch out for danger. He must protect his family and keep them safe.

The Sisterhood is a group of three female macaques who are the “managers” of the troop at Castle Rock. They make sure everything runs smoothly for the troop of monkeys and oversee the daily operations. These three ladies have red faces, making them easy to recognize amongst the other monkeys. They are a tight trio and are very loyal to each other, but don’t expect warm welcomes from them as they are not exactly friendly.

Kumar is the new guy. He arrives with intentions of joining the troop and he brings an intelligence that makes him stand out. He earns respect amongst the troop at Castle Rock and for Maya, he offers her a chance at new love.

Are you planning to watch “Monkey Kingdom” when it is released?