I am so excited to share these awesome Goosebumps 2: Haunted Halloween movie quotes & trivia!

I loved the first movie, and can’t wait to see this one in theaters on October 12th, just in time for Halloween!

If you love a mashup of horror, comedy, action and adventure all in a family-friendly package, this is definitely the movie to see.

Read on to find out everything you need to know about Goosebumps 2! 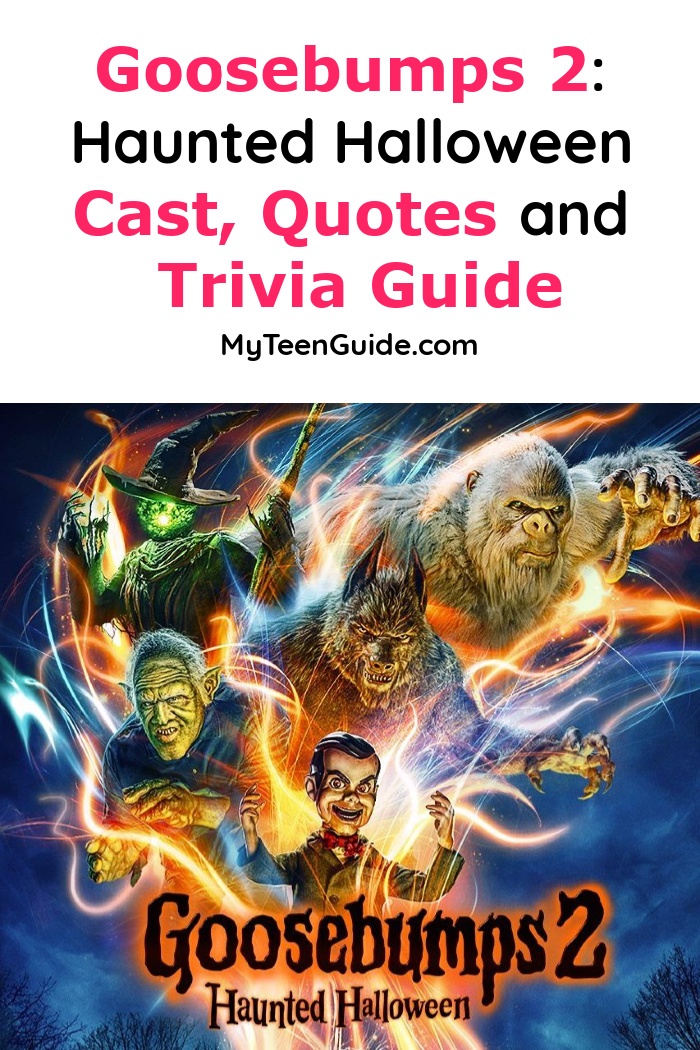 First, a few quick facts to catch you up, in case you haven’t heard of this movie yet.

Goosebumps 2: Haunted Halloween is set to hit movie theaters on October 12, 2018. Let’s check out the cast first, then we’ll get to some great movie quotes & trivia.

As I mentioned above, the Goosebumps 2 cast is completely different than the first movie. The most glaringly obvious omission is, of course, Jack Black as Stine. I’m super depressed about this because I really loved his character (and him as an actor overall).  Still, I think it’s going to be a great flick, even with a total cast shakeup!

(Besides the movie quotes, I also added some text that appears in the movie trailer, so you can get a better idea of the movie).

Text that appears in the opening of the movie trailer:

“Based on the best-selling books by R.L. Stine. 62 books, 400 million copies sold. And one day…the stories came to life.”

(62 books! Can you believe that? And the fact that 400 million copies were sold is just insane)!

Text that appears in the movie trailer:

“This October, discover the one book no one was meant to find.” (I don’t know about you, but that one sentence right there is enough to make me want to see this movie).

Conversation between Sarah and Sonny:

Conversation between Sonny and Sam, as they come across a group of moving gummy bears:

(The gummy bears band together to form larger versions of themselves).

What’s in a name?

The cast isn’t the only thing that changed!

The director for Goosebumps 2: Haunted Halloween is Ari Sandel. This will be his 3rd movie as director, following the 2018- When We First Met and the 2015- The Duff.

A Tale of Two Scripts

There were 2 scripts written for the upcoming movie. One script featured Jack Black reprising his role from the 2015 movie and the other script wrote him out completely.

Speaking of Jack Black, his schedule was too full for him to be able to star in the upcoming movie. He is appearing in 2 movies this year.