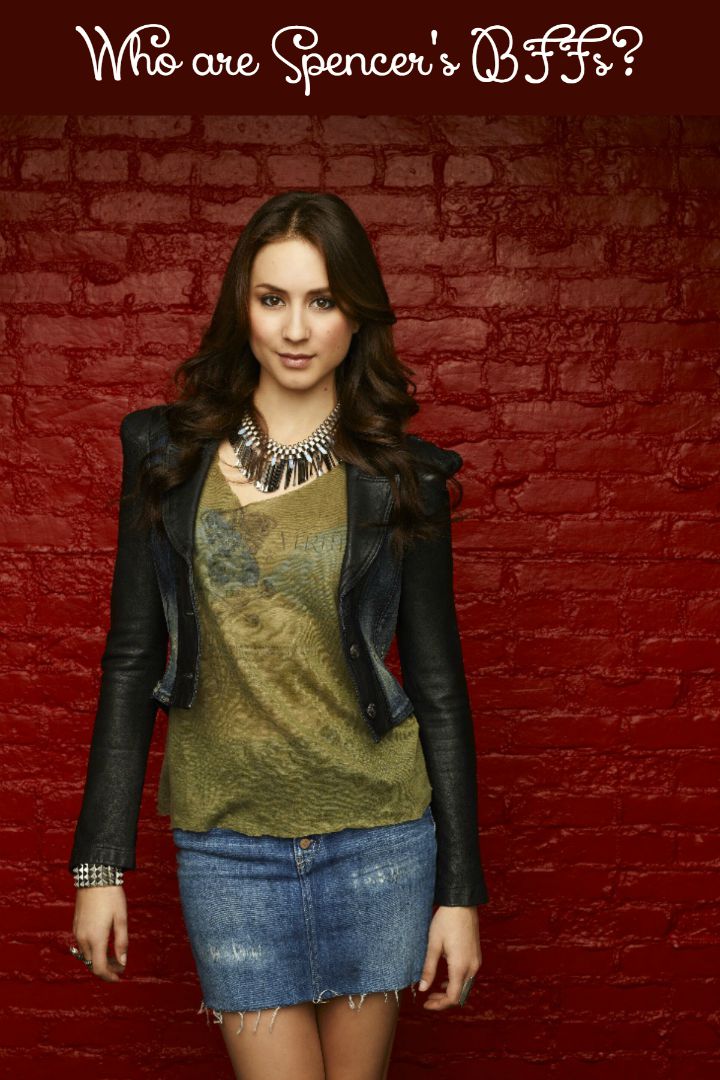 As you know, Spencer is one of the major players in Pretty Little Liars. In fact, the first book featured her on the cover, which is a bit telling, don’t you think? While the show is really about all four of the liars and focuses on no specific character in particular, Spencer definitely often stands out as THE liar to watch. Of all the girls, she’s been accused of murder the most often. Thankfully, her BFFs always stand by her side, even when she’s downing speed and falling down the rabbit hole. Let’s take a look at who those friends are!

Who are Spencer’s Closest Friends on Pretty Little Liars?

Toby: Let’s start with Toby, shall we? He’s not only her BF, but also her BFF. He wasn’t always, though. Spencer actually thought Toby was evil incarnate for a while in the first season. Once she got to know him though, she realized that he was pretty much her soul mate. Their romance hit a few rocky patches, especially when WE all thought perhaps he actually WAS evil incarnate for a moment a few seasons in! Lately, the romance seems to be, well, fizzling, but we’ll have to see where it picks up 5 years down the road when the 6th season returns.

Aria– Spencer is close to all three of the other girls but even more so with Aria. They have been extremely close since the beginning and confide in each other and support each other. They both have a love for literature and are more intellectual than Emily and Hanna. Don’t get me wrong, Ems and Hanna are smart, they just don’t share that passion for learning that Aria and Spencer have.

Emily– Spencer and Emily are also pretty close. Spencer was the first one to come to her defense with Paige when she made rude comments about Emily being a lesbian. With Emily, Spencer takes on sort of a protector role. They share a common love (albeit a platonic one in Emily’s case) for Toby.

Hanna– Spencer is closer to Aria and Emily in the group but is rather close to Hanna as well. They have a very fun relationship as Spencer is usually quick to point out the grammar mistakes Hanna makes and she also talks Hanna out of situations that may lead to trouble. Think of her as Hanna’s rational side.

Alison- Spencer’s friendship with Alison is much different than with the other girls. They are the two girls that are most alike and because of this, they often don’t see eye to eye on some things. Both girls are competitive, sophisticated, determined and smart. Spencer is the only one in the group that has the nerve to stand up to Alison.

Andrew– Andrew appeared on the show starting in season 3. He is the secretary of the Decathlon club where Spencer is also a member. At first, Andrew and the team choose to take Spencer off the team after losing in a quiz-off to Mona, resulting in her skipping team practices. In turn, Spencer challenges Andrew to a strip version of the quiz-off so she can obtain his vote and stay on the team.

Caleb– The friendship between Spencer and Caleb comes to light during season 3 when they are talking about fancy sweaters and hacking into Maya’s website. Many Pretty Little Liars fans thought the two had great chemistry together. However, they are just friends since Liars don’t steal each other’s boyfriends and Hanna is dating Caleb.

Jason– Jason and Spencer are not only half-siblings but they are great friends as well. The two don’t find out they are siblings until season 2 when Jason comes back to town and notices something is not quite right between her family and Jason’s family. Eventually, they figure out that her father is also Jason’s father. Spencer and Jason quickly form a trusting bond as they try to determine what happened to Alison.

There you have it! Spencer’s closest friends on Pretty Little Liars. It will be interesting to see where these friendships go once the season picks up again in January, 2016!

Which of Spencer’s best buds would you love to hang out with? Tell us in the comments!