These 7 War for the Planet of the Apes movie quotes prove that we’ll have quite a fight on our hands if the apes ever get around to revolting against us! Seriously, check them out and tell me they don’t creep you out. 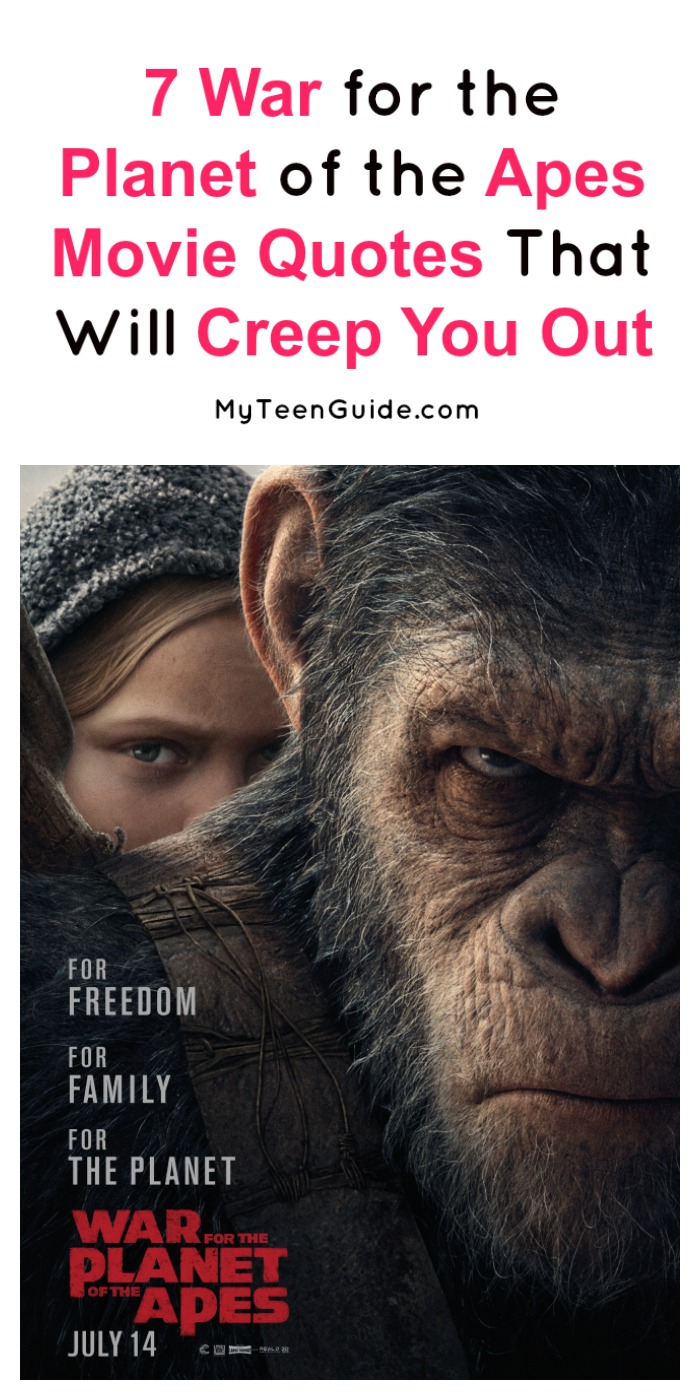 When it comes to movies that creep me out, Planet of the Apes has always ranked up there pretty high. It’s not a horror movie. It’s not filled with gore and guts. There are few- if any- jump scenes that make you fall off the couch in fright. No ghosts, no goblins, no movie monsters. Still, something about giant human-like monkeys enslaving mankind has always struck me as sort of foreboding. Like, could this actually happen? Probably not in our lifetime, but apes are constantly evolving, and at some point they’re probably going to think “you know what, we don’t need to live in cages or be hunted to extinction. WE could rule the planet!” See, creepy!

As you read these War for the Planet of the Apes movie quotes, remember, most of the scariest lines are spoken by the apes! Ready to check them out? We’ve also included quotes from the other movies in the franchise.

War for the Planet of the Apes Movie Quotes

1- Caesar, as a voiceover in the movie trailer:

Caesar- “I did not start this war. I offered you peace. I showed you mercy. But now you’re here. To finish us off… for good.”

Andy Serkis is the voice actor behind Caesar.

2- Colonel McCullough, as a voiceover in the movie trailer:

Colonel- “All of human history has led to this moment. The irony is we created you. And nature has been punishing us ever since. This is our last stand. And if we lose… it will be a Planet of Apes.”

The role of Colonel McCullough is played by actor Woody Harrelson.

3- Colonel McCullough, as a voiceover from the movie trailer:

Colonel- “Years from now your children will ask you, “What did you do in the greatest war?” And you can tell them, “I fought to protect this world.””

4- Bad Ape, as a voiceover from the movie trailer:

Bad Ape- “Human gets sick. Ape gets smart. Then human kills ape. But not me. I run.”

He is known as the Bad Ape, because that is what humans used to call him. Bad Ape is played by actor Steve Zahn.

5- Colonel McCullough, from the movie trailer

There are times when it is necessary to abandon our humanity to save humanity.

Quote from Dawn of the Planet of the Apes- 2014

6- Conversation between Ellie and Carver:

Ellie- “It was a virus created by scientists in a lab. You can’t honestly blame the apes?”

Carver- “Who the hell else am I going to blame? It was a Simian flu. They already killed off half the planet.”

Quote from Rise of the Planet of the Apes- 2011

7- Will Rodman, as a voiceover in the movie trailer, talking to board members:

Will- “Right away Caesar displayed signs of heightened intelligence. So, I kept him and brought my work home.”

Will Rodman is a scientist who uses chimpanzees to test ALZ-112, a viral-based drug said to cure Alzheimer’s disease. The role is played by actor James Franco.

Of all these War for the Planet of the Apes movie quotes, I think the one about abandoning humanity creeps me out the most. It seems kind of counterproductive, doesn’t it? It’s kind of like that saying “the ends justify the means.”  The “means” are probably how we ended up with apes in charge in the first place. These movies give me way too many deep thoughts. How about you?

Have you heard any great War for the Planet of the Apes movie quotes? Share below!