I absolutely love biographical movies like Can You Ever Forgive Me? because you get a true insight into the lives of real people who have had an impact on society.

The movie is due in theaters on October 19th, 2018 and showcases the true story of Lee Israel (played by Melissa McCarthy), a best-selling author/biographer-turned-literary forger.

However, while you’re waiting for the movie to hit theaters, here are some other awesome biographical movies that are based on the lives and careers of writers.

RELATED: 100+ Amazing Movies Like the One You Just Watched (Plus Free PDF) 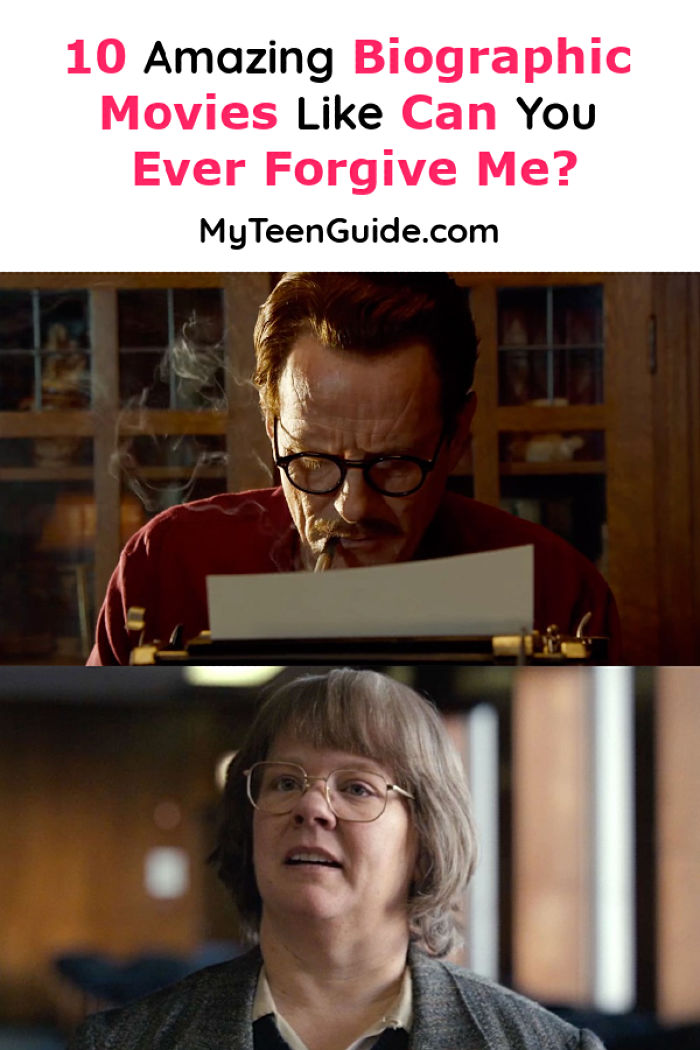 100+ Amazing Movies Like the One You Just Watched (Plus Free PDF)If you enjoy watching biographical movies as much as I do, you’re going to love them!

Let’ check them out!

Related:Can You Ever Forgive Me- Cast, Quotes and Trivia Guide

Before Night Falls is a 2000 biographical, drama, romance movie that is based on the 1992 autobiography of Reinaldo Arenas

, a novelist, playwright and poet best known for his set of works called Pentagonia, which talks about post-revolutionary Cuba.

American Splendor is a 2003 biographical, comedy, drama movie that centers on the life of Harvey Pekar, author of the comic book series of the same name.

Sylvia is a 2003 biographical drama movie that focuses on the romance between Sylvia Plath, a novelist, poet and short story writer and Ted Hughes, a children’s book writer and poet.

Eat, Pray, Love is a 2010 biographical, comedy, drama, romance movie that is based on the 2006 best-selling memoir by Elizabeth Gilbert, an author, biographer, essayist, memoirist, novelist and short story writer.

Wild is a 2014 biographical, adventure, drama movie that is based on the 2012 memoir- Wild: From Lost to Found on the Pacific Crest Trail- by Cheryl Strayed, an essayist, memoirist, novelist and podcast host.

The End of the Tour is a 2015 biographical drama movie that is based on the 2010 memoir- Although Of Course You End Up Becoming Yourself: A Road Trip with David Foster Wallace

Trumbo is a 2015 biographical drama movie that is based on the 1977 biography- Dalton Trumbo- by Bruce Alexander Cook.

The Glass Castle is a 2017 biographical drama movie that is based on the 2005 memoir by Jeanette Walls.

There are actually quite a few amazing biographic movies like Can You Ever Forgive Me?, so it was hard to narrow down the list. It really just depends on what type of biography you want to watch! These are my top picks that span just about every sub-genre, from music biography movies like A Star is Born to literary bios, like Miss Potter.