Get ready for all the Can You Ever Forgive Me? movie quotes, cast, & trivia you could ever need!

Here’s the biggest shocker of all: it’s a drama!

Well, mostly, as there are some funny parts. 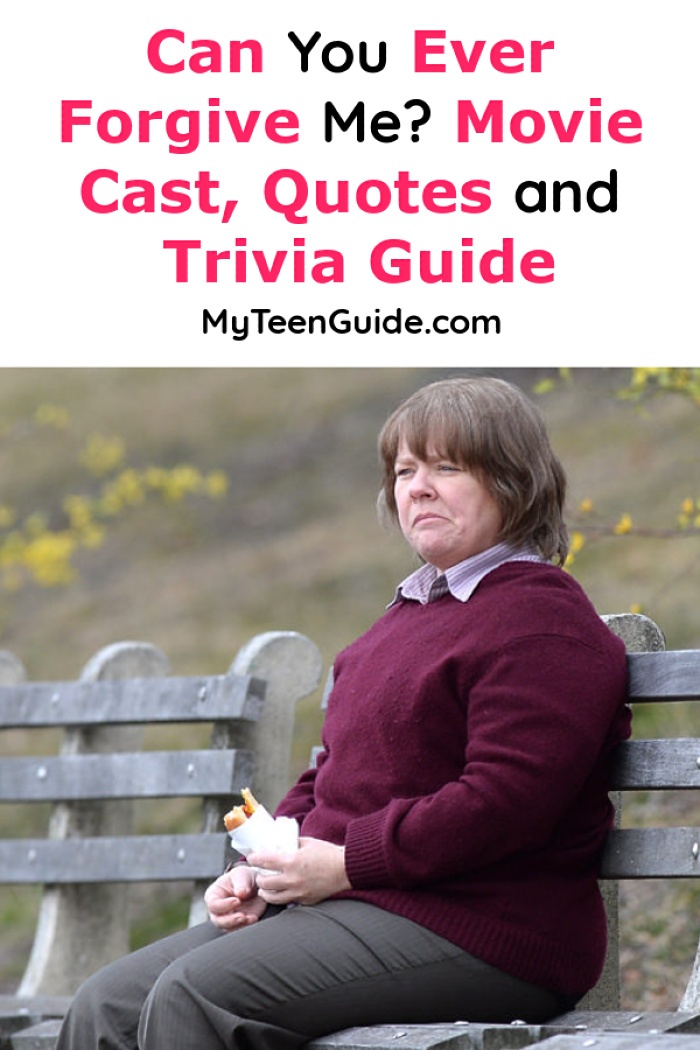 Still, it’s probably McCarthy’s most serious role to date, and we can’t wait to see how she pulls it off!

Read on your guide to Can You Ever Forgive Me?, hitting theaters on October 19th.

Related: 10 Movies on Netflix That Are Impossible to Stop Talking About

Can You Ever Forgive Me- Cast, Quotes and Trivia

Are you ready for a potential Oscar-nominated movie? I definitely think that Can You Ever Forgive Me? is a contender. Here are the basics:

Cast of Can You Ever Forgive Me?

On my way to @HSN with the new @MelissaMccarthySeven7 collection, and some exciting surprises! Tune in tomorrow and see what we're up to #McCarthyOnHSN

McCarthy is a woman who requires no introduction (but we’ll still give her one, anyway). While the award-winning actress played other small roles in the late 1990s and early ’00s, her career really took off after she played the role of Sookie on Gilmore Girls.

Grant is best known for his roles as Dr. Jack Seward in the 1992- Bram Stoker’s Dracula

, as Frederick Sackville-Bagg in the 2000- The Little Vampire

Can’t wait to see these two in Toronto soon. So psyched to be a part of this jewel of a film. #canyoueverforgivememovie #TIFF #foxsearchlight

Born in London, England, Wells  is best known for her roles as Mrs. Featherstone in the 2016- Pride + Prejudice + Zombies and as Vivian Prudeck in the 2017- I Do…Until I Don’t.

Embed from Getty Images
Spinella has won 2 Tony Awards, in 1993 and 1994. I bet you recognize his face, but don’t really know where you’ve seen him, right? He’s played minor guest roles in dozens of TV shows, from The Mentalist to

Can You Ever Forgive Me? Movie Quotes

Can You Ever Forgive Me? has some really great quotes! I’m not surprised, though, Melissa always has fabulous lines.  Check out the trailer, then read on for our favorites!

1. Conversation between a Bookstore Employee and Lee Israel, referring to some books:

Repost from @elizabethbanks ・ It's @tiff_net time so this #FemaleFilmmakerFriday I want to shout out the tremendous projects coming out of the festival by some badass women. I cannot wait to check out "The Land of Steady Habits" directed by the amazing #NicoleHolofcener, @canyoueverforgiveme directed by @mariellestilesheller (+also working with my pal @melissamccarthy!), and @destroyermovie directed by #KarynKusama working with the mesmerizing, @nicolekidman. ?Go support these #BadassWomen ?? ? ?

Conversation between Lee and Anna, after Lee forges a letter:

Conversation between Lee and Jack:

Conversation between Paul and Lee:

Can You Ever Forgive Me? + TIFF

Can You Ever Forgive Me? + TIFF

Posted by Can You Ever Forgive Me? on Saturday, September 8, 2018

Conversation between Lee and Jack:

Lee, speaking in a courtroom, at the end of the movie trailer:

Can You Ever Forgive Me? Movie Trivia

Lee Israel forged more than 400 letters, all from famous writers who were deceased. She served 6 months of house arrest and 5 years of federal probation, after pleading guilty to “conspiracy to transport stolen property” in June 1993.

#Wearorange was created to honor the life of #hadiyapendleton who lost her life to gun violence one week after performing at President Obama’s 2nd inauguration. Yesterday was the day she would have turned 21. We marched for her at the #youthovergunsmarchnyc and at all of the marches all over the US. We must all work together and Vote Vote Vote to keep our children safe from gun violence. @everytown @momsdemand @giffordscourage #nonra #msdstrong @lifecampinc ???

In April 2015, Julianne Moore was cast in the role of Lee Israel. She exited the role several months later because of creative differences.

I don’t want to take away anything from Melissa McCarthy as an actress, because she is highly talented, but I think I would have liked to see Moore play the role instead. Maybe because I associate McCarthy with comedic roles. What do you think? Maybe this movie will be the one that changes my mind!

Only the director’s second movie

Marielle Heller is the director for Can You Ever Forgive Me? Previously, she directed the 2015- The Diary of a Teenage Girl

, which was her movie directorial debut.

It’s not even out yet and the ratings are phenomenal!

The movie has already received positive reviews from the top two aggregator websites. On Metacritic, it has received universal acclaim due to its average score of 87 out of 100. On Rotten Tomatoes, the movie received an average score of 8.3 out of 10. (Can you believe this movie is doing so well already and it hasn’t even hit movie theaters yet)!

I don’t know about you, but I’m really intrigued by the whole idea of McCarthy in such a relatively serious role. I mean, it definitely sounds like it still has its funny moments, but for all intents and purposes, it’s a drama. I want to see it just to watch her in action!

Have you heard any other great Can You Ever Forgive Me? movie quotes or trivia? Share below!