Want to learn more about the motivations behind the main character in “13 Reasons Why”?

Check out 5 must-know Clay Jensen character traits (including how these traits changed in season 2)!

Clay Jensen in “13 Reasons Why” is probably one of the most interesting characters in the Netflix Original, and not just because he’s the main character (aside from Hannah, of course). 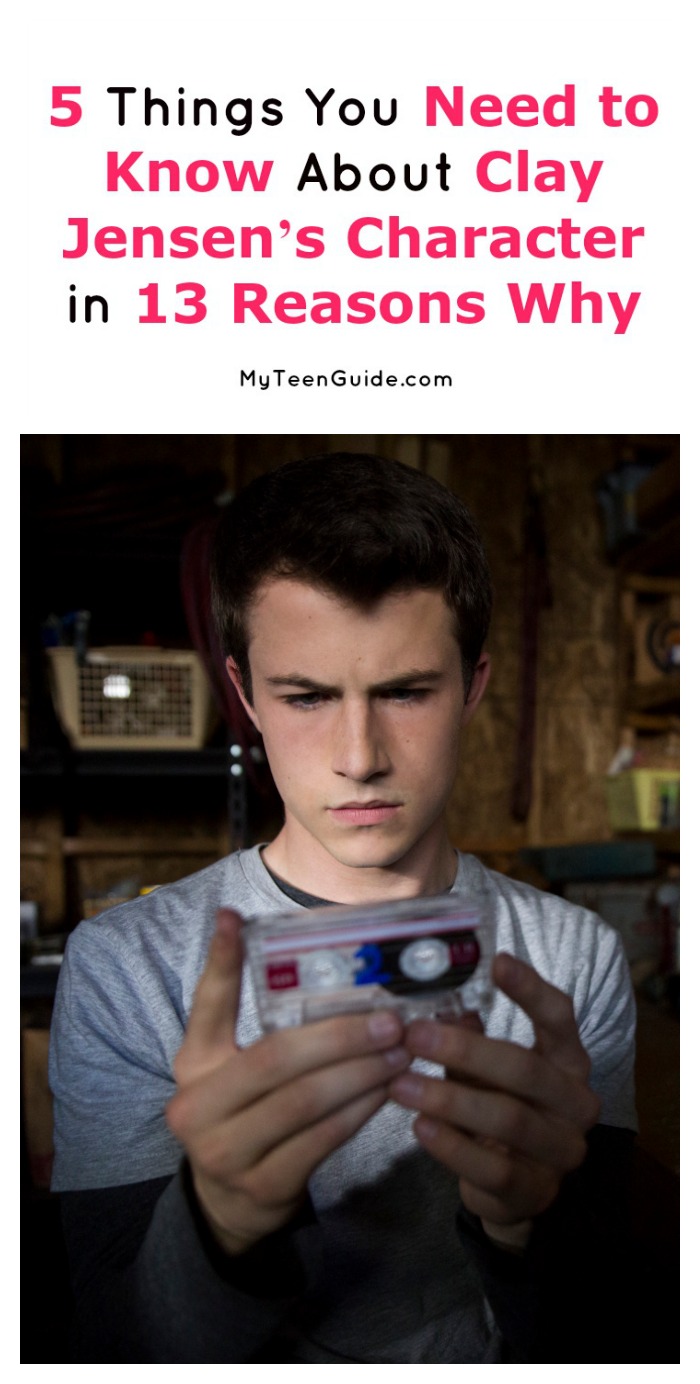 I’m pretty sure that most of us spent the 13 episodes screaming at him to just finish the tapes, right?

I mean, everyone else listened to them in one night, yet Clay takes a billion years to get through a single side!

I also spent the entire first season trying to decide if I actually liked Clay.

Some of his character traits drove me batty.

After all the controversy surrounding “13 Reasons Why,” a lot of super professional people spent an inordinate about of time analyzing the psychology behind Clay’s actions.

I’m not going to do that.

Instead, let’s talk about the things you really need to know to understand Clay Jensen and his role in the story.

Heads up, this post does contain a few spoilers if you haven’t watched the show already.

I tried not to give too much away, but I wanted to give examples of Clay Jensen’s character traits, so yeah, spoilers.

Throughout “13 Reasons Why,” Clay seems genuinely shocked by his classmates actions when he hears each of their tapes.

Yes, some of those actions are actually incredibly shocking, but let’s be honest here, high school is brutal. Just about everyone has a dark and twisty side.

He’s way too trusting, if you ask me. I mean, Tony practically tells the poor guy that he’s responsible for Hannah’s death (which is just mean on so many levels).

Despite the fact that he really didn’t do anything wrong to her on anywhere near as grand a scale as some of the other characters, he believes him.

This particular Clay Jensen character trait is probably the one thing that made me the craziest.

I felt like if he just had the confidence to tell Hannah how he felt about her, she may have known that she had one person who “cared enough.”

Would it have stopped her from killing herself?

Probably not, but at least he wouldn’t be left with guilt over the fact that he didn’t reach out when he should have.

The thing is, as many times as I screamed “just tell her!” to Clay in the show, we all lack confidence at times.

Telling someone how we feel about them requires a crazy amount of bravery.

Unless, of course, you know with 100 percent certainty that they feel the same way.

So yeah, he lacks confidence, but in his shoes, I probably would, too.

Eventually, he did tell her, but it was kind of too late.

3- Has his own history with anxiety

Okay, so this is more a medical trait than a character trait, but it’s important to the story.

While we don’t get a ton of details, Clay definitely has his own history with mental illness. I think this played a huge role in why Clay took forever to listen to the tapes.

I have anxiety disorder, and if someone told me that my name was a tape that detailed my role in a friend’s death, I wouldn’t be in a rush to get to my tape, either.

I also think that Clay’s history gave him a deeper sense of empathy for Hannah than the other characters, and that made listening even harder for him.


4- He puts people on pedestals

This may go back to his naive character trait, but did you notice how Clay kind of puts people on pedestals?

When they inevitably disappointed him, they fell hard in his eyes. Everyone talks about how Clay didn’t believe the rumors about Hannah, but if you watch his expressions and actions closely, it’s clear that he DID have doubts.

When the picture of her went out and she needed a friend the most, he let his doubt prevent him from being there for her.

She potentially did something to disappoint him, so he pulled away.

For the first time in a long time, I could imagine a future where I was happy.

5- He really did care enough, Hannah!

Hannah’s last words are all about how some people care a little, some care a lot, but none care enough.

In the end, though, and despite all his flaws, I truly believe that Clay was one person who really did “care enough.”

Maybe Tony did, too, since he raced over to stop her when he realized what she was doing, but Clay? This guy cared, Hannah. More than you knew.

I blamed his lack of self-confidence for the fact that he didn’t really tell her how much he cared, but Hannah didn’t make it easy.

If given the chance, I have no doubt that Clay would have moved mountains to save Hannah.

You never really know what's going on in someone else's life.

I think that Jay Asher is probably the only person who knows Clay’s motivation and intended character traits, but to me, these are the traits that really stood out and explained who he was.

How Did Clay Jensen Character Traits Change in Season 2

First, let me just warn you: season 2 is a lot more disturbing than season 1. There are some incredibly graphic scenes that will completely turn your stomach.

After a lot of backlash and controversy, it seems like Netflix wanted to prove that the show isn’t geared towards teens by making it as TV-MA as possible. This impacted all of the characters, including Clay.

Let’s see what Clay Jensen character traits stood out the most in season 2.  I’ll try to do this without too many spoilers.

1. He’s not so naïve anymore

In the first season, Clay was pretty naïve and relatively trusting most of the time. All that changes in season 2.

Now, throughout most of the season, Clay seems to have a hard time trusting anyone, including himself.

He also seems to see people as they are, not as he wants them to be. With one major exception: Hannah.

He alternates between keeping her on her pedestal and freaking out every time he learns something new about her.

If you thought Clay exhibited some anger issues in the first season, wait until you see him now. He looks perpetually ticked off- with good reason, of course.

During season 1, Clay did let his aggressive side out a few times, but in season 2 he kicks it up a notch.

There’s a scene towards the end of the season that is incredibly heartbreaking where he almost lets his anger destroy his life.

Trust me, you’ll know it when you see it. I worried about Clay a lot more in this season, all that anger isn’t good for anyone.

It sounds oxymoronic, but it’s true. While Clay definitely has some anger issues, he’s also more compassionate towards the people he blamed for Hannah’s death in season 1.

You’ll see this compassion come through a lot when Justin is involved. Again, I don’t want to give too much away, but it was really quite touching.

He’s also more compassionate towards Tyler, the boy that Clay retaliated against for stalking Hannah in season 1.

The cast of the emotional second season of @13ReasonsWhy speaks out about the new season and what it's like to work together on season 2: "We're just a big family" pic.twitter.com/JOKnhwnyW5

Sadly, Tyler needs a lot more than just Clay’s compassion to get past what happens to him in this season.

Warning: it’s incredibly graphic and beyond disturbing. It happens in the last episode, just when you think the show can’t possibly get any more TV-MA.

One Clay Jensen character trait that remained consistent from the first season is his inability to get past Hannah’s death.

He tries, he really does. He finds new love, attempts to put the tapes and everything else behind him. He fails.

A lot of that has to do with the trial against the school (not really a spoiler, since the entire season is about the trial). He thought that the case would settle, and he could work on forgetting. It didn’t, so he can’t.

5. He maybe cares too much

Hannah blamed everyone at her school, including Clay, for not caring enough. By the end of the 1st season, we see that Clay really did care.

By the end of the second season- especially in the last episode- we’ll see that maybe he cares a little too much. What he does in the season finale leaves you wondering, “would I go that far to save someone?”

Of all the players in 13 Reasons Why, Clay Jensen does seem to experience the most character growth throughout the season.

While not all that growth was good, in the end it did seem to balance out. Well, aside from the very end. We’ll have to see how that plays out in season 3!

Once again, I want to warn you that Season 2 is definitely for “mature audiences.” It deals with issues such as sexual assault, guns, extreme bullying, and drug use, often in graphic detail.

If you are struggling with any of these issues, or thinking about hurting yourself, please visit 13ReasonsWhy.info to find resources to help you get through it.

Do you agree with my Clay Jensen character traits analysis? Share your thoughts below!