20 Things You Need to Know About Mission Impossible: Fallout

Looking for all the best Mission Impossible: Fallout quotes & trivia?

Read on for everything you want to know about Tom Cruise’s latest mission, including facts about the cast! 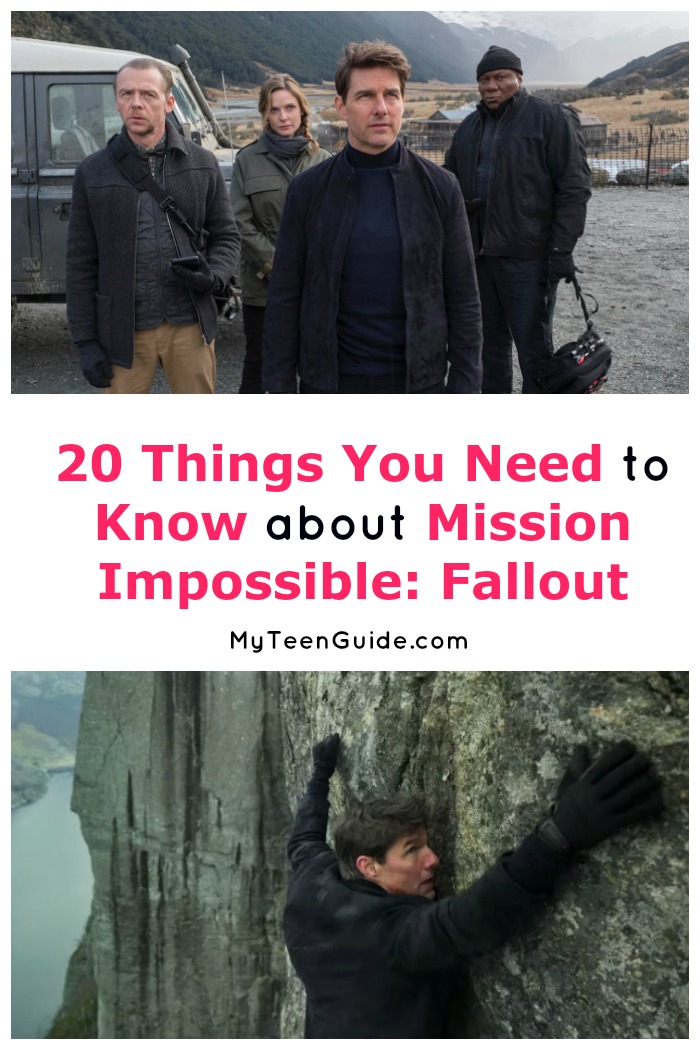 This message will self-destruct if you don’t read to the end! 😀

Okay, so that’s not true, but seriously, there’s loads of cool info here about the flick, so make sure you take it all in!

HEADS UP! Fandango has a great special offer to celebrate the upcoming release of Mission Impossible: Fallout!

Mission: Impossible- Fallout is an upcoming action, adventure, spy, thriller movie that is set to hit theaters on July 27, 2018. It is the 6th installment in the Mission: Impossible movie series, with the other 5 being:

This time around, Ethan Hunt and his team are in a race against time after an Impossible Missions Force (IMF) mission goes wrong!

Of course, we all know that Ethan Hunt saves the day like always, right?

Here is the cast of the upcoming movie, along with some awesome quotes from the movie trailer and some interesting trivia you may not know.

There are 7 cast members who are reprising their roles from previous installments and 2 new cast members to jump onboard the movie franchise.

Cruise has played this role since the 1st movie in 1996.

Pegg has played this role since Mission: Impossible III.

Ferguson has played this role since Mission: Impossible- Rogue Nation.

Rhames has played this role since the 1st movie in 1996.

Harris has played this role since Mission: Impossible- Rogue Nation.

Monaghan has played this role since Mission: Impossible III.

Baldwin has played this role since Mission: Impossible- Rogue Nation.

Cavill is one of the new members onboard, playing the role of August Walker.

Bassett is the 2nd new members onboard, playing the role of Erica Sloan.

So, if you have seen any of the previous Mission: Impossible movies, you know they have had some pretty cool quotes, right?

Well, this installment isn’t any different! Not only did I list some awesome quotes here for you, but I put them in the order they appeared in the movie trailer!

How cool is that?

Solomon- “There cannot be peace without first a great suffering. The greater the suffering, the greater the peace. The end you’ve always feared is coming. It’s coming. And the blood will be on your hands.”

Okay, so you’re probably wondering who Solomon Lane is, right?

Well, he is a former MI6 Agent who turned rogue and is now the Supreme Leader of The Syndicate, a criminal organization. And, of course, you know who Ethan Hunt is, correct? Yeah, the guy that Tom Cruise plays!

Erica- “Solomon Lane escaped in Paris. This is the CIA’s mission. You use a scaffold. I prefer a hammer.”

Not much is known about the character, Erica Sloan, since she is new, but it seems that she is some type of Central Intelligence Agency (CIA) Agent.

Alan- “You go rogue, he’s been authorized to hunt you down and kill you.”

4. Solomon Lane, in a voiceover in the movie trailer:

“When the clock stops, Ethan Hunt will lose everyone he ever cared about.”

Alan- “Accept it, Ethan, you’ve lost this one. What’s done is done.”

Ethan- “What’s done is done when we say it’s done.”

1. Only two actors have been in every movie

Tom Cruise (Ethan Hunt) and Ving Rhames (Luther Stickell) are the only 2 actors to have appeared in all 6 movie installments.

2. Accidents happen when you do your own stunts!

In August of 2017, during filming in London, Tom Cruise fractured his right ankle while performing a roof-jumping stunt.

Production shut down for about 8 weeks while Cruise recovered from his injury. (So, you know that Tom Cruise likes to do his own stunts, right?)

In Mission: Impossible- Fallout, Henry Cavill plays the role of CIA Agent, August Walker. In the 2015 movie- The Man From U.N.C.L.E.- Cavill also played the role of a CIA Agent, Napoleon Solo.

Tom Cruise was set to play the lead role of Napoleon Solo in the 2015 movie- The Man From U.N.C.L.E.

– but had to drop out so that he could film the 2015 movie- Mission: Impossible- Rogue Nation. Henry Cavill was later hired for the role.

There are 2 lead actors from the historical fiction television series- The Tudors (which aired from April 1, 2007 through June 20, 2010)- who have appeared in the Mission: Impossible movie franchise.

Mission: Impossible- Fallout will be the longest of the 6 films in the franchise. It is set to be 2 hours & 27 minutes long. The other 5 film’s running times are:

Now that you’re all caught up on all the Mission Impossible: Fallout trivia, quotes, and new cast members, it’s time to get your tickets! Skip the lines and grab them online from Fandango!

What are some of your favorite Mission Impossible: Fallout quotes or trivia? Share below!