We’ve got you covered! Merlin was one of my favorite shows, and I’ve been missing it so much since it ended.

Read on to find out how I filled the gap! Plus, learn about the cast of Merlin and find out what happened in the final season! 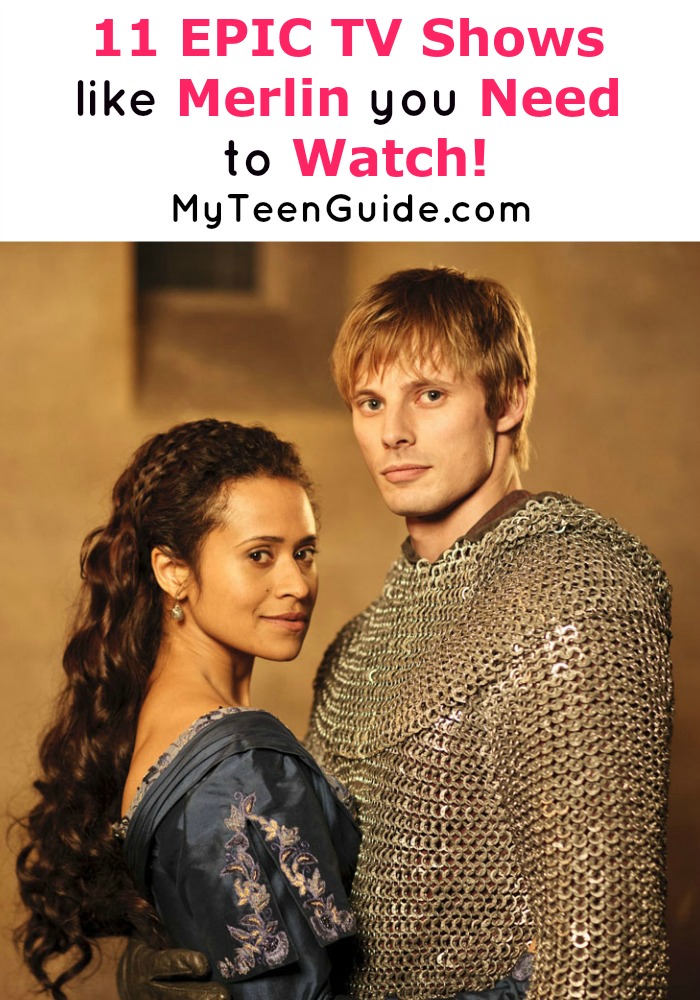 SPOILER ALERT! The sections on the cast of Merlin and the Season 5 episode guide contain spoilers.

If you haven’t watched the rest of the series yet, you may want to skip right down to the shows like Merlin!

If you haven’t seen Merlin, you should really give it a shot!

It aired for 5 seasons, with 13 episodes per season, for a total of 65 episodes. So, it will take some time for you to watch, but well worth it, in my opinion!

Think you know the story of the world’s most famous wizard? Think again!

While most of us know him as the robe-wearing, wand-waving older guy with a long white beard, we don’t really know much about his beginnings.

Merlin was young once, too!

The BBC series follows Merlin’s early years in Camelot- a city where magic wasn’t just outlawed, it was punishable by death.

Anthony Head (aka Giles of Buffy the Vampire Slayer) is the king, and Arthur is still years away from inheriting the kingdom.

Merlin comes to Camelot to study under Gaius (pronounced kind of like “guy-us”) and to work as a servant to Arthur.

He quickly learns that both he and Arthur have epic destinies that he needs to protect at all costs…all without getting caught using magic!

While Merlin had an array of guest and recurring characters throughout its 5 seasons, there were really only 6 main characters in the series.

Let’s learn a bit about each cast member!

Merlin is the show’s hero and lead character.

If you can’t get enough of Colin Morgan (Merlin), he is currently playing the lead role of Leo Elster on AMC’s sci-fi television series- Humans.

Arthur is the former Prince and former King of Camelot, the half-brother of Morgana- sharing the same father- Uther.

Gaius is a former sorcerer, the current Court Physician and Merlin’s friend, guardian and mentor.

Gwen is the Queen of Camelot, married to King Arthur.

The adventure continues… First look at Merlin The Diamond of the Day – Part One: http://www.bbc.co.uk/programmes/p012lyyw

It may sound odd to say this, but Morgana has always been a favorite of mine. I feel like she’s one of the most misunderstood characters of the entire King Arthur mythology.

Uther Pendragon is Arthur’s father, and the King throughout much of the series.

Now that you know about the characters and cast of Merlin, let’s find out what happened in the last season!

During the final season of Merlin, we really start to see the story that we all know begin to emerge.

Sir Gwaine, Sir Percival and other Knights of Camelot have not returned from one of their missions in the frozen tundra of Ismere. It is discovered that Morgana is behind the men’s disappearance, as Arthur and Merlin set out to rescue the men.

Arthur and Merlin are briefly taken hostage by the Saxons but manage to escape. Later, Mordred is made a Knight after he saves Arthur when Morgana tries to kill him.

When Arthur tries to communicate with his father’s spirit, he discovers that the spirit world is a dangerous place!

After King Rodor of Nemeth is captured by King Odin of Cornwall, Arthur, Gaius, Merlin and Princess Mithian of Nemeth, set out to rescue the King.

A trio of Soothsayers- known as The Disir Court- threaten to destroy Camelot unless Arthur legalizes sorcery.

Morgana holds Gwen captive in the Dark Tower- a fearful and menacing place!

Episode 7- A Lesson in Vengeance

Gwen and Morgana conspire to kill Arthur and Merlin realizes that Morgana must have done something sinister to Gwen!

A young Druid boy- Daegal- asks for Merlin’s help on a dangerous mission, but it is a trap that was set up by Morgana.

Episode 9- With All My Heart

Merlin knows that he needs to do something and fast before Morgana’s deviant control over Gwen gets any worse!

Episode 10- The Kindness of Strangers

Morgana is desperate to find out who Emrys is so she sets out to find Alator- the High Priest of the Old Religion and a magical warrior- believing he will reveal Emrys identity.

Episode 11- The Drawing of the Dark

When Mordred feels that Arthur has betrayed him, he joins forces with Morgana to reveal Emrys true identity.

After it is revealed that Merlin is Emrys, Morgana and Mordred team together to destroy Camelot!

As Morgana and Mordred put their plans into action, Merlin is faced with his greatest challenge yet!

Now that you’ve finished Merlin, you’ll be looking for more great magical, mystical, or heroic shows to sink your teeth into!

Read on for our top picks!

If you liked Merlin or are just a fan of the supernatural and magicalness you are in the right place.

I wouldn’t say this show is quite as intense or bloody as Game of Thrones, but I’d say it’s up there as far as the best things on TV to watch.

Check it out all the magical TV shows below!

Atlantis is a British fantasy-adventure television series that aired on BBC One for two seasons, from September 28, 2013, to May 16, 2015.

2. Legend of the Seeker

Legend of the Seeker is a fantasy adventure television series that aired on ABC for two seasons, from November 1, 2008, to May 22, 2010.

The shows quickly became one of my top shows to watch, and after it had ended I read the first couple Legend Of The Seeker “The Sword of Truth” books too!

I didn’t make it through all seventeen books, though, but the first couple were excellent reads!

Related: Wild Cards TV Show: Will it be as successful as Game Of Thrones?

Primeval is a science fiction drama television series that aired on ITV for five seasons, from February 10, 2007, to June 28, 2011.

Haven is a supernatural drama television series that aired on Syfy for five seasons, from July 9, 2010, to December 17, 2015.

Sleepy Hollow is an action, adventure, drama, fantasy television series that aired on Fox for 4 seasons, from September 16, 2013 to March 31, 2017.

The Shannara Chronicles is a drama, fantasy television series that aired on MTV and Spike for 2 seasons, from January 5, 2016 to November 22, 2017.

So have you seen any of these tv shows like Merlin?

Which series are you excited to add to your watch list?

Tell me in the comments!