Ultimate Guide to the 2018 Halloween Movie: Cast, Quotes and Trivia

Michael Myers fans are in for a treat with these Halloween movie quotes & trivia!

On October 19, 2018, Myers is back again to torment the sole survivor of his killing spree, in the direct sequel to the 1978 film.

While the upcoming  movie is the 11th installment in the Halloween movie franchise, it ignores all of the other sequels, except for the original movie.

This time, though, Jamie Lee Curtis’ character is ready for him! 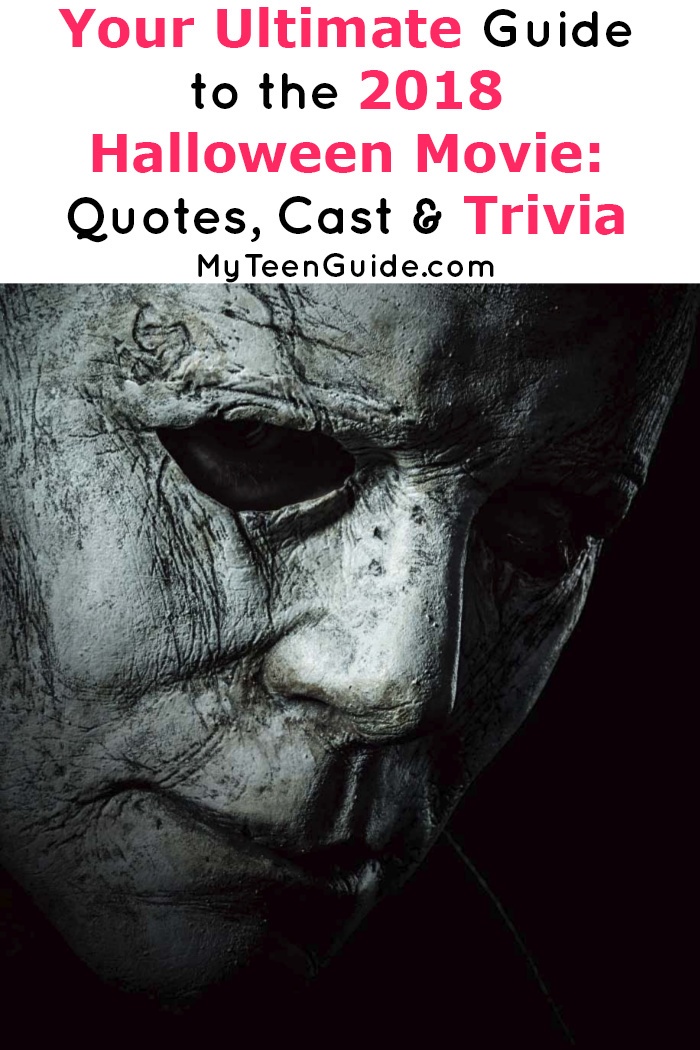 Make sure you’re ready, too, by checking out our guide to the 2018 Halloween movie, with quotes, cast info and fun facts!

Related:100 Horror Movies that Will Give You Nightmares for Years

The 2018 Halloween movie is interesting, because it’s not really a reboot, or even a continuation of the franchise. It’s kind of like a sequel reboot, if such a thing exists. Basically, just pretend that the 10 other sequels never happened.

Read on to find out who’s who in the Halloween movie cast, then check out some great quotes and trivia!

Related: 5 Of The Best Classic Horror Movies To Watch On Halloween

Jamie Lee Curtis returns to her role as Laurie Strode. She’s now suffering from PTSD after being the only survivor of Michael Myers’ killing spree in 1978, in which he killed her friends Annie, Bob and Lynda.

Judy Greer as Karen Strode, daughter of Laurie and mom of Allyson.

Andi Matichak as Allyson Strode, daughter of Karen and granddaughter of Laurie.

5. Will Patton as Sheriff Hawkins

Will Patton as Sheriff Hawkins, who helps Laurie in her plan to seek out revenge against Myers.

Now that we know who’s who, let’s check out some Halloween movie quotes!

1. Quotes from the 1st movie trailer, released by Universal Pictures on June 8, 2018.

Martin, a documentary filmmaker, in the opening of the movie trailer:

3. Conversation between Laurie Strode and Hawkins:

(WOW! Laurie is no longer that terrified babysitter from 40 years ago. Now, she is a woman on a serious mission of revenge).

4. Conversation between Laurie and Karen Strode:

(I am not sure whose idea it was to put Michael and several other mental patients, on a bus to be transported who the heck knows where, but it was a stupid one. I mean, seriously, it’s the middle of the night and they are in the middle of nowhere. Gee, what could possibly go wrong! SMH)!

5. Quotes from the 2nd movie trailer, released by Universal Pictures on September 5, 2018.

Dana and Martin, two documentary filmmakers, in a voiceover:

This trailer averaged about 871,151 views per day during the first few days after it came out! Check it out:

1. They don’t call her the scream queen for nothing!

Jamie Lee Curtis has appeared in 5 other horror films besides Halloween, including the 1980- Prom Night

2. There’s a reason why Andi Matichak was chosen

Before Andi Matichak was cast in the role of Allyson Strode, popular actresses Emma Roberts and Lucy Hale had expressed in the role. However, the movie studio wanted an unknown actress for the role. This was much like the 1978 Halloween movie because it was the debut film for Jamie Lee Curtis.

David Gordon Green is the director for the upcoming movie. This will mark his 13th movie as director. Some of his other movies include the 2007- Snow Angels, the 2008- Pineapple Express and the 2013- Prince Avalanche. (Isn’t the number 13 sometimes considered evil or unlucky? Guess since this will be his 13th directorial film, Halloween seems like the perfect fit, don’t you think)?

5. It’s Deja Vu All Over Again

If it feels like we’ve done the “pretend the rest never happened” thing before, it’s because we have! Remember Halloween H20

? It took place 20 years after the original and basically ignored all of the movies in between. I guess they figure 20 years is enough time to remember that we’ve already been down the “direct sequel” road!

I’m looking forward to seeing the 2018 Halloween movie. Aside from H20 (the other direct sequel), I think that most of the movies that came after the original got just a little silly. I mean, how many times can you kill the same guy? I think it will be interesting to delve into the mind of a woman who’s lived the last 40 years worrying about a killer escaping and coming after her again.

Have you heard any other great Halloween movie quotes or trivia? Are you looking forward to this one? Share your thoughts below!