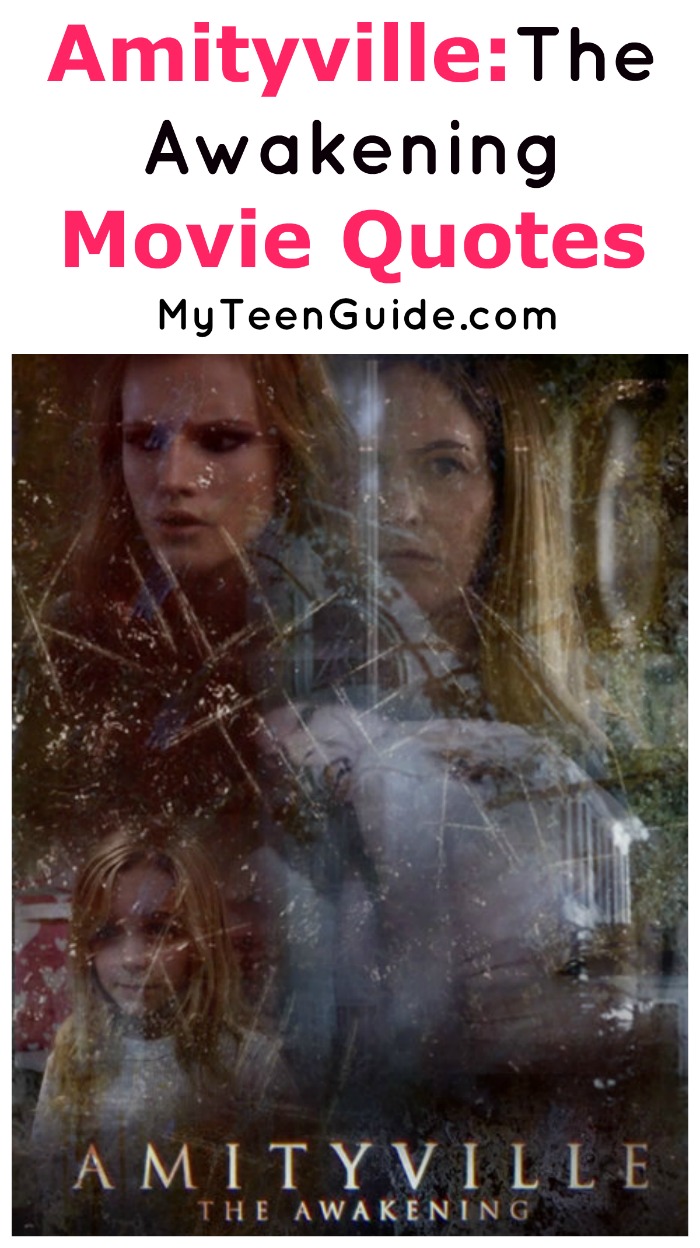 Are you ready to be scared silly? We have the creepiest Amityville: The Awakening movie quotes around! As I mentioned in our trivia post, I am seriously excited for this flick. I’ve been a huge fan of the horror movie franchise for as long as I can remember. I actually knew a guy who knew a girl who knew the guy who committed the horrible crimes that started all the madness in that house. Spooky, right? Check out a few of my favorite quotes (so far) from the films!

Quotes from Amityville: The Awakening- 2017

Amityville: The Awakening is an upcoming supernatural horror movie that is set to hit theaters on January 6, 2017. It is the 17th installment in the Amityville franchise, with the first one in 1979 titled The Amityville Horror. Here are some quotes not only from the new movie but also other popular versions of Amityville as well.

Belle, at the start of the movie trailer.

Belle- “Yeah home sweet home. It looks great besides the fact that I have to move to a completely new school and start all over again.”

Belle says this as her family is in the car, pulling up the driveway of their new home.

Joan to her daughter Belle, at the dinner table.

Joan- “We moved here because of St. Outlands has the best neurological department in New York. This house is going to be good for James.”

James is the brother to Belle and Juliet and is comatose.

Doctor Milton to Joan and Belle, regarding James condition.

Doctor- “There are no documented cases of anyone with James injuries ever recovering.”

The doctor tells them this fact, shortly after little Juliet tells Belle she wants to talk to James.

Terrence, talking to Belle in class.

Terrence- “It’s not you, it’s the house. In 1974, the owner of the house murdered his whole family. He said voices told him to do it.”

This is after Belle tells Terrence that something is not right in the house since she sees things and hears things.

Joan, talking to Belle, who just entered the kitchen.

The family is seated at the kitchen table, including a miraculously recovered James, who hears voices in his head saying Kill Them, Kill Them!

Quotes from The Amityville Horror- 1979

Conversation between Kathy Lutz and her husband, George Lutz.

Kathy- “I just wish that… all those people hadn’t died here. I mean… ugh! A guy kills his whole family. Doesn’t that bother you?”

George- “Well, sure, but… houses don’t have memories.”

Quote from Amityville II: The Possession- 1982

Conversation between Attorney Booth, to the judge, during the trial of Sonny Montelli.

Attorney- “Your Honor, it is my intention to prove that Sonny Montelli is a victim of demonic possession – that is, possession by the Devil – and therefore innocent of the charges placed against him.”

Judge- “Mr. Booth, I admire your originality. If I accept your plea, regardless of verdict, every courtroom in this country would be inundated with pleas of demonic possession. Nobody would be guilty of anything anymore. Quite literally, “The Devil made me do it.” You have three days to submit another plea, Mr. Booth.”

Sonny Montelli is on trial for the murder of his parents and younger siblings. After the family had moved into the house, Sonny became possessed by a demonic entity, who told him to kill his family.

Quote from The Amityville Horror- 2005

Father- “You know the doll with one eye that your daughter is holding?”

Father- “Well, that belonged to the little girl who lived here before you.”

Kathy- “Father, what exactly are you trying to tell me?”

Father- “I knew the DeFeo’s very well. I presided over their funeral. Jodie DeFeo was buried with that doll.”

In 1975, the Lutz family moved into the now-famous house on Ocean Avenue, where a year before, a man killed his entire family in the home after voices told him to do so. Kathy Lutz asks Father Callaway to bless their new home.

Do you have any favorite Amityville: The Awakening movie quotes? How about quotes from the other movies in the franchise? Share in the comments!