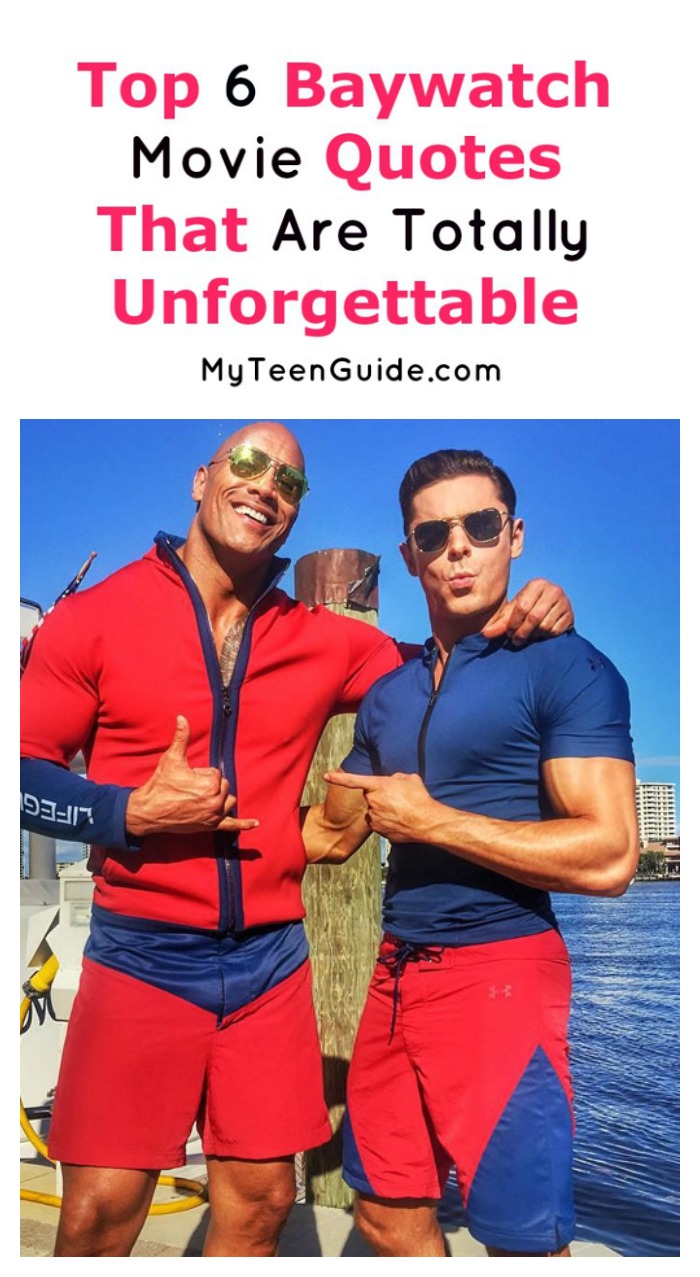 Looking for the most unforgettable Baywatch movie quotes? Check out 6 conversations from the flick that keep playing in our heads! Seriously, just hearing seeing these quotes are making me dream about the beach! Thank goodness summer is almost here, right? If you haven’t heard about it, Baywatch is an upcoming action comedy movie that is based on the television series of the same name. The movie is set to hit theaters on May 26, 2017. Here are some awesome quotes from the movie.

Mitch Buchannon, talking to his team of lifeguards:

Mitch- “Welcome to Baywatch. Our team is the elite of the elite. We’re the heart and soul of this very beach. We protect when other people don’t want to protect, and we go above and beyond.”

A conversation between Mitch Buchannon and Matt Brody, upon Mitch seeing him for the first time:

Mitch- “Hey, One Direction. Are you here for the qualifier?”

When calling Matt, One Direction, Mitch is referring to his pretty boy looks. Matt is played by actor Zac Efron.

Show off? Yes. Reckless? Yes. Awesome? You f’ing know it! #SummerIsComing?#BeBaywatch #Repost @zacefron: Had to. #BeBaywatch

A conversation between CJ Parker and Matt Brody, regarding the happenings of the lifeguards:

Matt- “Prevent people from getting sun burnt and occasionally stop them from drowning.”

The role of CJ is played by actress Kelly Rohrbach.

A conversation between Mitch Buchannon and Captain Don Thorpe, about hiring Matt Brody:

Mitch- “This is the guy you think is a good PR opportunity for us. He’s reckless.”

Captain Thorpe- “With two gold medals. How many gold medals do you have? Probably zero.”

The role of Captain Thorpe is played by actor Rob Huebel.

Sergeant Ellerbee- “You turned the canals into the goddamn X-Games.”

Matt- “Yeah, that’s because we were in lifeguard pursuit.”

Sergeant Ellerbee- “There’s no such thing as lifeguard pursuit! Even if you were police, what you did would still be totally illegal.”

Mitch- “Okay, well, I mean it’s a good thing we’re not police then.”

Mitch- “Drugs, murder, dead body on our beach and it all started once she took over.”

The role of Victoria is new for the movie, as it was not in the television series. Leeds owns a local club, which has brought the influx of drugs and murders to a place that used to be quiet and peaceful.

Have you heard any other awesome Baywatch movie quotes? Tell us below!