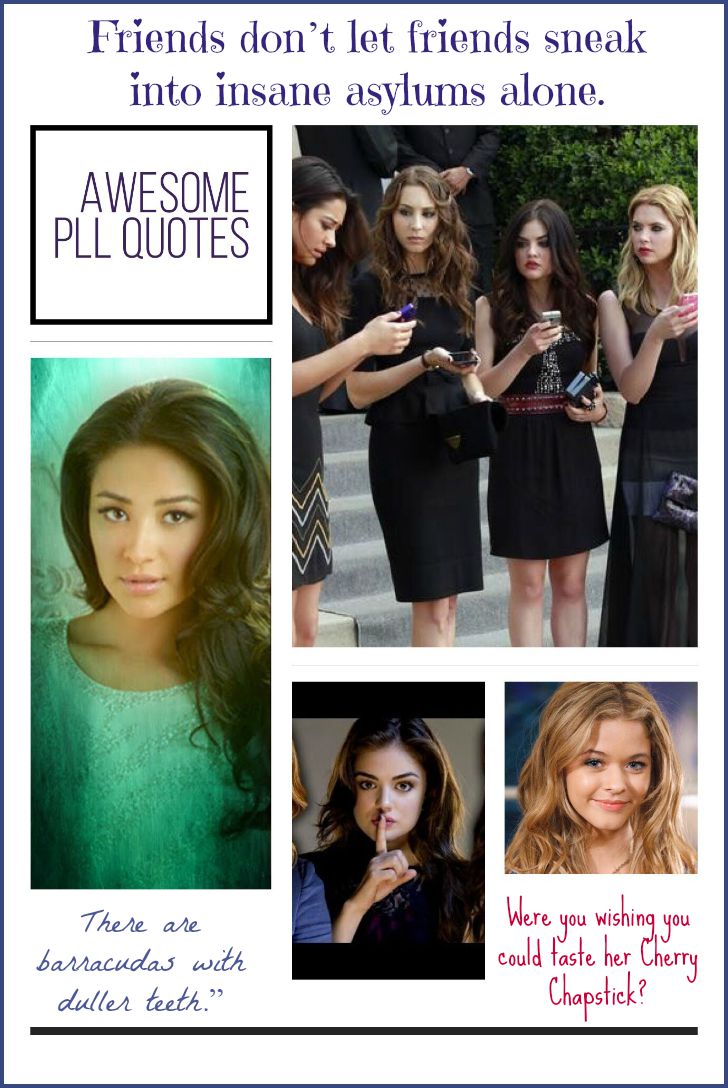 Episode 1- Pilot- Spencer says to Melissa, “Well, you know what they say about hope. It breeds eternal misery.”

Episode 21- Monsters in the End- Ezra says to Aria, “Are you gonna torture me because I gave somebody else a ring? Aria, seriously, it wasn’t even a karat!”

Episode 8- Save the Date- Hanna says, “Jenna can’t hear us; she’s blind…you know what I mean.”

Episode 13- The First Secret- Alison says to Emily, “Were you wishing you could taste her Cherry Chapstick?”

Episode 15- Let the Water Hold Me Down- Mona says to Spencer, “You’re like smart-smart. I always thought you were just book-smart.”

Episode 17- Out of the Frying Pan Into the Inferno- Hanna says, “I always hated biology. I mean who cares how a cell divides, it just does.”

Episode 11- Bringing Down the Hoe- Aria says, “It’s just been a long time since I could go to a school dance with someone I’m dating.”

Episode 22- Cover for Me- Spencer says, “Fantastic! I will go upstairs and fill this with my dignity.”

Episode 2- Whirly Girly- Toby says to Spencer about the next time he goes to London, “You’re taking me with you, and we’re never coming back.”

Episode 12- Taking This One to the Grave- Hanna says, “Read her boobs, the girl loves Christmas.”

Episode 24- I’m a Good Girl, I am- Emily tells Spencer that they need to talk to Hanna and soon. Spencer asks her what Leslie said. Emily responds, “I can’t. There are barracudas with duller teeth.”

What are your favorite quotes from Pretty Little Liars? Share in the comments!