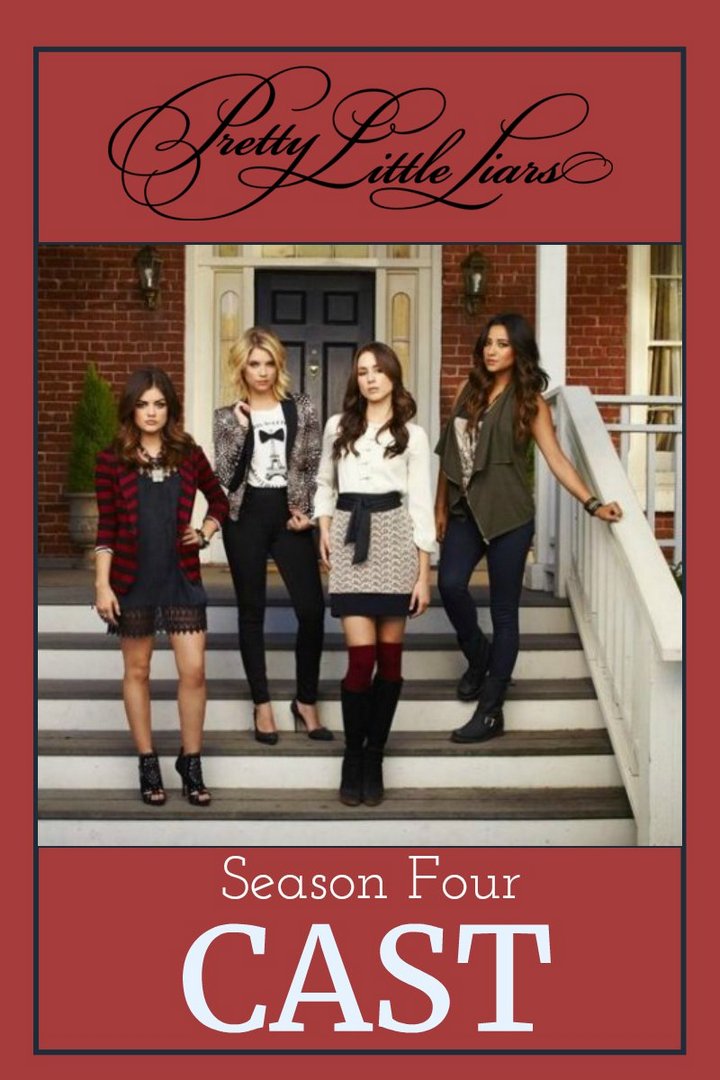 The 4th season of Pretty Little Liars started in June of 2013 and consisted of 24 episodes. Two new characters were introduced: Lieutenant Linda Tanner and Detective Gabriel Holbrook and two main cast members left: Ella and Byron Montgomery. Let’s check out the cast of Pretty Little Liars Season 4. Spencer, Hanna, Aria and Emily were the only characters to appear in all 24 episodes.

Related: Who’s Who in the Cast of Pretty Little Liars Season 1

Troian Bellisario– Spencer Hastings- She and Toby are back together at the lodge but A tries to split them apart. Spencer has flashbacks of the night Alison went missing and believe she may have tried to kill her, although we all KNOW Spencer couldn’t have done it. Could she have?

Ashley Benson– Hanna Marin- Hanna finds her mother’s cell phone in Wilden’s casket which leads her to think her mother may have killed Wilden. Her homecoming is bittersweet, especially after she finds a gun and muddy shoes in her mother’s bag. Hanna’s mother is arrested for the murder and sent to jail, which turns Hanna’s world upside-down.

Lucy Hale– Aria Montgomery- Aria and Ezra have ended their relationship and she is trying to move on. She enrolls in a karate class where she develops feelings for her instructor Jake. He’s totally not a good fit though. Sweet enough, sure, but just no chem there.

Shay Mitchell– Emily Fields- Emily is sidelined from her swim team when an injury occurs during a swim meet. When Emily steals a key to Wilden’s place from the place her mother works, her mother is suspended from her job. When a car crashes into their home, Emily first lives in Alison’s old room- creepy!- and then moves in with Spencer.

Ian Harding– Ezra Fitz- We find out that- say what??- Ezra and Alison had a short relationship and he has been tracking her and the others so that he can write a crime novel and figure out who A is. He gets shot by A in New York. No worries, he lives to see another A. I mean, day.

Keegan Allen– Toby Cavanaugh- Toby tries to get answers about his mother in this season. His relationship with Spencer is strained after he makes a deal with A and Spencer tells the other girls. Later, he realizes that he doesn’t care about anything A has to tell him. Is it just me, or is the chemistry between Tobes and Spence diminishing as seasons go on?

Sasha Pieterse– Alison DiLaurentis- We learn that Alison is alive after she was pulled from a shallow grave by Carla  (the uber-creepy psychic lady who I imagine did a stint on the failed Ravenwood). She eventually reveals someone is after her and escapes from the girls. They find her later and she opens up about the night she went missing. She explains she was hit over the head by an unknown assailant and buried alive when her mother thought she was dead. How do you NOT have mommy dearest issues after THAT?

Laura Leighton– Ashley Marin- She is one of the initial suspects in the death of Darren Wilden due to mysterious developments in the case.

Janel Parrish– Mona Vanderwaal- Mona discovers the computer chip from Darren Wilden’s car that shows that Ashley is the one who hit him with her car. At Wilden’s funeral, Ashley’s cell phone is discovered in his casket and Hanna immediately accuses Mona of planting the phone. When Mona eavesdrops on what the cops know about the Wilden murder, she and Aria investigate a tip at Torch Lake. While there, they discover high heel footprints that look a lot like the ones Alison wears.

Tyler Blackburn– Caleb Rivers- Caleb talks to Hanna about his visit with his dad and she confides in him about the allegations against her mother. He decided to tell Hanna’s dad what is going on with her and Ashley. Tom later tells Caleb that Ashley was at his house the night Wilden was killed, asking him for a large amount of money. When he leaves the room for a moment, Ashley leaves the house and Tom discovers his gun was missing.

That about sums up the major players in the Pretty Little Liars Cast- season 4. All in all, it was a good season, although not my favorite. I feel like we learned a lot, but also ended up with so many more questions. Ah, the nature of Pretty Little Liars. Even now, when we think we know everything, I’m sure we’ll find new surprises when the rest of season 6 plays out!

Who is your favorite from the Pretty Little Liars cast in season 4? Talk to me in the comments!