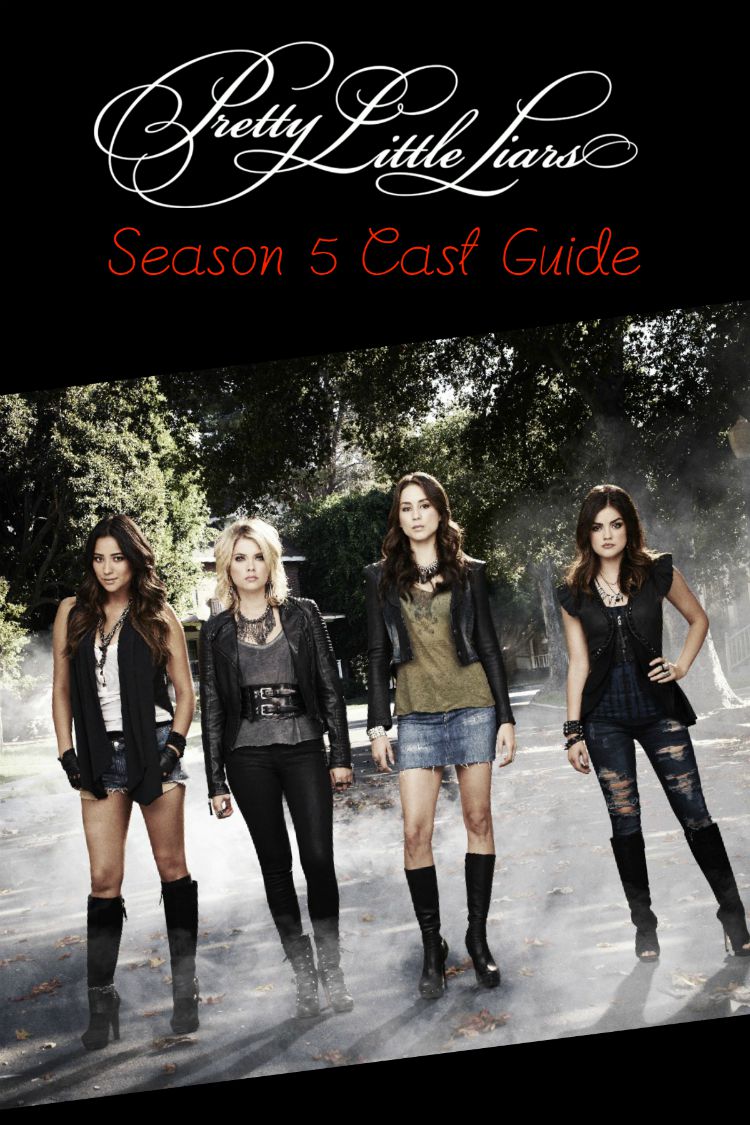 Planning on rewatching the 5th season of Pretty Little Liars to see if you missed any clues about Charles? Since it’s the last full season before the current one- which is on break until January 2016- I know I’ll be going back and watching it again! There HAS to be SOMETHING there, right? I mean, wow, that was a HUGE reveal! Can you tell I’m trying to be super vague for those who haven’t seen the big A reveal?

Troian Bellisario- Plays Spencer Hastings and appears in every episode. Melissa and Spencer’s rivalry finally ends when Spencer is arrested for the murder of Bethany after Melissa tells her she is the one who buried Bethany in order to protect Spencer. She is eventually released after the police realize Alison was responsible. She is later arrested for being an accessory to Mona’s murder with the others and they are kidnapped and held in A’s dollhouse.

Ashley Benson- Plays the role of Hanna Marin and appears in all of the season’s episodes. Hanna begins drinking heavily after Caleb comes back to town, which causes problems between her and her friends, especially Aria.

Lucy Hale- Plays the role of Aria Montgomery and appears in all of the season’s episodes. Aria is left to deal with the guilt of Shana’s death. She also rekindles the relationship she once had with Ezra until she betrays him. The two go their separate ways and Aria starts a relationship with her tutor Andrew. After being arrested for being an accessory to Mona’s murder, Aria is also kidnapped and held in A’s dollhouse.

Shay Mitchell- Plays the role of Emily Fields and appears in all of the season’s episodes. After Emily believes that Alison is really A, there is no way she will rekindle her romance with her. She begins a relationship with Paige but Paige suddenly moves to California. Emily then starts a relationship with her co-worker Talia but that relationship ends when it is discovered that Talia is married. Emily is also held in A’s dollhouse after being arrested for being an accessory to Mona’s murder and then kidnapped.

Sasha Pieterse– Plays the role of Alison DiLaurentis and appears in 19 episodes of season 5. When Alison returns to town, she has every intention of coming clean with the truth. However, she receives a text message that forces her to lie and tell everyone she had been held captive by her kidnapper for two years. The girls believe that Alison is actually A but soon realize she isn’t but learn that Alison has been found guilty of Mona’s murder.

Tyler Blackburn- Plays the role of Caleb Rivers and appears in 19 episodes of season 5. When Caleb returns to town, Hanna is confused by his return. When Zach tries to make a move on Hanna, Caleb punches him. Caleb is drinking a great deal and Hanna, Toby and Spencer try to stage an intervention for him. When he realizes he has been set up, Caleb tries to leave the intervention but is stopped by Hanna and he finally tells her the truth about his alcohol dependency. In the final episode of season 5, he assists Ezra and Toby with finding the van that A used to kidnap the girls.

Ian Harding– Plays the role of Ezra Fitz and appears in 18 episodes of season 5. The season opens with Ezra in the hospital after being shot in the stomach. Aria confides in him that she is the one that killed Shana. In the final episode of the season, Ezra helps Caleb and Toby locate the van that A used to kidnap the girls.

Janel Parrish– Plays the role of Mona Vanderwaal and appears in 14 episodes of season 5. After Mona gets a group of people together that were victimized by Alison before she disappeared to fight against her return to town, she is brutally murdered by an unknown assailant. However, at the end of the season, it is revealed that Mona isn’t dead but yet she is being held prisoner by A.

Which of the cast of Pretty Little Liars season 5 is your favorite? I love Aria. She’s always been my favorite. Although I do kind of like Mona, even if she is a bit evil at times.