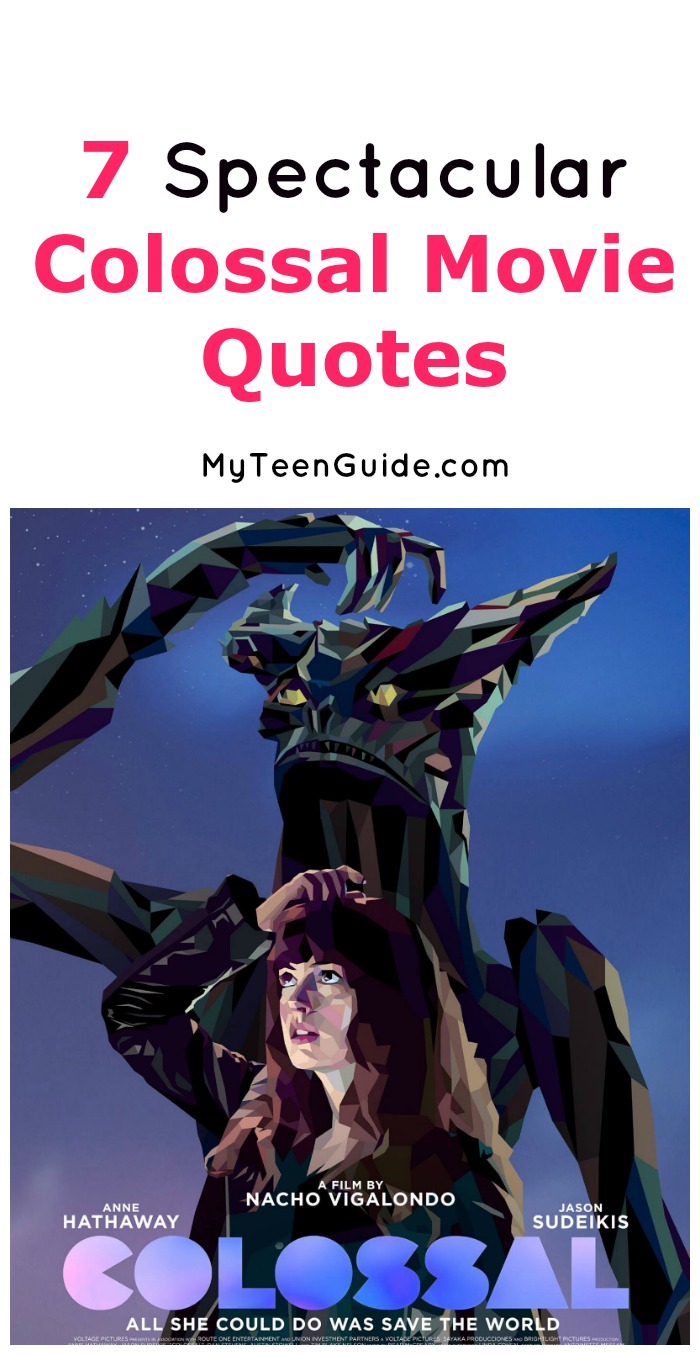 Find out why everyone is so excited for Anne Hathaway’s new movie with these 7 spectacular Colossal movie quotes! Colossal is an upcoming sci-fi comedy movie that will hit theaters on April 7, 2017. The movie, which also stars Jason Sudeikis, is about a woman named Gloria, played by Hathaway, who moves back to her hometown, after a run of bad luck in her life. She soon discovers that a giant monster is terrorizing Seoul, South Korea, and the monster is somehow mysteriously connected to the mental breakdown she is dealing with. Here are some awesome quotes from Colossal.

Conversation between Gloria and Tim:

Gloria- “I just watched the news and I think I’m in shock. A giant monster just materialized over Seoul.”

Tim- “That happened like nine hours ago, and you’re just hearing about this. What have you been doing all day?”

Conversation between Tim And Gloria:

Tim- “You are out of control!”

Tim- “I’ve packed your things, they’re in the bedroom.”

Gloria already lost her job because of her drinking issue and now she has lost her boyfriend, Tim.

Conversation between Oscar and Gloria, after a night of heavy drinking:

Gloria- “I got really melodramatic, didn’t I?”

Oscar- “You told me that you weren’t really on a vacation, that you’ve been looking for a job for a year, your boyfriend didn’t work out. And since you didn’t have any money you decided to move back here.”

Gloria- “Is there anything else?”

Oscar- “You don’t remember anything?”

After losing her job and boyfriend, Gloria heads back home. Oscar is an old friend of hers, who owns a bar. Oscar is played by actor Jason Sudeikis.

Garth, talking to Oscar about the monster:

Garth- “Have you ever noticed how it just keeps destroying everything in its path but it never looks down. It’s like it’s being operated by remote control.”

It is at this moment that Gloria realizes that she and the monster have some kind of strange connection.

Conversation between Oscar and Gloria, as she scratches the top of her head:

Gloria- “Yeah, it’s this nervous tick I have, I get this itch.”

Conversation between Gloria, Garth and Oscar, as the two men discover that Gloria and the giant monster are doing exactly the same thing:

Gloria- “I’m going to show you guys something.”

Garth- “Gloria, you’ve got to see this, it’s dancing.” Referring to the giant monster dancing.

Garth is one of Gloria’s drinking buddies and is played by actor Tim Blake Nelson.

Conversation between Gloria and Garth, as she feels her head in pain, at the moment a helicopter hits the giant monster’s head:

Gloria- “What was that?”

Have you heard any awesome Colossal movie quotes? Are you planning to see this movie? Share below!