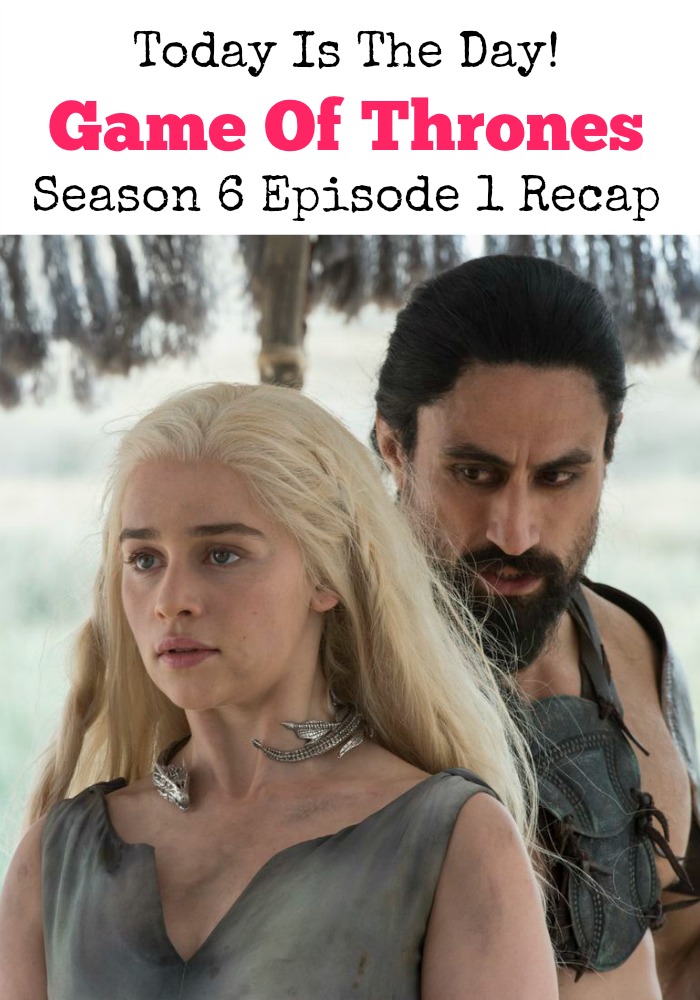 Most of us having been ravenous to know what in the world truly happened with Jon Snow, and the Game Of Thrones Season 6 Episode 1 recap should give us some answers! I don’t know about you but the end of season five left me shocked, a bit confused, and frustrated like crazy. You better start explaining Game Of Thrones, because I have been VERY patient. While I don’t expect this Game of Thrones Season 6 Episode 1 recap of The Red Women to answer all of my questions, let’s start picking up some of these pieces you shattered last season. Major spoilers ahead!

The beginning of the Game of Thrones Season 6 Episode 1 recap is setting the tone for the whole season. It’s time for us to return and start picking up the pieces so maybe our shattered hearts can go on. I mean, TBH we were probably all expecting a little more about Jon Snow in this episode. The reality is we have a whole cast of characters to catch up with, and you don’t want to miss those stories either. They can’t let us piece together the entire Jon Snow puzzle on the premiere. That’s just not the epic Game of Thrones style. Check out what happened below!

The opening scene focuses on the body of Jon Snow being discovered by loyal brothers of the Night’s Watch. Davos, who was formerly with the now dead Stannis, supports the loyalists in plotting a revenge plot against those who murdered Jon Snow. After learning of Jon’s death Melisandre, or better known as the Lady in Red, reveals in the flames she saw Jon fighting at Winterfell and seemed confused to learn of his death.

Meanwhile in King’s Landing Jaime Lannister arrives back with the body of his daughter Marcella who was poisoned at the end of the last season by Ellaria Sand. Jamie vows to Cersei that they will have their revenge and take everything back and more. The high sparrow continues to hold Margaery awaiting her confession of sin while her only request is to see her brother who is also held.

Outside of Winterfell Theon and Sansa Stark continue to evade from Ramsay’s hounds and men who have been seeking them since their escape. After a chase, they are caught and surrounded by Ramsay’s men only to be rescued by Brienne and Podrick. Brienne swears her life to protect Sansa, who accepts her offer.

A little #mondaymotivation for you: Be more like Brienne. Always keep your oaths. . . . . . #gameofthrones #got #brienne #brienneoftarth #gwendolinechristie #inspiration #motivation #badass #oathkeeper

In Dorne Prince Doran learns of Marcella’s death only moments before he is assassinated by Ellaria sand who vows that Dorne will never be ruled by weak men. His guards, excluding Areo who is killed in the situation, standby unaffected by Ellaria’s actions. Two of the other Sand sisters, who are present on the ship which brought Marcella back to King’s Landing also murder Doran’s son, Trystane.

Daenerys captured now by the Dothraki is taken to see the new Khal. She announces herself as the former Khaleesi of Khal Drogo and she learns of her new fate to spend the rest of her days with the other widow Khaleesi’ . While this is on going Jorah and Daario continue on the hunt for Daenerys. Tyrion walks the streets with Varys to get an idea of the situation in Meereen. In the middle of the walk, a fire breaks out at the docks and they discover all of the ships have been set on fire.

Arya, now blind and living homeless is shown for a brief moment begging for money before being offered to fight with The Waif. It seems like a tough love form of training after she walks away muttering that she’ll see her tomorrow.

The episode concludes with Melisandre undressing in front of a mirror however when she takes off a necklace she’s wearing she then appears in another form. She is then revealed as an elderly lady with white hair. The episode wraps up as she crawls into her bed… and Jon Snow is still dead.

That’s a wrap for now, I seriously can not wait for the next one already!

What did you think of the Game of Thrones Season 6 Episode 1 recap? Did the premier fill all of your expectations or are you still chomping at the bit for more? Tell me your thoughts in the comments!