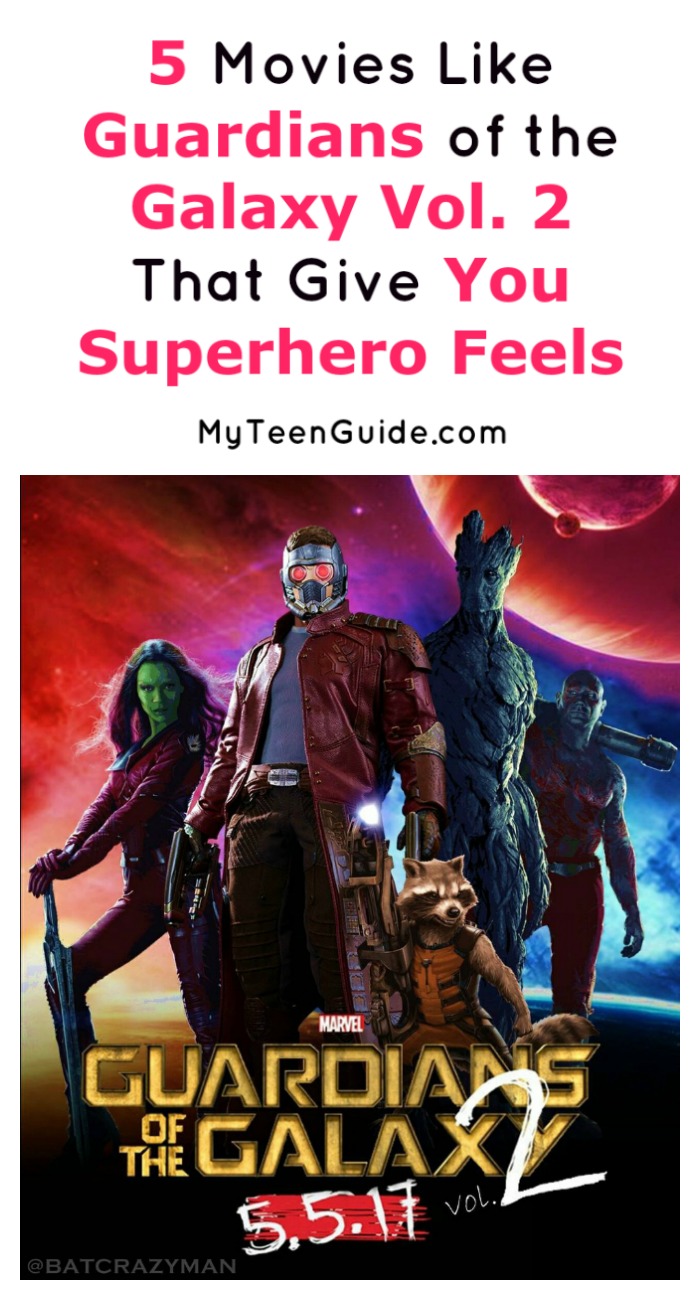 Looking for more fun superhero movies like Guardians of the Galaxy Vol. 2? Check out five more to add to your binge watching list! If you checked out our trivia post, you know that GotG Vol. 2 is an upcoming superhero movie that is set to hit theaters on May 5, 2017. It is the sequel to the 2014 film and features the return of favorites including Peter Quill, Drax the Destroyer, Groot, Rocket and Gamora. Here are some other awesome movies like Guardians of the Galaxy Vol. 2 to watch right now while you wait!

Related:5 Most Memorable Guardians of the Galaxy Vol. 2 Movie Quotes

The Hitchhiker’s Guide to the Galaxy

The Hitchhiker’s Guide to the Galaxy

is a 2005 science fiction movie that is based on the media series of the same name, which includes the 1979 book and the 1981 television series. The movie focuses on Arthur Dent, a journeyman and his pal, Ford Prefect, a researcher, who are whisked off Earth, minutes before it is destroyed. The Hitchhiker’s Guide to the Galaxy stars Martin Freeman as Arthur and Mos Def as Ford.

is a 2012 superhero movie that is based on the Marvel Comics team of superheroes of the same name. It is followed by Avengers: Age of Ultron in 2015 and the upcoming Avengers: Infinity War, set to hit theaters on May 4, 2018. The Avengers, consisting of Iron Man, Captain America, The Hulk, Thor, Black Widow and Hawkeye, team up to fight the enemy, Loki, and his team from taking over the universe. The Avengers features an all-star cast including Robert Downey Jr. as Tony Stark/Iron Man, Chris Evans as Steve Rogers/Captain America, Mark Ruffalo as Bruce Banner/The Hulk, Chris Hemsworth as Thor, Scarlett Johansson as Natasha Romanoff/Black Widow, Jeremy Renner as Clint Barton/Hawkeye and Tom Hiddleston as Loki.

is a 2013 that is based on the Marvel Comics character, Thor. It is the sequel to the 2011 movie Thor and the prequel to the upcoming movie Thor: Ragnarok, set to be released on November 3, 2017. Thor and Loki fight together to battle against the Dark Elves, who are trying to destroy the Nine Realms. Thor: The Dark World stars Chris Hemsworth as Thor and Tom Middleston as Loki.

is a 2014 superhero movie that is based on the Marvel Comics characters. It is the sequel to the 2006 movie X-Men: The Last Stand as well as the 2011 X-Men: First Class. It is the 7th installment in the X-Men film franchise, with the others being X-Men in 2000, X2 in 2003, X-Men Origins: Wolverine in 2009, The Wolverine in 2013, Deadpool in 2016, X-Men: Apocalypse in 2016 and Logan, released in theaters on March 3, 2017. Wolverine is sent back in time to not only change the course of history, but to prevent Trask from being killed by Mystique. X-Men: Days of Future Past stars Hugh Jackman as Wolverine and Jennifer Lawrence as Mystique.

is a 2015 space opera movie. Jupiter Jones discovers that she is a descendant from somewhere beyond Earth. She teams up with Caine Wise, who is part human and part dog, to protect the people on Earth, who are in grave danger. Jupiter Ascending stars Mila Kunis as Jupiter and Channing Tatum as Caine.