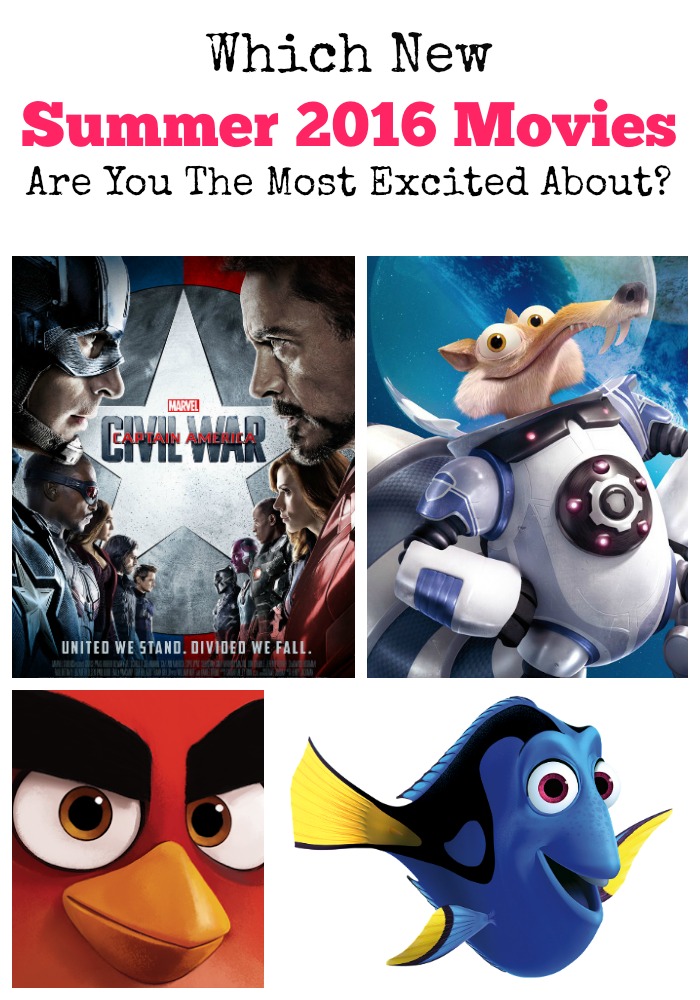 I can hardly wait for all of the new summer 2016 movies! Will there be an amazing new blockbuster that sweeps the summer? What movie am I going to catch on that super rainy day? The summer of 2015 brought is blockbuster hit movies like Mad Max: Fury Road, Pitch Perfect 2 and Ant-Man. The new summer 2016 movies are lining up, and some of these trailers look fun! Here are some of the best movies coming out this summer that I know you will love.

The Angry Birds Movie is a 3D computer animated comedy adventure movie hitting theaters on May 20, 2016. The movie is based on the popular video game of the same name. It features the voices of Jason Sudeikis, Josh Gad, Bill Hader, Maya Rudolph, Danny McBride and Peter Dinklage. I was a bit skeptical of this one. What’s next, Plants Vs Zombies the movie? The trailer for The Angry Birds Movie looks pretty cute. This time, the Angry Birds are saving the world!

Finding Dory is a 3D computer-animated adventure comedy movie hitting theaters on June 17. 2006. The movie is a sequel to the 2003 movie Finding Nemo and depicts the story of Dory, who lost her memory, but remembers something important about the Jewel of Monterey, California. It features the voices of Ellen DeGeneres, Albert Brooks, Diane Keaton, Hayden Rolence and Eugene Levy. I am SOOOO excited about Finding Dory. This movie is going to be amazing! I almost got a little teary the second the soundtrack in the trailer started playing, yay Dory!

Ice Age: Collison Course is a 3D computer animated adventure movie hitting theaters on July 22, 2016. This is the 5th installment in the Ice Age movie series, with the other 4 being the 2002 Ice Age, the 2006 Ice Age: The Meltdown, the 2009 Ice Age: Dawn of the Dinosaurs and the 2012 Ice Age: Continental Drift. In this movie, Scrat mistakenly sets off events that threaten the planet. The movie features the voices of Ray Romano, John Leguizamo, Denis Leary, Queen Latifah, Jennifer Lopez and Jesse Tyler Ferguson.

So which of these new summer 2016 movies are you excited about? Finding Dory is top of my list, but these other movies look fun too!

Tell me which movie you are dying to see in the comments!