There’s nothing quite like back to school movies on Netflix to help get you in the spirit of the season (the books, lockers and 6AM wake-up-call season, that is!).

The hot, lazy days of summer have come and gone.

Related: Back To School Party Ideas for Teens 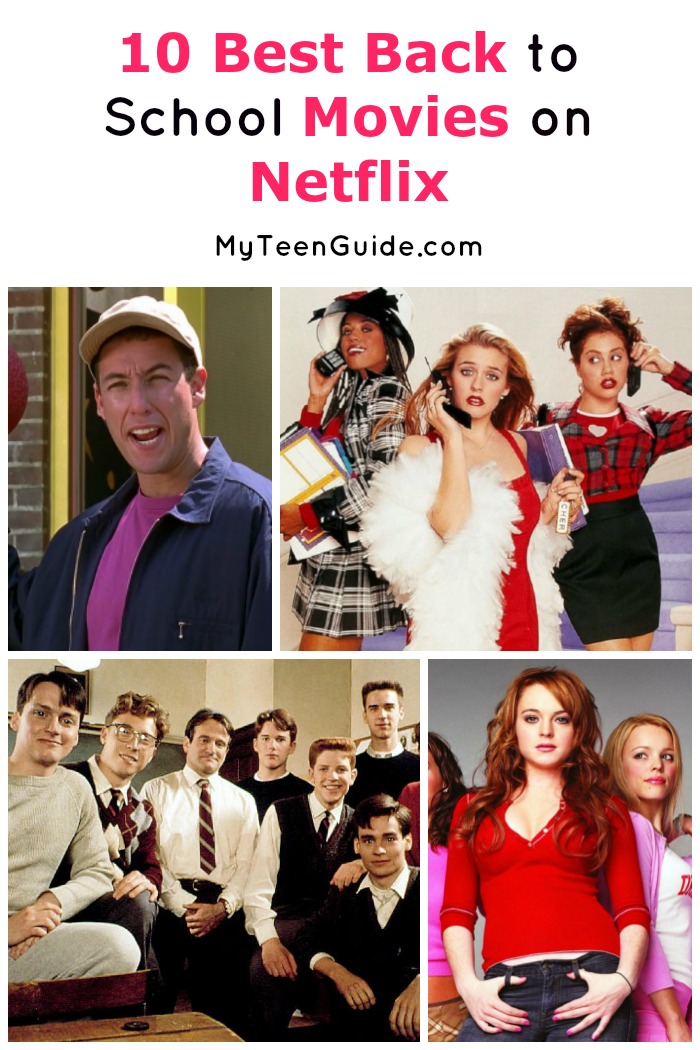 School isn’t always a bad thing as it is a time for new ideas, friendships and experiences.

Check out our picks for the best teen back to school movies on Netflix that are perfect for a movie marathon night with friends!

Best Back to School Movies on Netflix

We’ve also included Watch Now links to Amazon in case you prefer to watch the movies there.

Clueless was always one of my favorite back to school movies! It is a 1995 coming-of-age comedy movie starring Alicia Silverstone, Stacey Dash, Brittany Murphy and Paul Rudd.

If you’re looking for a hilarious flick to watch with friends, you need to check out Old School.  Old School is a 2003 comedy movie starring Luke Wilson, Vince Vaughn, Will Ferrell and Jeremy Wilson.

Billy Madison is probably the funniest “back to school movie” of all time, if not one of the top 10 funniest movies in general! It is a 1995 comedy movie starring Adam Sandler, Bradley Whitford, Bridgette Wilson, Norm Macdonald and Darren McGavin.

The Breakfast Club is another must-watch for every teenager in high school. This oldie but goodie is a 1985 coming-of-age comedy-drama film starring Judd Nelson, Molly Ringwald, Emilio Estevez, Anthony Michael Hall, Ally Sheedy and Paul Gleason, aka The Brat Pack.

For something a little more serious yet incredibly inspiring, check out Dead Poets Society. It’s a 1989 drama movie that is set in 1959 at an elite, conventional boarding school.

A Cinderella Story is a 2004 teen, romantic, comedy movie that is a modernization of the Cinderella fairytale.

Boyhood is a 2014 coming-of-age, drama movie that won a Golden Globe Award for Best Motion Picture-Drama.

Mean Girls is a cult classic flick that has inspired many memes over the years. It’s one of those movies that every teen should watch before graduation.

Of all these movies, The Breakfast Club was the epitome of the “teen experience” during the 80s. It pretty much showed members from every clique found in high schools across America. If you’re looking for something that shows a slightly more modern spin on high school, Mean Girls is my top pick.

What are your favorite back to school movies on Netflix that show the life of teens (whether real or totally far-fetched)? Share in the comments!