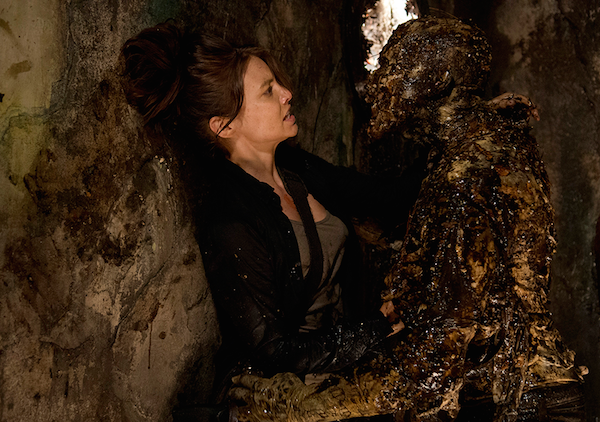 So this week at The Walking Dead, season 6, ”Now” episode, we are back in Alexandria. So, no we don’t learn anything new about Glenn again tonight. At this point, I think the producers of the show want us to suffer in agony while we learn Glenn’s fate. Tonight, we did see the storylines of several characters, including Maggie. Read our recap to get caught on the highlights of the episode.

Maggie and Aaron grow closer as he is there for her while she is emotional, not knowing whether or not Glenn is alive or dead. The show opens with Rick at the gate of Alexandria, with walkers all around him until Michonne opens the gate to let him in. The last time we saw Rick, he was in an RV, surrounded by walkers. There is no explanation as to how he got from the RV to the gate, but we are left to assume that Rick left the RV and took off when the RV wouldn’t start.

The folks inside Alexandria are scared since there are thousands and thousands of walkers outside their community. But Rick tries to assure them that they are safe for now but some of the townspeople don’t believe Rick at all. However, Aaron steps in and tells everyone that the Wolves found Alexandria because he left his bag behind. Deanna turns and walks off, leaving Tobin to wonder why she won’t make a call on the situation at hand. The people in town begin doing their own thing since there seems to be no leadership anymore, with Deanna in her little world. Some of them head to the pantry to get food so their families won’t go hungry. Spencer stops everyone telling them that looting all the food will not solve anything. Deanna appears and is glad to see her son taking the leadership role.

Aaron comes across Maggie, as she is getting ready to head out to find Glenn. Aaron doesn’t want her going alone, so he tells her he is going with her. Meanwhile, Deanna is at her house, drawing a map of what the town should look like in the future, complete with a medical area, crops and education area. She is distracted when she hears glass crashing in the kitchen, where she finds Spencer getting drunk. She also discovers that he has stolen food from the pantry. When she confronts him, he lashes out at her blaming her for the death of Reg and Aiden.

Carl and Ron end up in an argument over Enid, who is currently among the missing. Carl wants to go out looking for her but Ron doesn’t want to, and he threatens to tell Rick if Carl heads out to look for Enid.

Maggie and Aaron head to the underground tunnel, on their journey to look for Glenn. Maggie tells Aaron to stay behind, but he insists on going with her. And it’s a good thing because moments later, Aaron needs to save her from a walker.

Meanwhile, Rick is at one of the lookout spots where he radios to his friends. He calls out for Daryl, Sasha, and Abraham, but there is nothing on the radio but silence. Ron approaches Rick and informs him of Carl’s plan to find Enid. He also reminds Rick that he told him he would teach him to defend himself. Rick pulls out his gun, takes the bullets out and hands it to Ron for practice.

Dr. Denise helped one of her neighbors get well, with Tara’s encouragement. When the doctor steps outside, Tara is sitting on the steps, and she kisses her, Tara doesn’t resist.

Aaron and Maggie reach the end of the tunnel, with walkers close by. She tells Aaron that the reason she didn’t go with Glenn is because she is pregnant. (WOW) She says that if she had gone with him, she could have helped him if he got into trouble. Maggie doesn’t know if Glenn is alive or not and says that Glenn would have found a way to show her by now that he is still alive. Aaron hugs Maggie to comfort her.

Deanna is headed to the pantry to return the items her son stole when she is attacked by a walker. She is carrying a bottle, which breaks and she can use that as a weapon against the walker. She is stabbing the walker, when Rick appears and stabs the walker in the head. Rick tells her that she needs to lead the community, but Deanna says that it is Rick that they need as their leader.

Maggie goes to the wall of remembrance and removes Glenn’s name from it. Aaron tells her that she should keep the name Aaron in mind for her baby, whether it is a boy or a girl.

Rick heads to Jessie’s house to tell her why he didn’t want her to bury the bodies of some of the walkers and that reason is that his friends are not there. Jessie assures them that they might still be alive, and Rick leans in to kiss Jessie.

The Walking Dead- Season 6, Episode 5- “Now” ends with Deanna pounding on the fence in frustration. As she walks off, we see a strange blood trickle from a small opening in the wall. Could it be Glenn?

Did you watch The Walking Dead- Season 6, Episode 5- “Now” yesterday? Were you expecting to hear about Glenn’s fate like me? Do you have anything to add to this recap. Tell me.