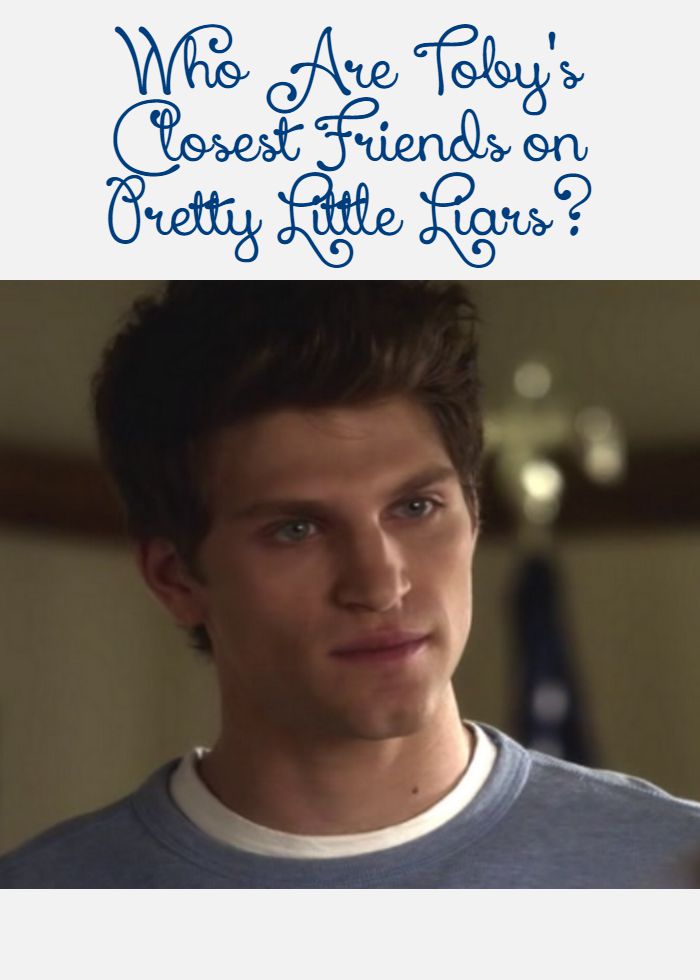 If you’re a fan of Pretty Little Liars,  you know that Toby hasn’t always had the best luck in Rosewood. He’s been framed for blinding his sister, accused of murder and suspected of being A. He even got himself shot when he accidentally ate some special candy meant for his girlfriend. Honestly, it’s amazing that he even WANTS to be friends with anyone in that town! He has a good heart, though, and that inspires loyalty once people get to know him. Check out our guide to Toby’s closest friends on Pretty Little Liars.

Who are Toby’s Closest Friends on Pretty Little Liars?

Spencer– Spencer is not only his girlfriend but his best friend as well. He is the only person that she trusts in her life besides Aria, Emily and Hanna. Spencer confides to Toby everything she knows about A so that she can protect him. On Spencer and Toby’s one year anniversary, she discovers that Toby is working with Mona on the A-Team. She is devastated and ends their relationship. However, they reunite when Toby tells her that he only joined the A-Team to protect her.

Lorenzo– Lorenzo is Toby’s partner on the police force in Rosewood. Lorenzo is mature and level-headed when compared to Toby. Evidence of this was when they caught Andrew and Toby wanted to kick his butt but Lorenzo stopped him. Lorenzo is not only a cop but he is also a coach for boys youth soccer.

Related: Who’s Out to Get Toby?

Caleb– Caleb and Toby started a friendship when they were both trying to find out exactly who A is. Toby was also detrimental in attempting to help Caleb to overcome his drinking issues. Toby also supported Caleb when he was trying to move past things from Ravenswood that were still bothering him.

Emily– Toby and Emily became close when her boyfriend Ben tried to rape her at school and Toby stepped in to protect her. Emily is grateful to Toby and the two practically become besties over time. The other girls all warn Emily to stay away from him because they believe he is A but Emily believes in him and trusts him. When Toby finds out that Emily is a lesbian, she is slightly embarrassed that he found out but he uses the opportunity to tell Emily that she needs to be who she is and not what everyone wants her to be.

Mona– Here’s a question for you readers: should we consider Mona one of Toby’s closest friends on Pretty Little Liars? Mona and Toby were both part of the A-Team, sort of. Mona was a patient at Radley Sanitarium when she disguised herself as a nurse to escape the facility. Later on, she is seen walking back to the facility with another black-hooded member of the A-Team. She tells the member she will see him soon and enters the facility. When the hooded member turns around, the television viewers find out that it is actually Toby. Turns out Toby had legit reasons, so I probably shouldn’t have thrown the remote across the room after all.

What do you think, Pretty Little Liar fans? Did we miss any of Toby’s BFFs? Tell us in the comments!