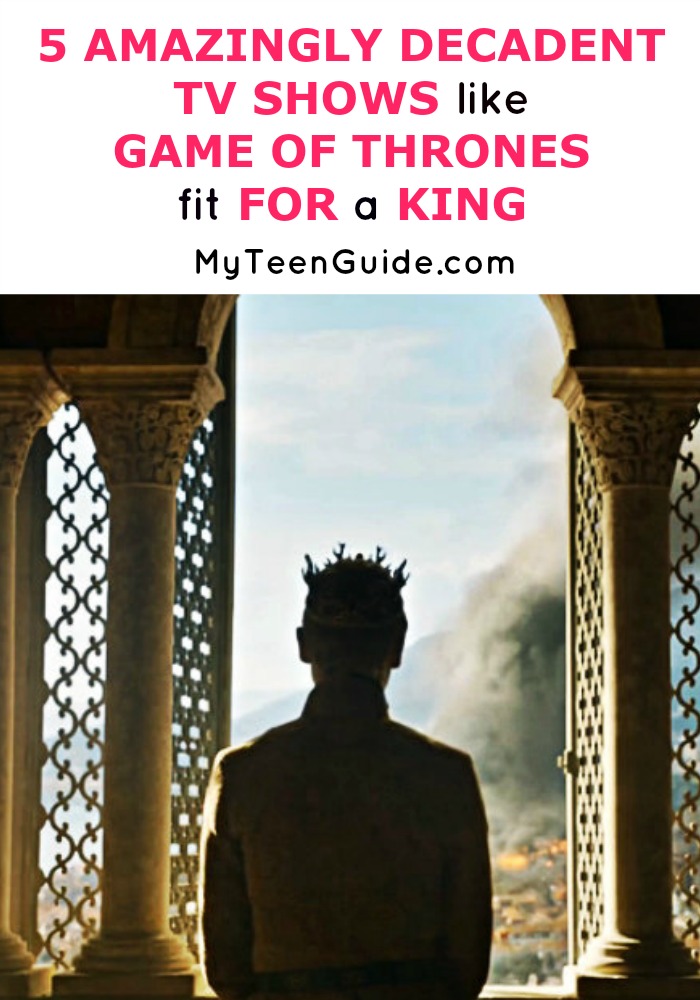 Game of Thrones is killing my heart right now, and I need some TV shows like it just to mend. Do we really need to wait until next May for the next episode? Until then I’ll catch up with some other shows to watch. After this year’s intense season, I need some more TV shows that are deadly, rich in drama and have enough adventure and twists to keep my head spinning. So patch up your bleeding dragon heart, then and read on Game of Thrones fans! Get your TV list ready!

Game of Thrones is a fantasy drama television series that is adapted from the fantasy novel series, A Song of Fire and Ice by George R. R. Martin. The show is featured on HBO, premiered on April 17, 2011, and just ended its 6th season on June 26, 2016. The series is set in the fictional continent of Westeros and chronicles noble families and their violent struggles to claim the Iron Throne. Game of Thrones features a large ensemble cast, including Peter Dinklage, Lena Headey, Kit Harrington, Emilia Clarke, Sophie Turner, Maisie Williams and Nikolaj Coster-Waldau. Here are some TV shows like Game of Thrones.

The Tudors is a historical fiction television series that aired for four seasons on Showtime, from April 1, 2007, to June 20, 2010. The series is set mainly in England during the 16th century and is based on King Henry VIII of England reign. The Tudors stars Jonathan Rhys Meyers, Maria Doyle Kennedy, Natalie Dormer, Henry Cavill and James Frain. This is on my top list of shows to watch, I could srsly watch it over and over. Natalie Dormer is ah-mazing as Anne Boleyn!

Spartacus is a television series that aired on Starz for three seasons from January 22, 2010, to April 12, 2013. The series was inspired by Spartacus, a gladiator who headed up a slave uprising against the Roman Republic. It showcases Spartacus and his life that led to the uprising. Spartacus stars Liam McIntyre, Manu Bennett, Peter Mensah, Lesley-Ann Brandt, Nick E. Tarabay, John Hannah, Craig Parker, Viva Bianca and Lucy Lawless.

Black Sails is a dramatic adventure television series that premiered on Starz on January 25, 2014. Season 3 wrapped up on March 26, 2016. The series is a prequel to the 1883 adventure novel, Treasure Island, by Robert Louis Stevenson. It is set to take place about 20 years prior to the events in Treasure Island and tells the tale of Captain Flint and his gang of pirates. The series stars Toby Stephens, Hannah New, Luke Arnold, Jessica Parker Kennedy, Tom Hopper, Toby Schmitz and Clara Paget. My friend recommened this as one of her favorite shows to watch. I haven’t seen it but she spoke so excitedly about it I had to include this show!

Vikings is a historical drama televisions series that premiered on History Channel on March 3, 2013. The first half of season 4 concluded on April 21, 2016, with the second half to later in 2016. The series was inspired by Ragnar Lothbrok, a Viking, who became a legendary hero in England and France. It showcases the life of Ragnar Lothbrok, starting out life as a farmer and his eventual rise to fame as a Scandinavian King. Vikings stars Travis Fimmel, Katheryn Winnick, Clive Standen, Alyssa Sutherland and Gustaf Skarsgard.

Rome is a historical drama television series that aired for two seasons on HBO, from August 28, 2005, to March 25, 2007. The series is set in 1st Century B.C., during the time of when Ancient Rome transitioned to Empire from Republic. Rome features an ensemble cast including Kevin McKidd, Ray Stevenson, Polly Walker, James Purefoy, Tobias Menzies, Lindsay Duncan, Rick Warden and David Bamber.

Thank goodness for this list, I could watch The Tudors over and over again! Have you seen any of these shows like Game of Thrones? Tell me what you will be watching until GoT comes back in the comments!