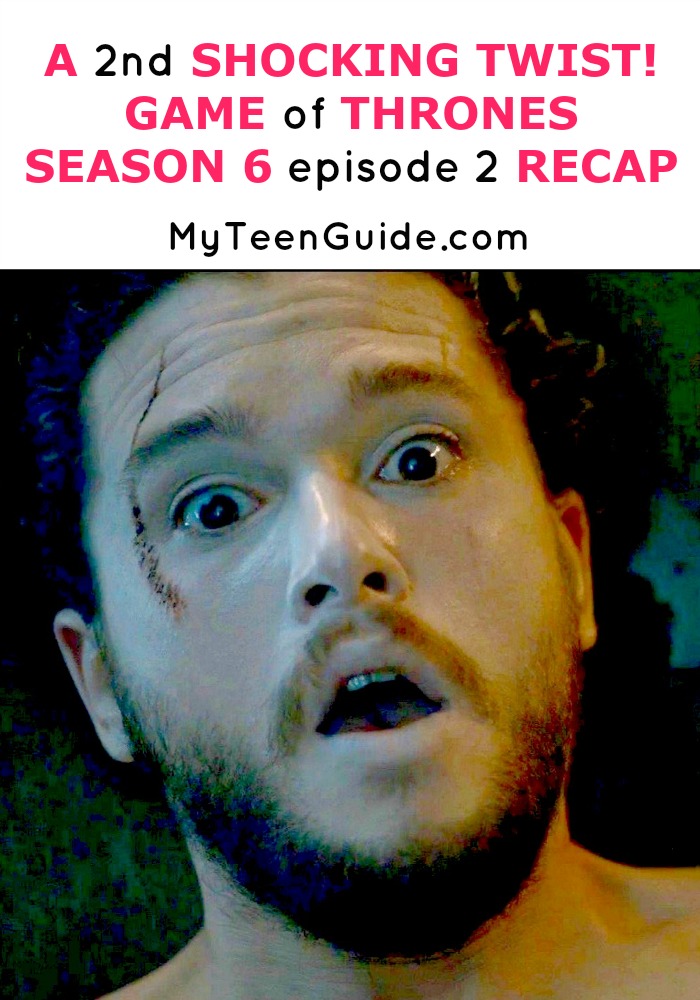 Game of Thrones fans if you missed last night’s episode, a lot went down! You don’t have to be in suspense for too long because I have the full Game of Thrones Season 6 Episode 2 recap. There are some major spoilers this week, so as always if you haven’t yet watched the episode you may want to put your fingers in your ears and say la la la until you do. This is the episode all of us have been waiting for since season five and gives us more than a few reasons to freak out. We are finally wrapping up last week’s episode and questions we’ve all had and I can barely keep it to myself! Ready to see the recap?

Jon Snow may be dead but at tonight’s opening, we see Bran Stark is very much alive. Talk about drama! We haven’t seen him since season four. He is working with a mentor known as the three eyed raven. In a vision, he sees his father, Eddard Stark, as a young boy practicing combat with his uncle. In this vision, he also sees Hodor as a younger man. Interestingly Hodor’s real name is revealed to be Willis, and he could say more than just Hodor!

At Castle Black, the wildlings help those loyal to Jon Snow take custody of those who murdered Jon Snow.

In King’s Landing, the funeral for Myrcella is underway, but King Tommen has his mother held in the keep in fear of her being taken again. After a discussion with his Uncle… well, his father, Jamie, to go and see his mother. The high sparrow arrives, and Jamie urges Tommen to see Cersei. The two trade of words and Jamie threatens the high sparrow. However, no blood is spilled. The exchange has a very hostile feeling in it. We can expect to see more to stem from this conversation in the future. When speaking with his mother Tommen admits he was weak and feels ashamed for letting her suffer in custody. He asks her to help him be strong.

In Meereen, Tyrion discussions the conditions of the two dragons kept in captivity below the temple after being informed they haven’t eaten since Daenerys’ left. In a shocking move to those, specifically Varys, Tyrion goes down to see the dragons. When in the dragon’s chamber he claims to be a friend of the dragon’s mother and unchains both of them. While leaving, he asks Varys to punch him in the face should he have an idea like this again.

Sansa speaks briefly with Brienne shortly before Theon reveals he is separating from them and heading home to the Iron Islands. We see Theon’s father and sister arguing over how to proceed strategically and the two strongly disagree. As Theo’s father, Balon, exits and is met by his brother, Euron, who kills him.

Back at Winterfell, Lord Bolton’s son is born. Congratulations! While congratulating his father, Ramsay murders his father and says to have it claimed to be a poisoning by their enemies.  He summons Bethany and his newborn baby brother but in true Ramsay fashion, takes them to the hounds’ cages, and has them eaten alive by the hounds.

In Braavos again nothing too new on the storyline of Arya. She is once again met with a harmless fight against the Waif. The only difference is Jaqen tests her by offering her shelter, food, and finally her eyesight back to admit her name, yet she continues to say she is nobody. She seemingly passes the test as he insists on her going with him.

Back again at Castle Black we see truthfully the moment everyone has waited for. Davos asks Melisandre if it is possible to bring Jon Snow back to life. It is at this moment she reveals her distrust in herself, claiming the victory she saw was a lie. She admits it’s possible to bring someone back but doubts her ability to do it. Ignoring the odds he insists for her to try and she agrees. As we all sit watching the screen screaming yes, we see Melisandre perform a ritual to revive Jon Snow. After some time in dissatisfaction and disappointment, it’s obvious to her that she failed. The other’s in the room watching her leaves the room after her, and the camera focuses on Jon’s Direwolf and then on to Jon’s dead body. Just before the cut of the episode, Jon Snow… wakes up.

I think the internet might have broken last night because I know I was losing it. What did you think of the Game of Thrones Season 6 episode 2 recap? Tell me in the comments!