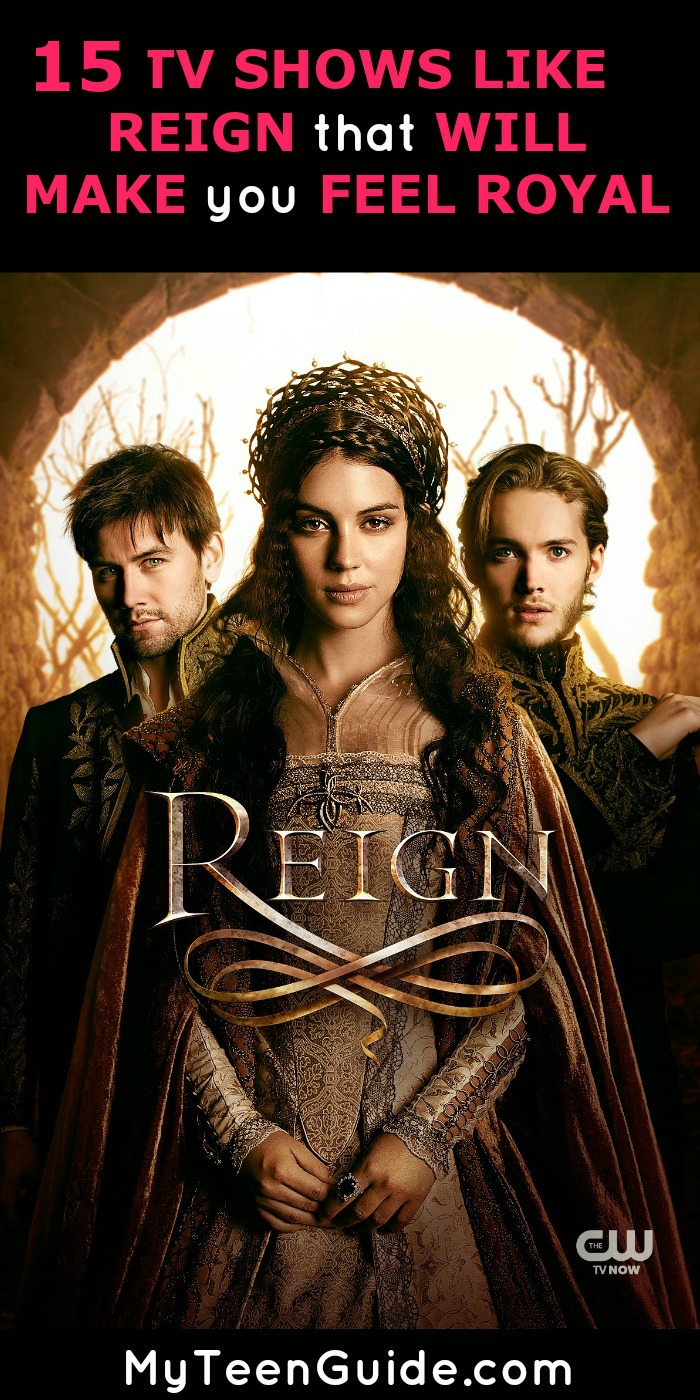 I’ve been on the hunt for TV shows like Reign ever since I binged on the entire series last month. It’s funny because I never really had an interest in historical drama type shows before watching Reign. Now, I can’t get enough of them! I’m currently watching #2 on our list, and either watched or have the others on my list. If you’re craving more historical dramas, check out these 15 awesome shows like Reign!

Reign is a historical, fantasy, romance television series that premiered on The CW on October 17, 2013. Season 3 of the series wrapped up on June 20, 2016. The series follows the early life of Mary, Queen of Scots. Reign stars Adelaide Kane. Here are some TV shows like Reign.

The Virgin Queen is a drama television series that aired on BBC for 4 episodes in 2005. The series chronicles the life of Queen Elizabeth I, especially her personal life. It’s a good place to start if you want to learn more about Elizabeth, since Reign really only touched on her life during the last two seasons. The Virgin Queen stars Anne-Marie Duff.

The Tudors is a historical fiction drama television series that aired on Showtime for 4 2. seasons, from April 1, 2007 to June 20, 2010. While the series is titled after the Tudor Dynasty overall, the series focuses on King Henry VIII of England’s reign. The Tudors stars Jonathan Rhys Meyers.  This is one of my favorite tv shows like Reign! As you’re watching, remember this rhyme to keep track of what happens to each of his brides: “Divorced, beheaded, died, divorced, beheaded, survived.”

Outlander is a drama, fantasy and romance television series that has aired on Starz, for 3 seasons so far, premiering on August 9, 2014. It is based on the incredibly popular Outlander book series by Diana Gabaldon. The series centers around the life of Claire Randall, a married nurse who in 1945 found herself sent back in time to the year 1743, where she meets Jamie Fraser, a handsome Highland warrior. Outlander stars Caitriona Balfe, Sam Heughan and Tobias Menzies.

The Borgias is a historical fiction drama television series that aired on Showtime for 3 seasons, from April 3, 2011 to June 16, 2013. The series follows the lives of the Borgia family, a crime family from Italy, during the 15th century. The Borgias stars Jeremy Irons, Francois Arnaud, David Oakes, Holliday Grainger and Colm Feore. Of all the tv shows like Reign, this one is the most different because it focuses more on an infamous family of criminals than an infamous family of royals!

I started watching this one right after Reign, but took a break from it because I didn’t want to travel back in time quite so far just yet. The Last Kingdom is a historical, adventure, romance drama television series that has aired on BBC America, for 2 seasons so far, premiering on October 10, 2015. Season 2 of the series is set to air some time in 2017. It is based on the book series The Saxon Stories by Bernard Cornwell. The series focuses on Uhtred of Bebbanburg, who is torn between his loyalties to his birthright and his upbringing. The Last Kingdom stars Alexander Dreymon. If you want to know where royalty began in England, this is the show to watch!

Poldark is a British historical, romance, drama television series that has aired on BBC One for 3 seasons so far, premiering on March 8, 2015. So far, the series has been based on the first 6 books in the Poldark book series, which total 12 books, by Winston Graham. The series revolves around Captain Ross Poldark, who return to his home in Cornwall, England after spending 3 years fighting in the American Revolutionary War. Poldark stars Aidan Turner.

Victoria is a British biographical, historical, drama television series that has aired on ITV for 2 seasons so far, premiering on August 28, 2016. The series centers on the early years of Queen Victoria (the woman who started the Victorian Era trends), from her accession to the throne at an early age, to her marriage to Prince Albert. Victoria stars Jenna Coleman. This is the one to watch if you love Jane Austen books and movies, since they all took place during the Victorian era.

The White Queen is a British historical fiction television series that aired on BBC One for 1 season, from June 16, 2013 to August 18, 2013. It is based on books 7, 8 and 10 of The Plantagenet and Tudor book series, which total 15 books, by Philippa Gregory and is the prequel to The White Princess. The series centers around Elizabeth Woodville, Lady Anne Neville and Lady Margaret Beaufort, three women who are vying for the throne.  The White Queen stars Rebecca Ferguson, Faye Marsay and Amanda Hale.

The White Princess is a British historical fiction television series that aired on Starz for 1 season, from April 16, 2017 to June 4, 2017. It is based on the 2013 book, of the same name, by Philippa Gregory and is the sequel to The White Queen. The series focuses on Elizabeth of York and her marriage to King Henry VII. The White Princess stars Jodie Comer.

The Crown is a biographical drama television series that has aired on Netflix for 1 season so far, premiering on November 4, 2016. It is based on the 2006 movie, The Queen, starring Helen Mirren. The series follows the life of Queen Elizabeth II, from her wedding to Prince Philip in 1947 to the present day. The Crown stars Claire Foy.

The Royals is a drama television series that has aired on E! for 3 seasons so far, premiering on March 15, 2015. The series showcases the fictional British Royal Henstridge Family and takes place in modern-day London, England. The Royal stars Elizabeth Hurley and Vincent Regan.

Downton Abbey is a historical, period drama television series that aired on PBS for 6 seasons, from September 26, 2010 to December 25, 2015. The series chronicles the Crawley Family, a British aristocratic family, as well as the family’s domestic servants. Downton Abbey stars Hugh Bonneville and Elizabeth McGovern.

Camelot is a historical, fantasy, drama television series that aired on Starz for 1 season, from February 25, 2011 to June 10, 2011. The series revolves around Arthur, the son of King Uther, who is appointed King after his father’s death, much to the dismay of his ruthless half-sister, Morgan Pendragon. Camelot stars Jamie Campbell Bower and Eva Green.

The Pillars of the Earth is a historical drama television series that aired on Starz for 1 season, from July 23, 2010 to August 27, 2010. It is based on the 1989 book, of the same name, by Ken Follett and is the prequel to World Without End. The series centers on the power struggles and religious conflicts of the citizens of the town of Kingsbridge, England, during The Anarchy War. The Pillars of the Earth features an ensemble cast, including Ian McShane, Rufus Sewell, Eddie Redmayne and Donald Sutherland.

World Without End is a historical drama television series that aired on the Reelz Channel for 1 season, from September 4, 2012 to October 23, 2012. It is based on the 2007 book, of the same name, by Ken Follett and is the sequel to The Pillars of the Earth. The series centers around the citizens of the town of Kingsbridge, England, during the Hundred Years’ War, including King Edward III. World Without End stars Blake Ritson.

Of all these shows like Reign, I recommend starting with The White Queen followed by the White Princess, then following it up with The Tudors. Historically speaking, they all kind of tie into each other. Without the women of White Queen, there would be no Tudor line. Without the Tudors, we wouldn’t have Mary Queen of Scots.

Do you have any other favorite TV shows like Reign? Tell me in the comments so I can check them out!