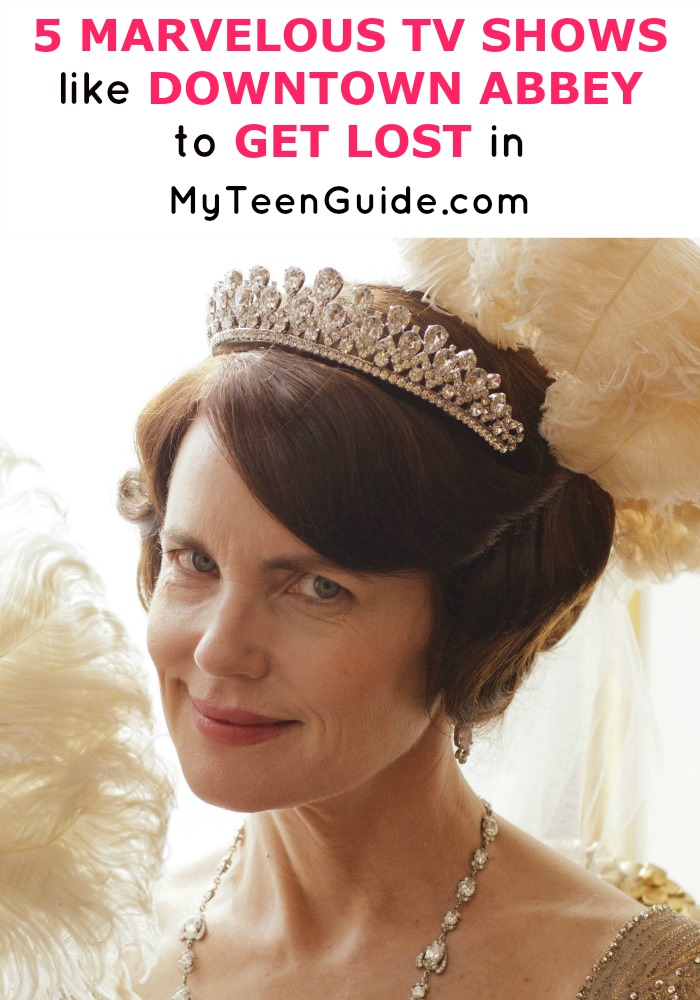 Downtown Abbey fans are a dedicated bunch, but with this magical period drama ending last year, you might be looking for other TV shows like it to feel the void. I understand, I was super sad to see Downton Abbey finish too. How do I live without watching the Dowager Countess get another one of her one-liner digs in? ”At my age, one must ration one’s excitement.” It’s giving me life every.single.time she throws out one of those lines. I’ve put together of a few TV show I’ve watched to distract me from the fact that one of my favorite shows is gone, and I bet you’ll like watching these tv shows like Downtown Abbey too! Check out the list below.

Related: Amazing British Movies To Watch If You Are Slightly Obsessed With Downtown Abbey

5 Marvelous TV Shows Like Downtown Abbey To Get Lost In

I finally made it. #highclere #highclerecastle #downtonabbey #england

Downtown Abbey is a historical period drama television series that aired for 6 seasons starting on iTV on September 26, 2010 and concluded on PBS on December 25, 2015. The series showcases the Crawley family and their domestic servants in the early part of the 20th century, as they deal with some of the biggest events in history. Downtown Abbey stars Hugh Bonneville as Robert Crawley, Laura Carmichael as Lady Edith Crawley, Michelle Dockery as Lady Mary Crawley, Elizabeth McGovern as Cora Crawley, Maggie Smith as Violet Crawley and Penelope Wilton as Isobel Crawley. Here are some other TV shows like Downtown Abbey.

Related: 5 Amazingly Decadent TV Shows Like Game Of Thrones Fit For A King

Mr. Selfridge is a period drama television series that aired for 4 seasons starting on iTV on January 6, 2013 to March 11, 2016. The series showcases the real-life story of Harry Selfridge, the founder of London’s department store Selfridge, set in the 1910’s. Mr. Selfridge stars Jeremy Piven as Harry Selfridge.

Related: 5 TV Shows Like Reign That Will Make You Feel Royal

Call the Midwife is a period drama television series that concluded its 5th season on March 6, 2016. The series premiered on January 15, 2012 and airs on BBC One. It showcases the lives of a group of nurse midwives in London’s East End from the latter part of the 1950’s through the early part of the 1960’s. Call the Midwife stars Helen George as Beatrix Franklin, Jenny Agutter as Sister Julienne, Laura Main as Sister Bernadette, Judy Parfitt as Sister Monica Jean and Jessica Raine and Vanessa Redgrave as Jennifer Lee. I watched this show on Netflix. This is totally worth watching, but I found the episodes to be very emotional too! Keep the tissue box handy, but it’s so good!

The Paradise is a costume drama television series that aired for 2 seasons on BBC One from September 25, 2012 to December 8, 2013. It showcases the personal and private lives in and around The Paradise, department store, set in 1875. The Paradise stars Joanna Vanderham as Denise Lovett, Emun Elliott as John Moray, Elaine Cassidy as Katherine Glendenning, Peter Wight as Edmund Lovett and David Hayman as Jonas Franks. Why did they stop this show, it was so good! I just finished binge watching it on Netflix! As I wrote this post, don’t worry I won’t ruin the ending!

A Place to Call Home

A Place to Call Home is a television drama series that premiered on Seven Network on April 28, 2013. The series is now shown on Showcase and season 4 is set to start on September 11, 2016. The series is set right after the end of the Second World War and surrounds on Sarah Adams, who moves back to Australia after being aboard for 20 years. She ends up clashing with Elizabeth Bligh, a wealthy matriarch. A Place to Call Home stars Marta Dusseldorp as Sarah Adams and Noni Hazlehurst as Elizabeth Bligh. I’ve only season season one of this series, but I’m excited to see more!

Lark Rise to Candleford is a costume drama television series that aired on BBC One for 4 seasons, from January 13, 2008 to February 13, 2011. It is based on the semi-autobiographical books Lark Rise in 1939, Over to Candleford in 1941 and Candleford Green in 1943 by Flora Thompson. The series and the books showcase the lives of the folks that live in the countryside in Oxfordshire and Buckinghamshire England, at the end of the 19th Century. Lark Rise to Candleford stars Olivia Hallinan as Laura Timmins, Julia Sawalha as Dorcas Lane, Claudie Blakely as Emma Timmins, John Dagleish as Alf Arless, Linda Bassett as Victoria May Warrener Turrill, Karl Johnson as Thomas Turrill and Mark Heap as Thomas Brown.

So are you a Downton Abbey fan? What do you think of these TV shows like Downton Abbey? I myself loved the Paradie and Call The Midwife, I think those are my favorites on the list! Tell me your favorites down in the comments!