Get ready for all the Venom movie quotes, trivia, and cast info you can handle!

On October 5th , fans everywhere will get the chance delve deep into the backstory of one of Marvel Comics‘ baddest baddies.

If you love a good origin story as much as I do, you’ll be first in line to catch Venom when it releases!

Until then, read on to learn everything about the movie…and the talent behind it!

RELATED: Can You Ever Forgive Me- Cast, Quotes and Trivia Guide 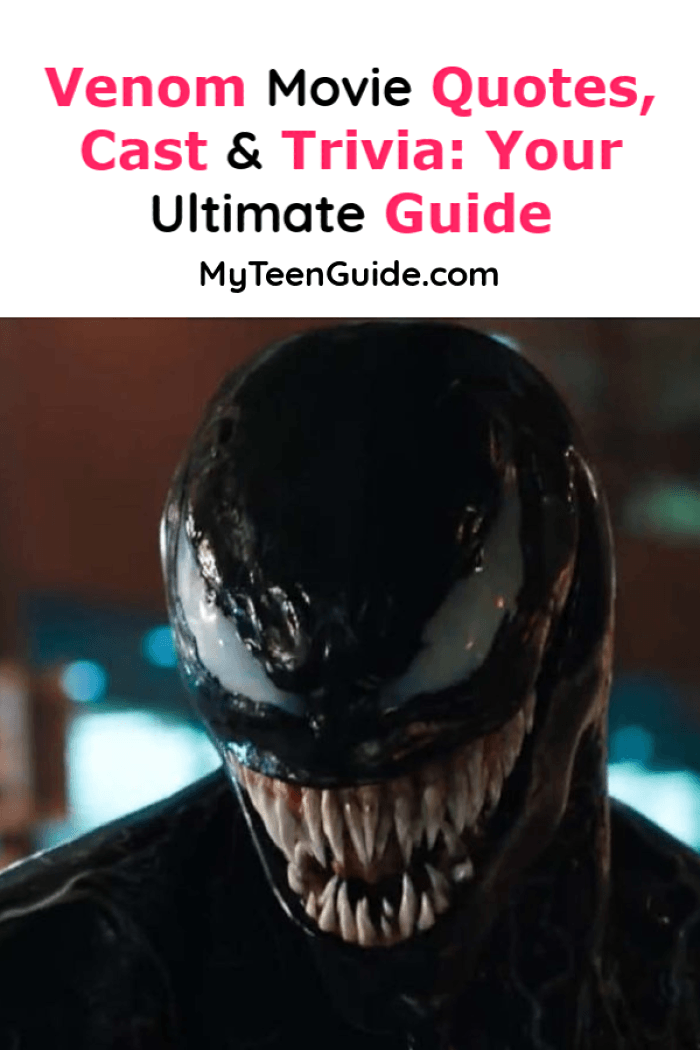 Venom is an upcoming action, horror, sci-fi, superhero movie that is based on the Venom character from Marvel Comics. The movie focuses on Eddie Brock, a journalist who comes into contact with an alien, parasitic Symbiote and the two bond together, creating Venom, a grotesque and repulsive vigilante.

I have to say, Venom always gave me the creeps! While Redditors are pretty vocal about Green Goblin ranking as the #1 arch-nemesis of Spidey, with Doc Ock following as a close second, you really can’t count Venom out of the race.

Read on to learn about the cast of Venom, then check out some great quotes & trivia! Don’t forget to sign up for a Fandango Fan Alert so you can be the first to grab tickets!

Eddie is an investigative journalist who is looking into the harmful human experiments of the scientific company- The Life Foundation. Who doesn’t love Tom Hardy? He is one of my favorite actors.

Anne is Eddie’s girlfriend, who is employed by a firm that has ties to The Life Foundation.

Blake is the head of The Life Foundation; a scientist who dislikes humankind and has a fascination with symbiotes.

Skirth is a scientist working at The Life Foundation.

Dr. Carlton Drake, as a voiceover in the movie trailer:

Dr. Drake- “Thank you for bringing us collectively to this moment. It is a moment that so many have dreamed of claiming. History starts today.”

2. Eddie Brock, as a voiceover in the movie trailer:

Eddie- “I am a reporter. I follow people that do not want to be followed.”

Dora- “We found something. We call them symbiotes. Carlton Drake believes that the union between human and symbiote is the key to our evolution.”

Eddie Brock, as a voiceover in the movie trailer:

Eddie- “I’m Eddie Brock. I’m a reporter and I always seem to find myself questioning something the government may not be looking at. I found something really bad and I have been…taken.”

5. Dr. Carlton Drake, as a voiceover in the movie trailer:

Dr. Drake- “Look around at the world, who do you see? A planet on the brink of collapse. Human beings are disposable! But man and symbiote combined? This is the new race, a new species, a higher lifeform.”

6. Conversation between Eddie and Venom:

Eddie- “What do you want from me?”

7. Conversation between Eddie and Venom:

Venom- “Look into my eyes, Eddie. The way I see it, we can do whatever we want. Do we have a deal?”

8. Conversation between Eddie and Anne Weying:

Anne- “You have no idea how much you’re scaring me right now.”

If the trailers are any indication, this is going to be a sell-out movie!

The trailers have an epic number of views!

It could be the biggest movie of October…ever

According to Box Office Pro predictions, Venom could potentially gross between $60 million and $85 million at the box office on its opening weekend.

Give props to the original Venom, please!

Tom Hardy isn’t the first actor to play the role of Eddie Brock/Venom.

Not the first time playing a super hero!

This is the second superhero-themed movie that both Tom Hardy and Jenny Slate have appeared in. Both were in DC Comics Batman films.

Talk about an award-winning cast!

Are you crazy excited for this Marvel villain movie? Have you heard any other great Venom movie quotes or trivia? Share below!